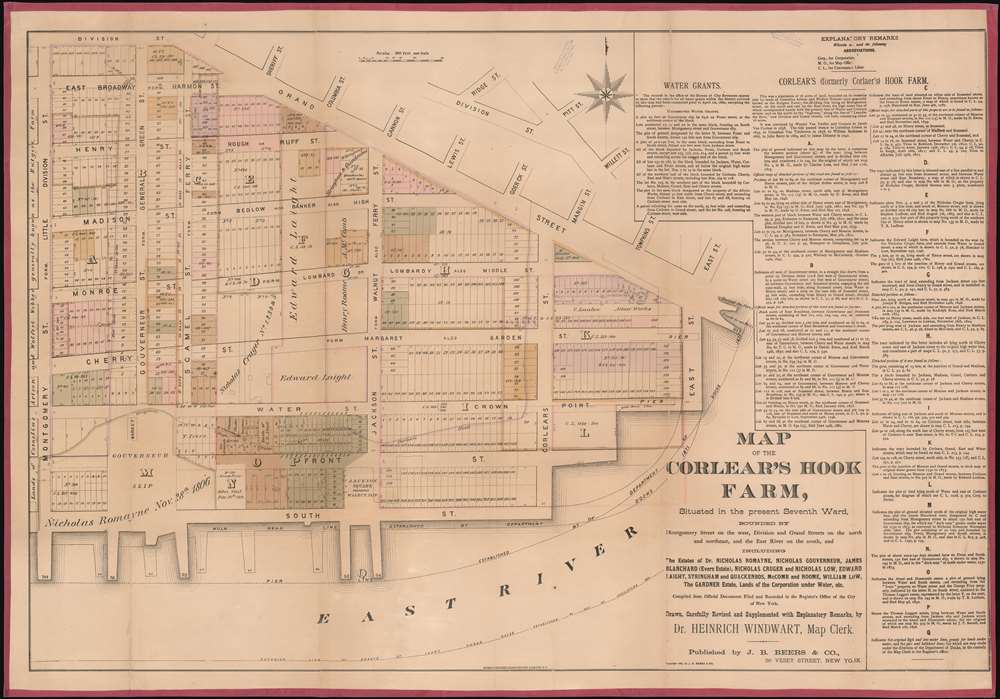 This is a rare 1881 Heinrich Windwart map of the New York City's Lower East Side, from Grand Street to the East River and from Montgomery to East Street, a region once known as the Corlear's Hook Farm. This is most likely the earliest specific published map if this part of New York. The meticulously compiled map illustrates multiple estates, including those of Nicholas Romayne, Nicholas Gouverneur, James Blanchard, Nicholas Cruger, Nicholas Low, Edward Laight, Stringham, Quackenbos, McComb, Roome, Willima Low, and the Gardner state. It illustrates the original waterline of Manhattan before the mid-19th century landfills. IN addition, it shows underwater lands belonging to the Corporation of New York according to the legislative act of 1871.

In the early 19th century most of Manhattan was undeveloped farm lands, the property of wealthy landowners with claims dating to the Dutch period of New York's history. The northern 2/3rd Manhattan was dotted with farmlands and sprawling gentlemanly estates, many with great manor houses overlooking the Hudson River. The Commissioner's Plan of 1811 and the 1807 Commission Law, laid the street grid through many of these properties and gave the city the right to claim these lands under eminent domain, providing due compensation to the landowners. While this work occurred early in lower Manhattan, central and upper Manhattan were not formally acquired by the city until the mid-19th century.

Why These Maps were Made

Several entrepreneurial mapmakers, among them John Bute Holmes, Heinrich Windwart, Richard D. Cooke, and James Botsford Beers, became fascinated by the early history of Manhattan real estate ownership, recognizing the wealth to be accrued by accurately understanding the history of city land ownership, division, and inheritance. Many of these cartographers, especially Holmes, allied themselves with the corrupt Tweed administration, assuring even greater wealth and political power from the eminent domain seizure of old Manhattan estates. The cartographers created a series of maps, reminiscent of John Randall's 'Farm Maps', overlaid with property data, showing the borders of old estates, and notating the breakup of the lands among various heirs. The complex work of compiling the maps earned many of them a fortune. One newspaper writing of the Holmes estate after his 1887 death that some of the individual maps were worth more than 30,000 USD.

This map was laid out by the map clerk Heinrich Windwart and published in New York by James Botsford Beers. The engraving and printing is the work of Neuman and Dinglinger Lithography. This map is exceedingly rare. There are only tjree examples cited in the OCLC, at the University of Wisconsin, Stony Brook University, and the New York State Library. We are aware of a 3rd uncatalogued example at the New York Public Library.

Heinrich Windwart (July 12, 1810 - April 30, 1881) was a German civil servant, revolutionary, medical doctor, and map publisher. He was born in Bavaria and studied at the University of Jena. He was heavily involved in the German Revolutions of 1848. When the revolutions were suppressed, he went into exile, first in Switzerland, then France, and ultimately, in 1853, to the United States. He initially settled in Baltimore, but moved to New York in the 1860s when his fellow German 'Forty-Eighter,' Franz Sigel (1824 - 1902), was elected Registrar of New York City, and offered him a clerk position. Windwart was one of several map publishers, the most famous of whom was John Bute Holmes, who was able to leverage cartographic skill to capitalize on the New York City transition from grand 18th century estates to the meticulously gridded and plotted structure of the Commissioner's Plan. Learn More...


Neuman and Dinglinger Lithography (fl. 1880 - 1882) was a New York City based lithography and engraving firm based at the Northwest corner of Pearl and Elm Streets, New York City. Little is known of their business. They published an important chronological chart of American history, as well as maps for James Botsford Beers (1811 - 1901) and John Bute Holmes (1822 - 1887). In addition to maps, they also produced stunning chromolithograph trade cards for the tobacco industry. Most of their work dates to the early 1880s. Learn More...