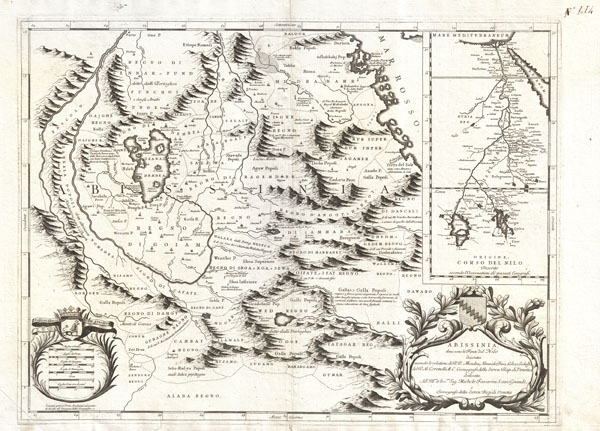 The first map to accurately depict Abyssinia and the source of the Blue Nile.

This is Coronelli's important 1690 map of Ethiopia (Abyssinia) showing the source of the Blue Nile. This map, focusing on Lake Tana (Tzana Dembea) covers the Ethiopian highlands from Derbeta on the Red Sea south as far as the tribal kingdoms of Sugame, Bahargamo and Gumar, all of which are located in modern southern Ethiopia. Europeans, Coronelli included, had a great interest in this region not only because of common conjecture regarding the source of the Nile, but also as a potential site of the Kingdom of Prester John. Though often underappreciated by historians, this is a highly significant map in the development of African cartography and, from the early 18th century on, most cartographers followed its example with regard to this important region - one of the few parts of sub-Saharan Africa to be accurately represented on maps prior to the late 19th century.

Coronelli claims that this is the first map to accurately depict the sources of the Nile and, at least as regards the Blue Nile, we see no reason to dispute his claim. The cartography here is based upon the travels of Portuguese Jesuits Manuel de Almeida, Affonso Mendez, Pedro Páez, and Jerónimo Lobo, who traveled throughout Abyssinia in the mid 16th century. Coronelli correctly recognizes the importance of Lake Tana (Tzana Dembea) as well as the curious turn in the river that actually causes the Blue Nile to start it course as a southerly flowing river. The actual fonts of the Nile itself appear to the southwest of Lake Tana. The Falls of the Blue Nile, now a popular tourist destination in Ethiopia, are noted just south of the Lake.

In the upper right quadrant Coronelli contrasts his perspective on the region with the traditional Ptolemaic representation of the Nile River stemming from two great lakes south of the Equator. Ironically, both perspectives are somewhat correct. Coronelli's representation of Abysinnia is highly accurate with regard to the course of the Blue Nile and its sources. On the other hand, along with the Ptolemaic theory, Coronelli seems to ignore the entire White Nile which meanders into non-existence in the extreme left hand quadrants of the map. The Ptolemaic perspective depicted on the upper right, though it is based on speculative accounts dating to antiquity, actually offers a fairly accurate representation of the White Nile's course northward from Lake Victoria, which is in fact located just below the Equator.

Coronelli's map also offers much of interest beyond its intended purpose - that is to show the course of the Nile. A number of the earliest Ethiopian towns, cities, monasteriesc,and kingdoms, many of which still exist, are in evidence. These include Axum, Asmara, Gojiam, di Cafate (Kaffa), di Ganz , di Dembea (north of Lake Tana), Tigre, di Amhara (welo), Ifat, Guraghe, Damot, Balli, Dawaro, Sugamo (Sidamo?), Angot, Bagemder and Midrabahr ( Bahrmedr), among others. Curiously the map does not name the early Abyssinian capital city of Gondar, though the tent encampment of the King is roughly identified in the same location.

A decorative title cartouche appears on the lower right quadrant. Another cartouche, showing a no less than six distance scales adorns the lower left. This map was issued as plate no 114 in Coronelli's stupendous 1690 Atlante veneto