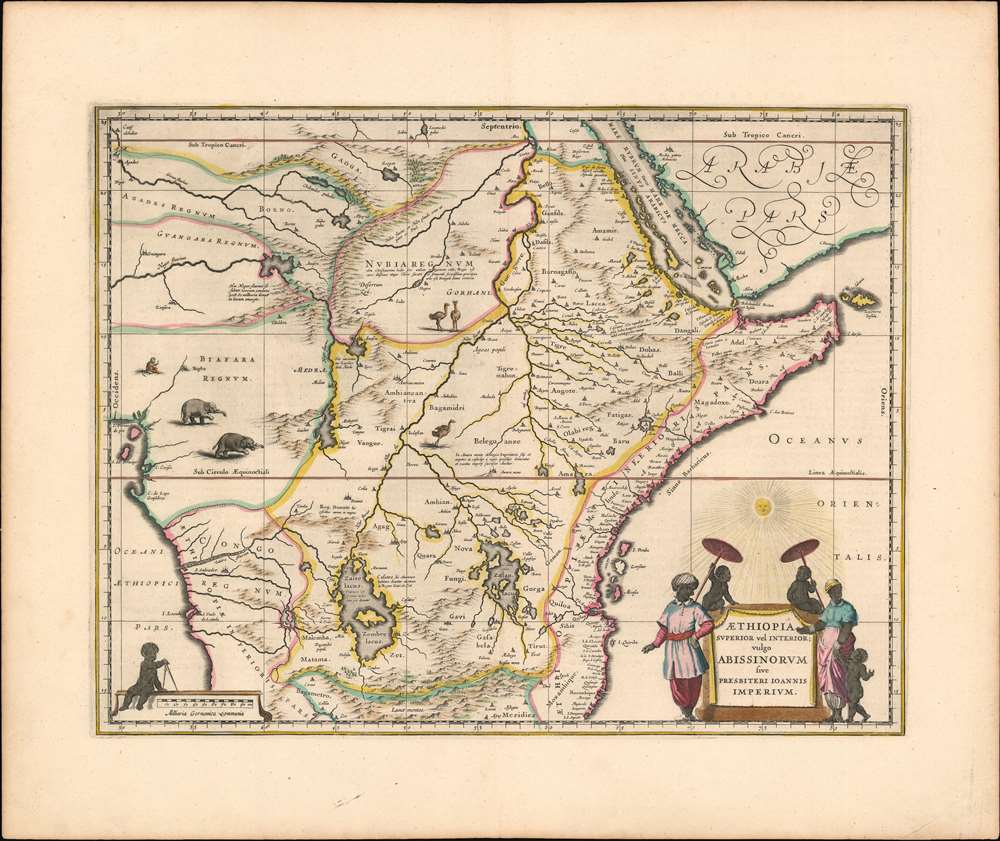 The Mythical Kingdom of Prester John, in a Superb Example.

This is the map of the mythical Kingdom of Prester John in eastern Africa, issued by Willem Blaeu in 1635, in a beautiful original color example. The map covers from the Bight of Benin to the Indian Ocean and from Arabia and the Red Sea to Mozambique. It includes two decorative cartouches as well as stylized images of African fauna, including elephants, monkeys, and ostriches. While the African coast exhibits considerable advances over earlier maps of the region, the interior of Africa exhibits a cartography primarily based on the literature of antiquity and little changed from the days of Ptolemy, and its primary subject matter is that of legend.

This map frames the legendary Kingdom of Prester John (Presbiteri Ioannis) – a persistent and popular figure in European folklore. The legend of Prester John dates to about 1145 when a Syrian priest named Hugh traveled to Europe to canvas for a Fifth Crusade. Hugh described Prester John as a great Christian king whose empire was located somewhere in India – the idea being that the two great Christian empires, that of John and that of the Pope, would together make war on the Saracens occupying the Holy Land, thus sandwiching the enemy between their two indomitable armies. About 20 years later a curious letter began to circulate around Europe, purportedly by John himself, wherein the mythical King claimed to be some 562 years old and the ruler of the Three Indias. 'India' at this time referred not just to the subcontinent, but much of southern Asia. It was divided into three parts, Farther India or what is today India and Southeast Asia, Nearer India or the modern-day Middle east, and Middle India or the parts of Africa to the east of the Nile River. Having failed to pinpoint the Kingdom of Prester John in Asia, scholars as early as the 14th century began locating John's Kingdom in east Africa. Here they had a bit luck for explorers in the region, starting with the Francisco Alveres of Portugal in the 1500s, soon came into to contact with the Christian Solomonic Kings of Ethiopia or Abyssinia. The Coptic Ethiopian emperor David II fit the mold of the 'Prester John,' and Alveres believed him to be a descendent of the legendary John, thus firmly entrenching the mythical kingdom Prester John on maps of east Africa well into the 18th century. Abraham Ortelius committed the kingdom to a printed map in 1573, and his depiction of the kingdom remained sufficiently canonical for Blaeu to produce this modernized depiction of it using his own map of Africa for a framework.

Cartographically this map is derived from Blaeu's own 1608 wall map of Africa – one of the most important maps of the continent ever drawn. Most of the interior details offered here, notably the course and sources of the White Nile and its source in two great lakes, are derived from classical texts such as Ptolemy’s Geographia. The Lake of Zaire (Zembre Lacus) and Lake Zaflan, themselves appear in the foothills of the Mountains of the Moon or Lunae Montes, located at the base of the map. The Blue Nile, which has its source is modern day Ethiopia, is expressed as a complex network of rivers and valleys bearing little resemblance to reality - though the observer will note that many of the place names, Amara, Tigre, Dobas, and Dangali, do in fact reflect real places and are still in use today. Blaeu also draws a lake at the source of the Niger River, set just north of the West African Kingdom of Biafara, but fails to properly connect the river to its southern extension – which is vaguely noted.

This map first appeared in Blaeu’s Atlas Novusin 1635, continuing to appear in that work and in Joan Blaeu’s Atlas Maior throughout the existence of the firm. This example appeared in one of the Dutch editions of Atlas Novus, as early as 1642. It is well represented in institutional collections, although examples of this quality have become difficult to find on the market.

Blaeu, W., Atlas Novus, (Amsterdam, 1642)     The classic Dutch atlas, whose publication ushered in the Dutch golden age of cartography. Willem Jansz Blaeu had been, since 1604, producing engraved maps for sale; these were separate issues (and all consequently extremely rare) until the publishing of Blaeu's Appendix in 1630 and 1631, which also included a number of maps purchased from the widow of Jodocus Hondius, (for example his famous iteration of John Smith's map of Virginia.) In 1634, he announced his intention to produce a new world atlas in two volumes, entitled Theatrum Orbis Terrarum, sive Atlas Novus (in an effort to invoke the successful work of the same title produced by Ortelius the previous century, while reinforcing the notion of it being a new work.) This work was published first in German in 1634, followed by Latin, Dutch and French editions in 1635. Blaeu's maps have always been noted for the quality of their paper, engraving and fine coloring, and this was the intent from the very start. The 1634 announcement of the upcoming work described it: 'All editions on very fine paper, completely renewed with newly engraved copperplates and new, comprehensive descriptions.' (van der Krogt, p,43) Many of the most beautiful and desirable maps available to the modern collector were printed and bound in Blaeu's atlases. Willem's son, Joan, would go on to add further volumes to the Atlas Novus, concurrently printing new editions of the first two volumes with additional maps, in effect making these new editions an entirely new book. Under Joan there would be nine Latin editions, twelve French, at least seven Dutch, and two German. This exceedingly successful work would be the mainstay of the Blaeu firm until 1661, at which point the work was supplanted by Joan Blaeu's masterwork Atlas Maior in 1662.