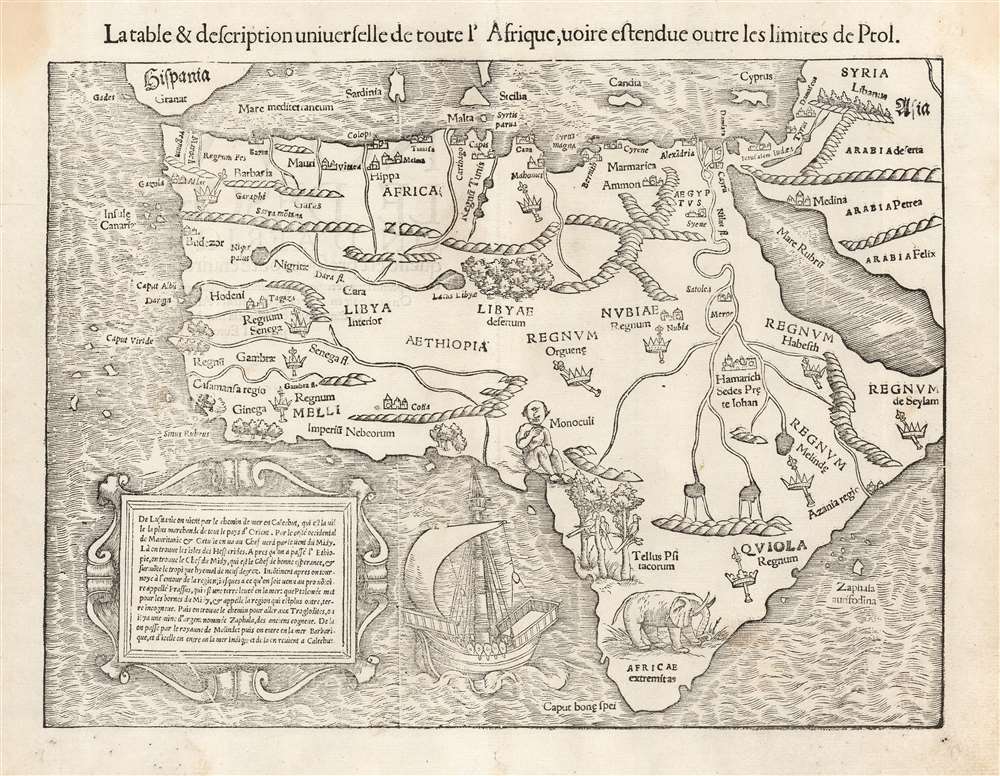 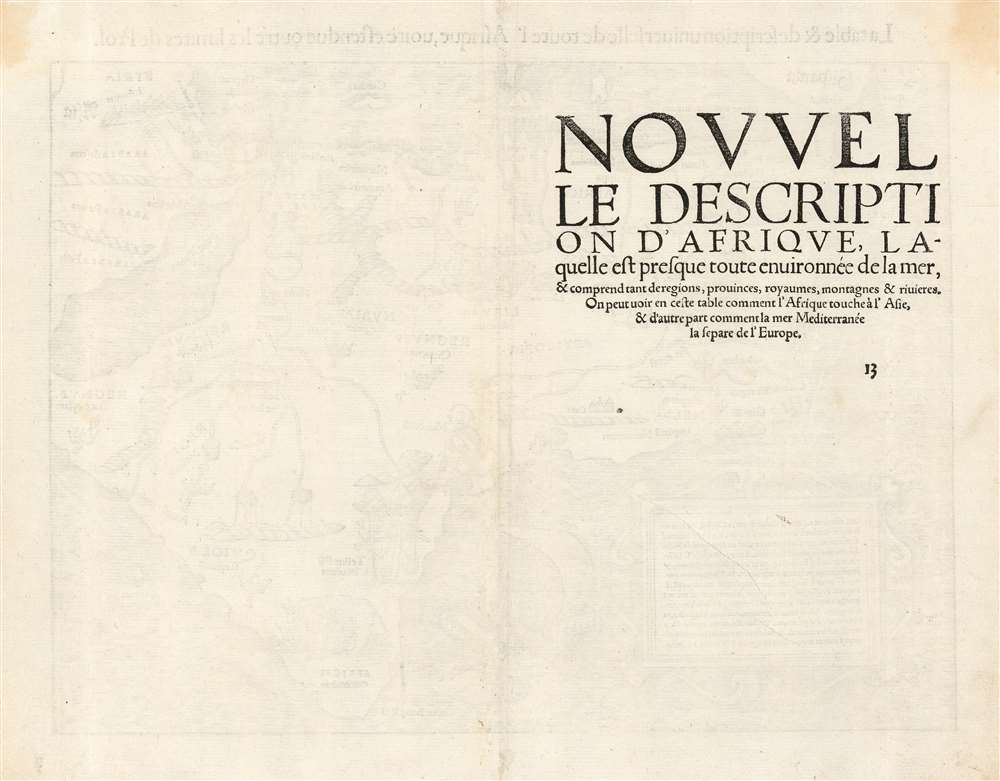 A Superb Example of the Earliest Acquirable Printed Map of the African Continent.

This is a 1552 French Cosmographie Universelle edition of Sebastian Münster's 1540 map of Africa, the earliest map of the continent available to the collector. For more than thirty years during the age of discovery, this map would be the predominant representation of Africa for the European reader. The purpose of the map was to reveal, to a lay readership, the still-momentous discoveries that the waters around Africa represented a navigable route to the Indian Ocean, a reality not known to classical geographers. The Latin title of the map emphasizes this:

'The map and description of the whole of Africa extended even beyond the limits of Ptolemy.'

Within its generally-recognizable depiction of the shape of the continent, Münster's work presents an amalgam of sources. Most of the general detail of North Africa is derived from Ptolemaic geography, as is the depiction of the Nile with its sources in the lakes of the Mountains of the Moon (Ptolemy's assumptions about the sources of that river would remain unchallenged on maps of Africa until the end of the 17th century.) Many place names in North Africa were likely drawn from Leo Africanus' 1526 Descrittione dell 'Africa, though many - for example, Garamantes - are drawn from classical historians such as Herodotus. Münster draws on Portuguese sources for west Africa. (Cadamosto's 15th century journeys there would reveal the Cape Verde Islands, which appear here.) Numerous kingdoms are noted throughout the continent and are marked by a crown and scepter. Some of these include the Arab kingdoms of Melinde and Quiola, Meroë, where the Nubian kings are said to be buried, and Hamarichthe capital of the kingdom of the mythical Christian king Prester John. In an elegant frame, Münster includes a descriptive text describing the route taken by the Portuguese around the African coast to arrive at Calicut, modern Kozhikode on the western coast of India:

From Lusitania (Portugal) one may come by sea road to Calechut, which is the greatest commercial town in any eastern country. By the western coast of Mauritania and Getulie goes south to Cap Verde. There we find the Isles des Hesperides (also called Fortunate Isles, this is a name given by the ancients to a series of islands located to the extreme west of the then known world.) After we have passed south of Ethiopia, we find the southern cape, which is is the cape of good hope, which reaches nine degrees beyond the tropic. After a tour around the region, we came upon a promontory called Prassus, which is a land raised in the sea: Ptolemy named this region at his southern limits, which were unknown lands. Then one finds the path to go to the troglodytes, where there is a silver mine called Zaphal, which the ancients knew (this island is shown on the map but referred to as 'golden'). From there one passes through the kingdom of Melinde; then we enter the Barbaric Sea and from here we enter the Indian ocean and from there we come to Calecut.

(The text is typeset, and changes typographically from edition to edition - but in all editions it appears to adhere to this same topic.)