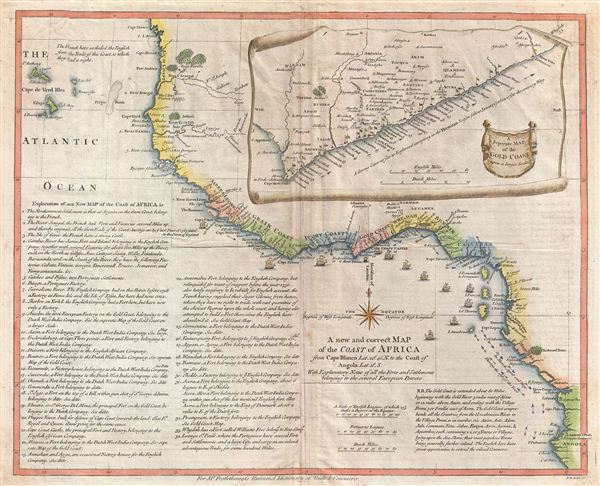 An invaluable reference to the 18th century African Slave trade.

An important and very interesting 1855 map of western Africa by the english publisher M. Postlethwayte. This map covers the west coast of Africa from Cape Blanco and the Senegal River southwards past Sierra Leone, the Grain Coast, the Ivory Coast, the Gold Coast, the Waydah, Benin, Calabar, the Seven Hill, and Majumba, to Angola. An inset in the upper right quadrant details the Gold Coast. Sailing ships can be seen plying the coast and arrows identify the seasonal trade winds. An elaborate explanation fills the lower left quadrants, with fortifications and settlements along the coast numerically referenced.

This map in an invaluable reference for anyone interested in the African slave trade of the mid-18th century. The fortifications noted along the African coasts are all slave ports. The document breaks down which country and company control each fort, occasionally providing a short history and context within the slave trade. For example with regard to Annemboc Fort, on the Gold Coast, Postlethwayte says

Annemboc Fort, belonging to the english Company, but relinquished for want of support before the year 1730. Also lately necessary to be rebuilt for english account, the French having supplied their Sugar Colonies from hence, where they have no right to trade with vast quantities of the choicest Negros upon the whole coast, and having attempted to build a fort there since the english have abandoned it.This map was engraved by R. W. Seale for issue in Postlethwayte's 1755 edition of the Dictionary of Commerce.