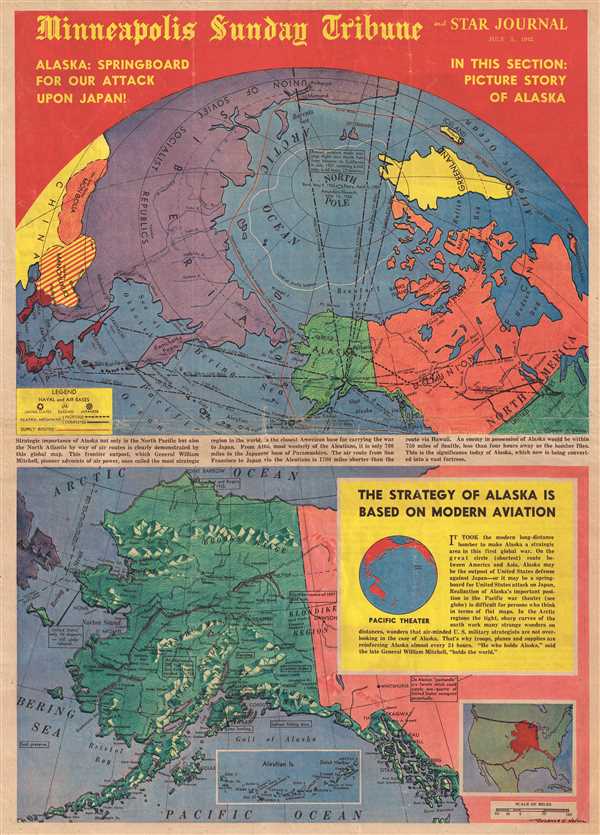 Propaganda map emphasizing the importance of Alaska in the fight against Japan.
$350.00

This is a Warner S. Nelson and Minneapolis Sunday Tribune and Star Journal front page with two maps printed on it from July 5, 1942. The top map depicts a polar map of the North Pole, illustrating Asia and North America, labeling the U.S.S.R., Mongolia, China, and Manchukuo in Asia and Alaska, Canada, and the United States in North America. Meant to explain the strategic importance of Alaska in the current war (World War II), air routes from Anchorage are illustrated to Moscow, Berlin, Rome, London, Los Angeles, Tokyo, Vladivostok, Minneapolis, and New York. The summer aid route from Seattle to Archangel is illustrated in red. The caption informs the reader that Alaska is 1700 miles closer to Japan by air than Hawaii, and that it is only 750 miles by air from Seattle – less than four hours by bomber, per the caption. These distances reflect Alaska's importance in America's war, and why it is 'being converted into a vast fortress.'

The bottom map is a specific map of Alaska. This map depicts the region from Asia (Russia – U.S.S.R.) to the Klondike and from the Arctic Ocean to the Pacific Ocean. Numerous locations throughout Alaska are labeled, including Anchorage, Juneau, Seward, and Point Barrow. The Brooks Range, the Alaska Range, the Sischu Mountains, and the Cugach Mountains are also labeled. Several text boxes inform the Sunday Tribune's readers about the importance of Alaska, such as that it contains the only tin deposits in the United States and that forests on the Alaska panhandle could supply one quarter of the United States' newsprint perpetually. A text box, entitled, 'The Strategy of Alaska is Based on Modern Aviation' discusses the concept of the 'great circle' routes in aviation and that arctic air travel routes are shorter dur to the 'tight, sharp curves of the earth' closer to the pole. A small inset map superimposes Alaska over the continental United States, providing an idea of the relative size of the state versus the continental U.S.