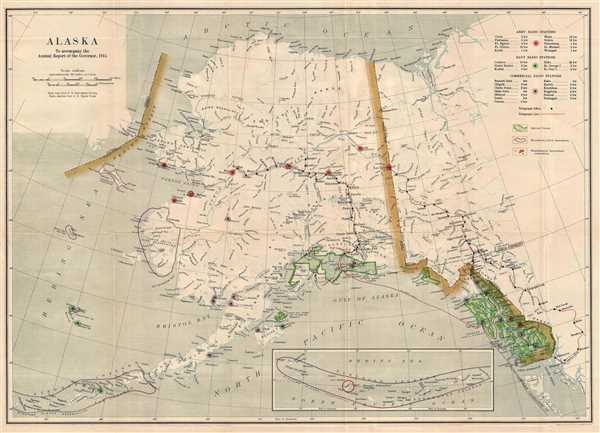 Depicts the location of communication technologies in Alaska - including radio stations and telegraph lines!
$250.00

This is a 1915 U.S. Geological Survey map of Alaska. The map depicts the territory of Alaska from the Bering Sea to the Yukon Territory and British Columbia in Canada and from the Arctic Ocean to the Gulf of Alaska and the Northern Pacific Ocean. Illustrating the state of communications in Alaska, army, navy, and commercial radio stations are noted. Army radio stations are circled in red, navy stations in green, and commercial stations in purple. Telegraph lines are depicted using red lines, one of which runs from Fort Simpson in British Columbia to Fort Egbert on the Alaskan border. Another, which is expressly labeled a military cable, runs under the Pacific to Sitka and from Sitka it goes in two directions: along the Alexander Archipelago to Ketchikan, Juneau, and Skagway, and under the Pacific to Cordova, Seward, and Valdez. From Valdez, the telegraph runs to the Nulato Wireless Station. Wireless stations along the telegraph lines are labeled, including Fairbanks. National forests are depicted using a heavy green border and diagonal lines, and bird reservations are noted by using thick purple lines, including the Yukon Delta Bird Reservation. The Aleutian Islands are depicted, from Unimak Island at the end of the Alaska Peninsula to Attu Island in the Near Islands. From Seguam Island to Attu, the Aleutians are illustrated in an inset map along the bottom border. All the Aleutian Islands had been designated as the Aleutian Islands Reservation. Numerous rivers are labeled, including the Yukon River and the Porcupine River. Mountain ranges and other physical features are also labeled, including Mt. McKinley. Elevations are provided as well. A key, explaining the different notations utilized on the map, is located in the upper-right corner.

This map was produced by the U.S. Geological Survey in 1915.