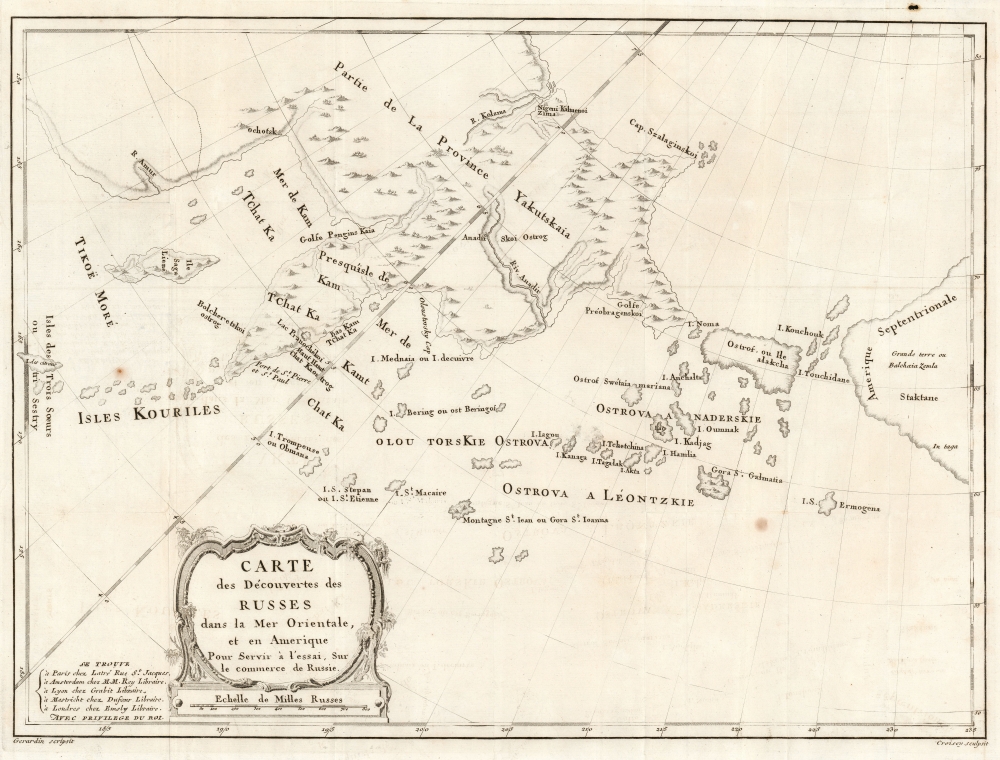 This is a rare and unusual 1777 map of the north Pacific in the vicinity of Alaska, the Bering Strait, and northeastern Siberia based upon Russian Promyshlenniki (trader) exploration. It appeared accompanying one of the earliest works on Russian commerce, the M. de Marbault's Essai sur le Commerce de Russie, avec l'Histoire de ses Decouvertes.

Marbault's precise sources are obscure, but he was in Russia while preparing his work serving as secretary to Durand, then minister of France in Russia, and thus may have had direct access to Russian geographical sources and traders. The map post-dates the Russian state-sponsored Great Northern Expedition of Vitus Bering (1733 - 1743) but pre-dates the English voyages of Captain James Cook, who definitively remapped the Pacific Northwest on his third and final voyage (1776 - 1779). Bering's Great Northern Expedition focused Russian attention on the potential resources and wealth of northeast Siberia and, presumably, the northwesternmost extremes of America.

With Bering's new knowledge of some of the Aleutian Islands and potential easy access to American shores from Siberia, Russian Promyshlenniki fur traders eager for new richer sources of sable, otter, and seal furs launched a series of commercial expeditions from the coast of Kamchatka. Their efforts resulted in a confused maps of the Aleutian Islands and the American coast based on a combination of unscientific mapping and flawed interpretations of Inuit cartographic knowledge. The most important of these was the secret expedition of Ivan Synd, whose (now lost) cartography caused Gerhard Muller to redraw his important map of 1758. The second state of Muller's map, issued in 1773, replaces his iconic peninsula with a series of islands - as reported by Synd, including the island of 'Alakcha' - marking some of the earliest usage of that term, an Aleut word meaning 'big island' or possibly 'mainland.'

This map was engraved by Jean-Baptiste Croisey to illustrate Marbault's, Essai sur le Commerce de Russie, avec l'Histoire de ses Decouvertes, issued in Amsterdam in 1777. The book is well represented in institutional collections. We see the separate map listed only twice in OCLC, by the University of British Columbia and the National Library of Scotland.