1890 Bacon Bird's-Eye View of the Battle of Alexandria, Egypt 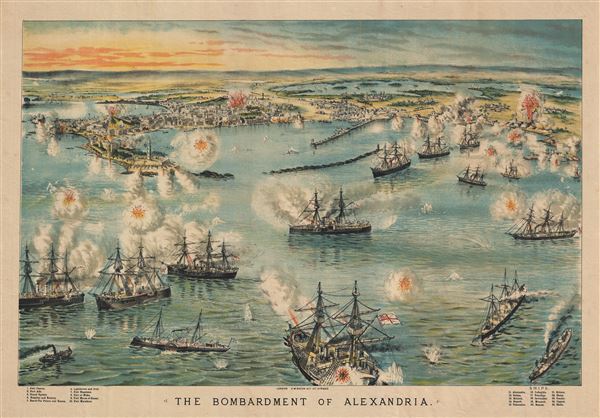 1890 Bacon Bird's-Eye View of the Battle of Alexandria, Egypt

This is an uncommon c. 1890 birds-eye view of the bombardment of Alexandria, drawn by G. W. Bacon. The view beautifully depicts the bombardment of the city of Alexandria, Egypt by the British Mediterranean Fleet during the Anglo-Egyptian War of 1882. The fifteen Royal Navy ships under the command of Admiral Sir Frederick Beauchamp Seymour can be seen in the forefront with cannons firing and flags flying from the masts. In the background, we can see the recognizable city of Alexandria under fire. In the bottom margin, Alexandrian forts and important buildings are listed on the left, with numbers indicating their location in the view, while the list on the right lists the fifteen ironclad ships of the Royal Navy.

The bombardments of Alexandria took place between 11 – 13 July, 1882 following the revolt of Ahmed Urabi and his supporters against European domination of Egypt. The bombardment lasted 10 hours and resulted in heavy losses to the Egyptian forces. The British fleet suffered minimal damage. Fires broke out across the city and destroyed most of Alexandria.

This chromolithograph view of the event was issued by G. W. Bacon and Company, 127, Strand, London.

George Washington Bacon (1830 - 1922) was a London based book and map publisher active in the mid to late 19th century. Bacon's firm G.W. Bacon and Co. purchased the plates created by Edward Weller for the Weekly Dispatch Atlas then modified and updated them for several of their own important atlases, including The New Ordnance Atlas of the British Isles. In 1893, Bacon & Co. acquired the map publishing business of J. Wyld. Then, around the turn of the century, Bacon & Co. itself was folded into the Scottish publishing house of W.& A.K. Johnston.