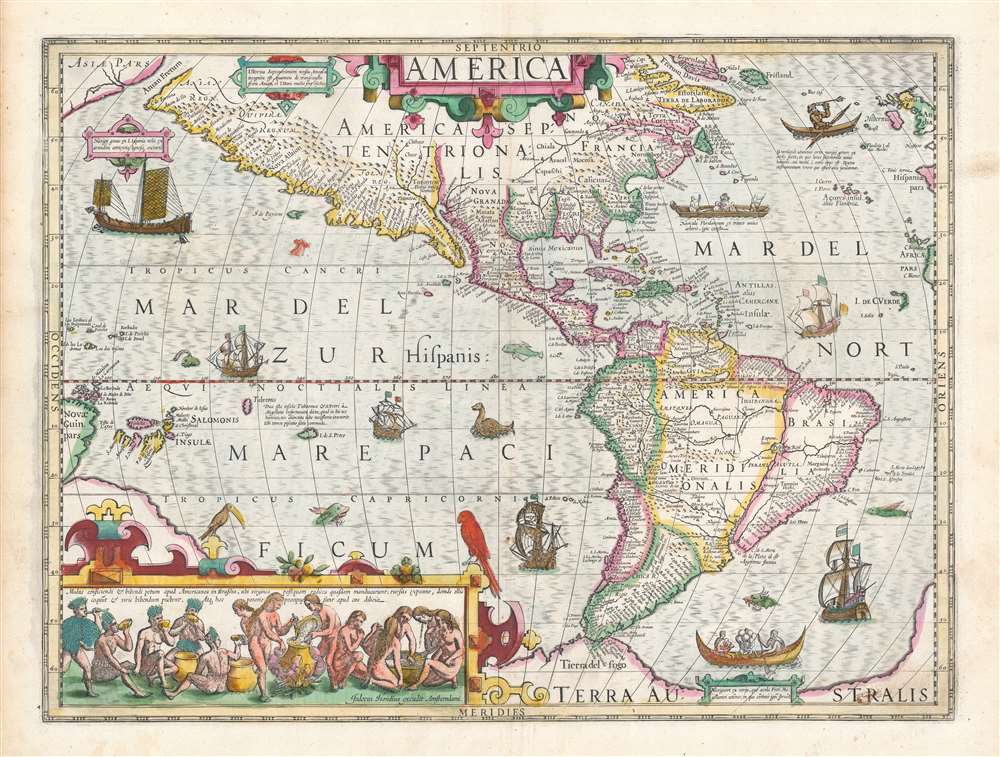 This is a superb, original-color example of Jodocus Hondius' 1606 map of America. Presented on a stereographic projection centered on the Americas, the map extends west to include the Pacific as far as New Guinea, and east to include the Atlantic as far as the British Isles, western Spain, and western Africa. It further extends from Greenland to the speculative continent of Terra Australis just south of the Straits of Magellan.

Discoveries and Speculation in North America

North America is typically distorted with a large eastward bulge in the vicinity of Virginia and the Carolinas associated with multiple erroneous calculations of longitude at sea. Sir Walter Raleigh's colony at Croatoan on the Outer Banks is noted, as is the Chesapeake Bay (Chesepiook). Newfoundland follows the Petrus Plancius model but otherwise the northeast is typical of other period maps. In what is today Maine, the apocryphal American Indian city of Norumbega is noted, probably in the vicinity of Penobscot. There appears, as yet, no trace of the Great Lakes, but a note to the left of the title suggests an association of the Strait of Anian (itself an anomaly) with Davis Strait – expressing the enduring hope for a northwest passage. Along the west coast evidence of Drake's voyage appears in the naming of Nova Albion, the part of the American coast Drake claimed for England.

South America exhibits considerable advancement over Ortelius and Mercator's depictions, including a longitude correction over earlier maps of nearly 10%. Hondius identifies the lakes Parima and Eupana, as discussed below, and attempts to map the complexity of the Amazon River system. Despite postdating Drake's circumnavigation, and the evidence acquired thereby that Tierra del Fuego was in fact insular, the southernmost tip of South America is mapped as part of Terre Australis, the mythical southern continent postulated by early cosmographers.

The legend of Parima is associated with the English adventurer Sir Walter Raleigh's search for El Dorado. Believing El Dorado to lie in the northern part of the Amazon, Raleigh sailed down the Orinoco River just before the onset of the rainy season. Reaching a remote tribal village, Raleigh noted canoes arriving bearing gold, silver, and other treasures. Asked where the gold came from, the natives replied, 'Manoa', the term for the tribe to which the river traders belonged. Manoa, the natives claimed, could be reached following a long river voyage southward to a Great Lake, called Parima. Raleigh and his associates immediately associated Manoa and Lake Parima with the golden kingdom of El Dorado, though they never visited the city or lake. Subsequent maps, including this one, mapped El Dorado and Lake Parima in this location for several hundred years. Both Raleigh and the natives were describing an actual event known to occur annually in the region. Rains would annually swell the Amazon and Orinoco river systems creating a linkage in the Rupununu flood plain, which, during heavy rains, can resemble a massive lake. The Manoa were a large and populous trading nation active in pre-colonial days whose vast empire, based in the Amazon Basin, extended form the Andes to the Orinoco. Sadly, the Manoa and many of the other populous South American indigenous nations noted by the earliest explores to the region vanished, brought low by European epidemics.

Another mythical lake, Eupana, appears further south connecting the Rio de la Plata and the Paraguay River to the Amazon River and the R. Real, thus turning eastern Brazil into an island. Eupana is another term for the Laguna de Xarayes as the source of the Paraguay River. The Xarayes, a corruption of 'Xaraies' meaning 'Masters of the River,' were an indigenous people occupying what are today parts of Brazil's Matte Grosso and the Pantanal. When Spanish and Portuguese explorers first navigated up the Paraguay River, as always in search of El Dorado, they encountered the vast Pantanal flood plain at the height of its annual inundation. Understandably misinterpreting the flood plain as a gigantic inland sea, they named it after the local inhabitants, the Xaraies. The Laguna de los Xarayes almost immediately began to appear on early maps of the region and, at the same time, almost immediately took on a legendary aspect. Later missionaries and chroniclers, particularly Díaz de Guzman, imagined an island in this lake and curiously identified it as an 'Island of Paradise,'

In addition to its cartographic significance, this map is much admired for its extensive decorations and illustrative scenes, including sailing ships, fishermen, sea monsters, indigenous peoples, and more. These are generally drawn from the early volumes of Theodore de Bry's Grand Voyages. Of particular note in the scene in the lower left of Native Americans preparing an intoxicating drink made from manioc roots. This scene is from de Bry's publication of Hans Staden's harrowing captivity among the Tupinambá peoples of Brazil.

This map was engraved for the first, 1606 Hondius edition of the Gerardi Mercatoris Atlas sive Cosmographicae. This ambitious atlas - the first work to use that term - was initiated by Mercator, but not completed until after his death by his sons and Hondius. This example corresponds typographically to the 1628 French-text edition of the atlas. Both the atlas and separate issues of the map are well represented in institutional collections. Examples of this quality have grown scarce.

Hondius, J. / Hondius, H., Atlas, editio decima, (Amsterdam) 1628.     Mercator's Atlas is one of the most important works in the history of cartography. Although in fact Ortelius was the first to publish a proper atlas, the Teatrum Orbis Terrarum, Mercator's Atlas the first book to employ the term Atlas for a collection of maps. The term is derived both from the mythical titan, Atlas, who was forced to bear the world upon his shoulders, and the Libyan king, philosopher, and astronomer of the same name that, so the legend goes, constructed the first globe. Mercator dedicated the final 25 years of his life to compile the Atlas. He published two parts during his lifetime in 1585 and 1589, but the final part published posthumously by his son Rumold Mercator, in 1595. The map plates for the Atlas were later acquired by Jodocus Hondius who published the most complete and well known edition in 1606. It was Jodocus who popularized the Atlas and who did the most to elevate Gerard Mercator's work.