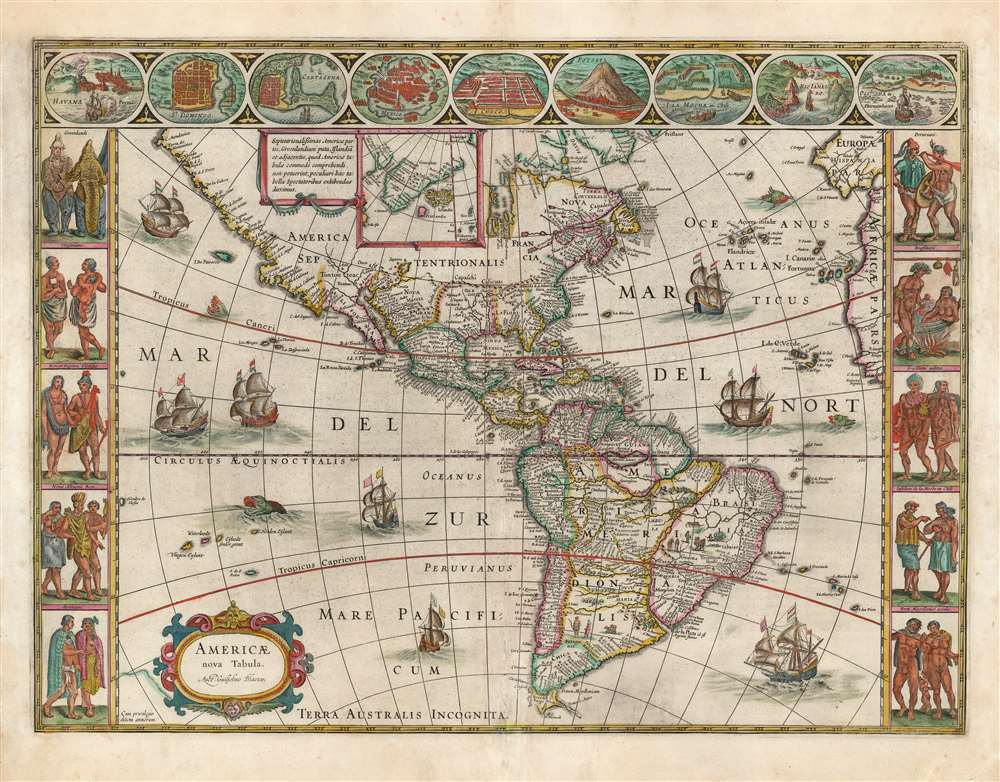 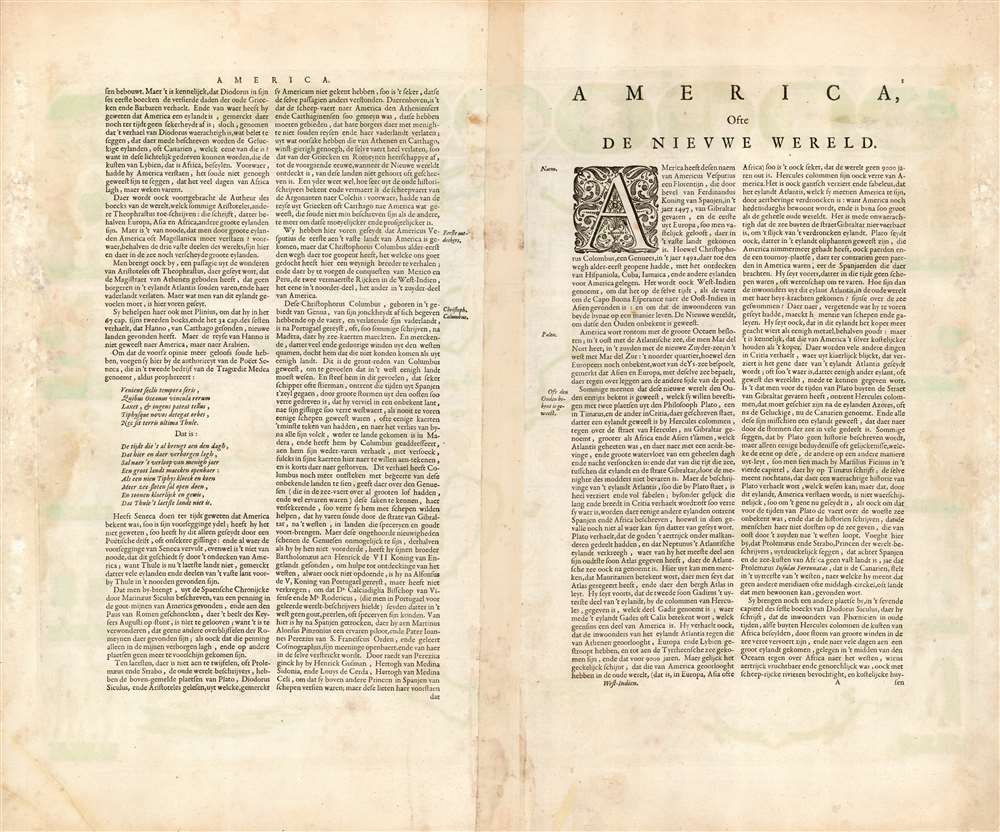 Iconic Map of America of the Dutch Golden Age of Cartography.

The essential Dutch map of America: Willem Janszoon Blaeu's 1635 carte-á-figures map of the Western Hemisphere. This is among the most desirable printed maps, encapsulating in one piece the most sought-after aesthetic qualities of the Dutch Golden Age of Cartography. In particular, it is the prime example of the carte-á-figures, or 'figured map,' displaying in its upper border the most important cities in the mapped region, and in its left and right borders finely-engraved depictions of the peoples native to it. The cities thus depicted are (from left) Havana, Santo Domingo, Cartagena, Mexico, Cusco, Potosi, La Mocha, Rio de Janeiro, and Olinda. The denizens of the Americas here depicted include Greenlanders, Virginians, Floridians, Californians (Specifically, the King and Queen of Nova Albion) Mexicans, Peruvians, Brazilians, Chileans, and the natives of Magellanica (these last, possibly intended to be the giants reported by the survivors of Magellan's voyage). The decorative elements of the map are not limited to the borders: the seas are sailed by no fewer than eight ships sporting Dutch flags, and four sea monsters prowl the oceans.

Apart from his world map, this is the only Blaeu folio map to show all of North America; consequently, it had a long printing life. When Willem Blaeu first produced the map in 1617, it not only bore the mapmaker's proper name - Guiljel: Janssonio - but also showed fewer islands in the Pacific, and presented a more primitive depiction of the Strait of Magellan. The present map improves on these areas to reflect the findings of Le Maire and Schouten's 1615-1617 circumnavigation, news of which Blaeu was aware but was prevented, by the Dutch East India Company's censorship, from printing in 1617. (Blaeu's protest that his competitors were already printing the new data led the Company to relent, and he printed the corrected version of his map in 1618.) From that point forward, the plate remained in use with minor changes, none of which represent changes in geographical knowledge.

Scope and Features of the Map

The engraving covers all of North and South America and the surrounding seas, extending eastward to Europe and Africa, and westward to the unexplored central Pacific. At the southernmost point of South America, Tierra del Fuego is shown as an island separate from the hypothetical Terra Australis Incognita, including both the Strait of Magellan and the Strait of Le Maire. The northernmost regions shown in the main map are Hudson's Bay, the coasts around the Davis Strait and part of the imaginary island of Frisland. An inset map shows the coastline of Greenland in more completeness, a complete rendering of the imaginary Frisland and an accurate depiction of Iceland. The mapping of North America reveals little knowledge beyond the coastline: The Saint Lawrence River appears to take its beginning in an array of small lakes, but no recognizable Great Lakes are shown. The Mississippi does not yet appear, although there are several rivers emptying into the Gulf of Mexico; their watershed bounded by imaginary mountain ranges. In the North American southwest a proto-Colorado River appears with its start in a lake surrounded by the legendary Seven Cities of Gold. The Pacific Coast shows no sign of an insular California (that canard would not appear until 1624, and Blaeu's map was never updated to include it).

The east coast of North America includes a rudimentary depiction of the 1591 John White cartography, appearing as an outsized and protuberant Virginia and Outer Banks. The Canadian Maritimes appear recognizably, but between Virginia and Nova Scotia the geography becomes imaginary. The highlight of this region is the appearance of Norembega, a kind of northeastern El Dorado (El Dorado itself appears in South America).

Norembega or Nurembega appears in what is today New England. This mysterious land began being mapped with Verrazano's 1529 manuscript chart of America. He used the term, Oranbega, which in Algonquin means something on the order of 'lull in the river'. References to this place, spelled on variations of Nurumbeg, Norumbega and so on, begin to appear in 1542 journals of respected French navigator Jean Fonteneau dit Alfonse de Saintonge, who claimed to find the place in the vicinity of modern-day Bangor, Maine:

Blaeu, W. / Blaeu, J., Niewe Atlas, (Amsterdam: Blaeu) Dutch Edition, 1650.     The classic Dutch atlas, whose publication ushered in the Dutch golden age of cartography. Willem Jansz Blaeu had been, since 1604, producing engraved maps for sale; these were separate issues (and all consequently extremely rare) until the publishing of Blaeu's Appendix in 1630 and 1631, which also included a number of maps purchased from the widow of Jodocus Hondius, (for example his famous iteration of John Smith's map of Virginia.) In 1634, he announced his intention to produce a new world atlas in two volumes, entitled Theatrum Orbis Terrarum, sive Atlas Novus (in an effort to invoke the successful work of the same title produced by Ortelius the previous century, while reinforcing the notion of it being a new work.) This work was published first in German in 1634, followed by Latin, Dutch and French editions in 1635. Blaeu's maps have always been noted for the quality of their paper, engraving and fine coloring, and this was the intent from the very start. The 1634 announcement of the upcoming work described it: 'All editions on very fine paper, completely renewed with newly engraved copperplates and new, comprehensive descriptions.' (van der Krogt, p,43) Many of the most beautiful and desirable maps available to the modern collector were printed and bound in Blaeu's atlases. Willem's son, Joan, would go on to add further volumes to the Atlas Novus, concurrently printing new editions of the first two volumes with additional maps, in effect making these new editions an entirely new book. Under Joan there would be nine Latin editions, twelve French, at least seven Dutch, and two German. This exceedingly successful work would be the mainstay of the Blaeu firm until 1661, at which point the work was supplanted by Joan Blaeu's masterwork Atlas Maior in 1662.

Excellent. Some minor printers' creases and wrinkles at bottom centerfold, else a fine example with superb original color.