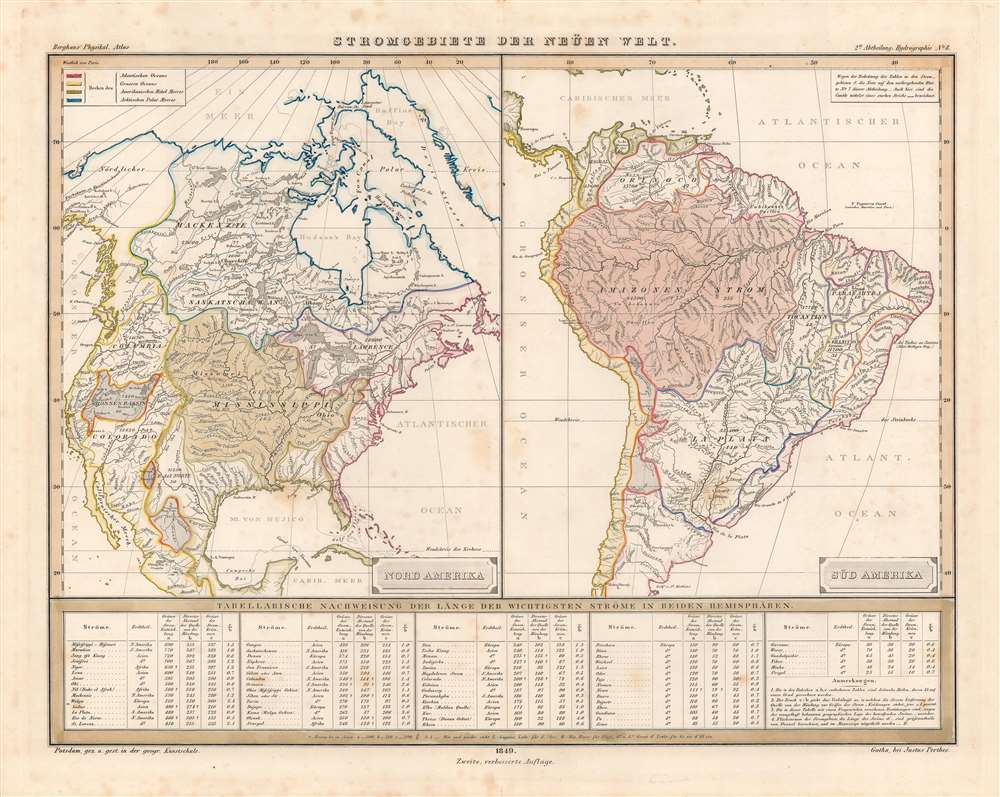 America's waterways from the era of peak canal building.
$200.00

This is an attractive hand-colored 1849 map of the major river basins in North and South America made for Berghaus' Physikalischer Atlas, a landmark achievement in German cartography, published by Justus Perthes. As with the atlas as a whole, it shows great attention to detail and the concise presentation of scientific data.

A note at top-right points out that, as with the previous map in the series on Hydrography ('Asia-Europa; in Beziehung auf das Fliessende, und seine Vertheilung in Stromgebiete'), canals are marked by a thick black line. This map dates from the 'golden age' of canal building in the United States, after the success of the Erie Canal (opened 1825) but before railroads became a widespread, faster alternative (even though many railroads were initially built to supplement rather than replace canals). Several canal systems of the northeastern United States are indicated, including the Ohio Canal, Erie Canal (here as 'Gr. Canal,' presumably Große), the Connecticut Canal (also known as the Farmington Canal, the New Haven and Northampton Canal, and the Hampshire and Hampden Canal), and the Champlain Canal, indicated by a line but not named. Some of the canal lines shown here are fictious, such as a cluster near the Florida Panhandle, likely the result of limited or inaccurate information reaching Berghaus.

At top-left, a legend denotes colors used to show which rivers flow into which oceans and seas. A table at bottom lists the lengths of the world's major rivers. The numbers written within the various river basin areas on the map are most likely the area of those river basins, in German miles. It is worth pointing out that German miles were more than four times longer than English miles (24,000 German feet versus 5,000 English feet).

This map was included in the 2nd Division (Abtheilung), No. 8 'Hydrology' of Berghaus' Physikalischer Atlas, published by Justus Perthes. It was drawn at the Geographische Kunstschule in Potsdam (which Berghaus had founded) and published in Gotha. Berghaus' Physikalischer Atlas was initially published as an addendum to Alexander von Humboldt's extremely popular and influential book Kosmos, which incidentally was strongly influenced by his travels in the Americas. With the publicity attracted by its association with Humboldt, Berghaus' atlas quickly became well-known and regarded as a triumph in its thorough research, coverage of a wide range of subjects, and clever methods for presenting data. This map is only cataloged as belonging to the holdings of a small handful of libraries in Germany and it is scarce to the market.


Heinrich Karl Wilhelm Berghaus (May 3, 1797 – February 17, 1884) was a German (Prussian) geographer who founded the Geographische Kunstschule in Potsdam and trained several important German geographers and cartographers of the late 19th century, including August Heinrich Petermann and his nephew Hermann Berghaus. The elder Berghaus also was a friend and associate of Alexander von Humboldt, producing some of the maps in his publications. Berghaus was best known for his own influential and wide-ranging atlases, namely Atlas von Asien, published between 1833 and 1837, and Berghaus' Physikalischer Atlas, published in multiple editions in the 1830s-1840s. Although Atlas von Asien was a commercial failure, it was regarded as a work of supreme quality, boosting the reputation of the publisher Justus Perthes and setting up their next collaboration, Berghaus' Physikalischer Atlas, for success. Learn More...

Good. Some foxing, especially in margins.