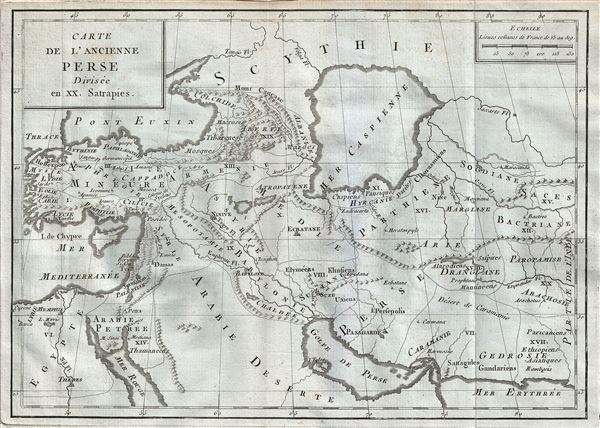 This is a rare 1782 map of ancient Persia by Jean- Baptiste-Claude Delisle de Sales. The map covers the lands of the First Persian Empire as divided into 20 Satrapies or provinces from Turkey and the Mediterranean Sea, east as far as modern day Afghanistan. Includes the Black Sea, the Persian Gulf, the Red Sea and a rather bulbous Caspian Sea. The map notes several rivers, lakes, cities and towns, as well as topographical features, with mountains rendered in profile.

Founded by Cyrus the Great in the 6th century BCE, the First Persian Empire or the Achaemenid Empire was, at its height, the biggest Empire in the world. Cyrus appointed twenty Satraps or provincial administrators, identified in this map. These Satraps ruled in the name of the king, thus making it possible to rule over the entire territory.