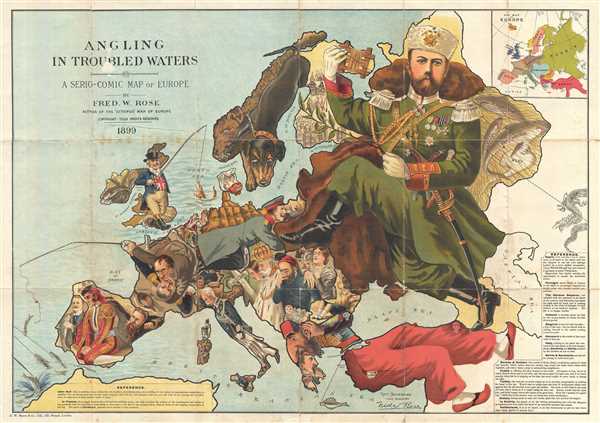 One of Fred Rose's most iconic Serio-Comic caricature maps.

One of Frederick W. Rose's most iconic caricature or satirical maps, this is the 1899 Angling in Troubled Waters. The map presupposes that the reader will recognize the familiar shape of Europe and its constituent nations, which have here been replaced by caricatures, each of which tell their own political story. In Angling in Troubled Waters Rose uses an effective 'fishing' metaphor to illustrate conflicts associated with Europe's crumbling global colonial hegemony as well as inter-European political tensions.

The map is rich in detail and there is far more going on than can be easily addressed here, but here is a recap of the major issues presented:

This chromolithograph serip-comic map as drawn by Matt Hewerdine after designs by Fred W. Rose. It is one of Rose's most iconic maps and is highly sought after by collectors.

Good. Like most examples of this map there is considerable wear and splitting on the original fold lines - see zoom feature. The whole has been backed with archival tissue. Accompanied by original binder, which is worn at edges and repaired along fold. Some loss and damage over title.