1854 Perrot and Oudart Chart or Map of Animals, Birds, Fish, and Trees 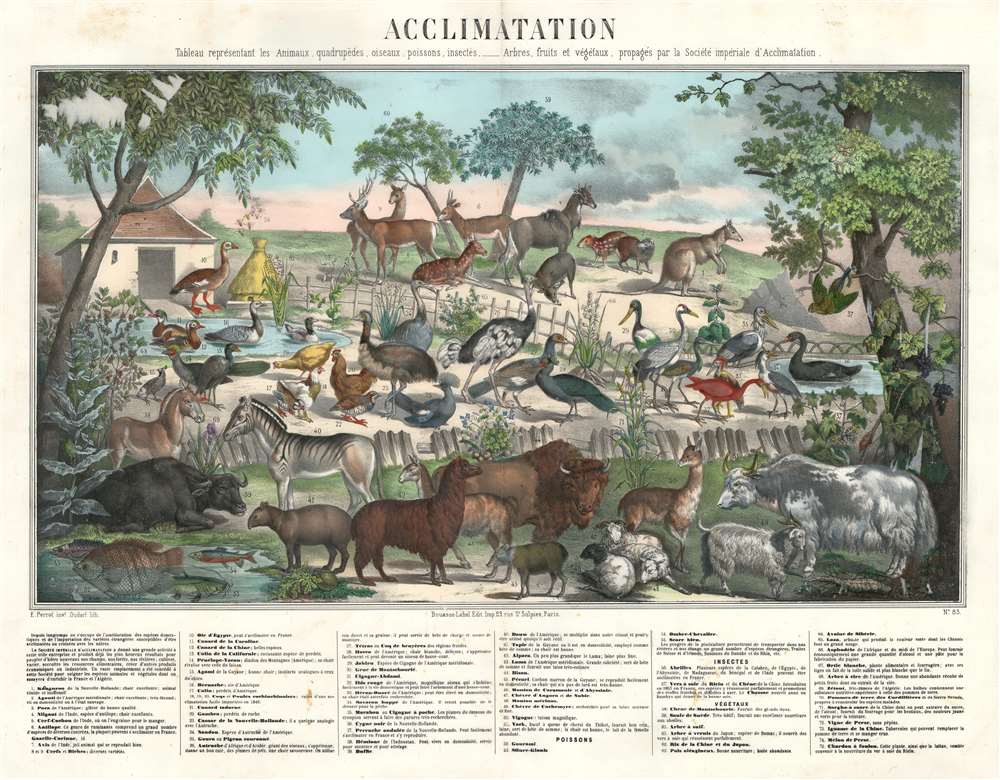 1854 Perrot and Oudart Chart or Map of Animals, Birds, Fish, and Trees

Illustrates the species of animals, birds, fish, and plants that a French committee could be successfully brought to France from across the world.

This is a rare c. 1854 Aristide Michel Perrot and Oudart map or chart of animals, birds, fish, and trees that the French Société Impériale d'Acclimatation believed could be successfully brought to France from across the world. Seventy-five different species of animals and plants are intermixed and illustrated in brilliant gum arabic color. Some of the animals represented, such as the yak (which is described here as a cow with a horse's tail from Tibet), llama, Merino sheep, and Angora goat had already been domesticated and, in the case of the yak, used as a draft animal. The quagga, a now extinct type of zebra, is illustrated on the left next to the onager, or hemione, a species of wild ass native to Asia. With regard to the birds, the cassowary, ostrich, and rhea are among the more exotic illustrated, while the Indochinese chickens and mallard duck are perhaps the most familiar. A mandarin duck is illustrated sitting on the pond, which our New York City clients will be familiar with after one became a minor celebrity in the city after one appeared in Central Park last year and caused a minor stir among the city's residents. A kangaroo, bison, and water buffalo are also among the species presented.

This view features extensive use of Gum Arabic.  Most watercolor paints produced from the mid-19th century onward have a gum arabic component which acts a binding agent to hold the pigment in suspension.   Some watercolorists, when mixing their own paints, will add additional gum arabic to the paint, leading to strikingly vibrant, glossy, and depending on the mixture, even transparent and opaque colors.  This technique is also sometimes referred to as gouache or bodycolor.

This map was created by Aristide Michel Perrot, engraved by Oudart, and published by Bouasse-Lebel c. 1854. This is the only known example.

Aristide Michel Perrot (1793 - 1879) was a French geographer, cartographer, and essayist active during the 19th century. Perrot specialized in miniature maps that appear in numerous French atlases. Perrot was also a prolific writer and his works include geographic lexicons and several essays.

Very good. Light wear along original centerfold. Blank on verso.
Looking for a high-resolution scan of this?