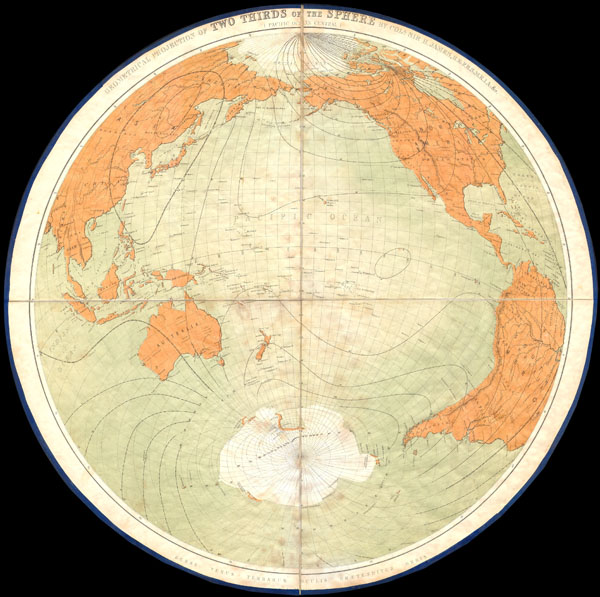 This is a scarce and unusual hand colored map is an projection of to thirds of the earth centered on the pacific ocean and the polar Antarctic regions. Dates roughly to 1860. Antarctica itself is indication but not shown as it had yet to be fully defined as a landmass. Printed in a highly unorthodox circular style and divided into four linen mounted sheets. Prepared by Colonel Sir Henry James. A rare and peculiar piece.

Major General Sir Henry James (1803 - 1877) was the director-general of the Ordnance Survey, the mapping agency of the British government, from 1854 to 1875. He studied at the Royal Military Academy and was commissioned as a second lieutenant in the Royal Engineers on September 22, 1826. He joined the Ordnance Survey in 1827 and spent the majority of his career there, except for a brief stint at the Admiralty. He became Superintendent of the Ordnance Survey in 1854. Upon taking over the Ordnance Survey, he became involved in the 'battle of the scales'. It had long been debated which maps should be made and what scale would be the most useful. Sir Henry was a firm believer in the 1 : 2500 scale, and, due to his position, imposed this belief upon the Survey despite the less than full approval of his superiors. Sir Henry created a photography department at the Ordnance Survey in 1855 as a means of reducing the scale of maps. He claimed to have invented photozincography, a photographic method of producing printing plates. However, the process had in fact been developed by two members of his staff. Nonetheless, James was the driving force behind using the process to create and publish a facsimile of the Domesday Book in the 1860s. He also used this photozincographic process to preserve historic manuscripts. Learn More...

Good condition with patchy discoloration here and there – particularly along the lower central split. Spit into four sheets mounted on linen. Folds neatly into a pie shaped wedge.
Looking for a high-resolution scan of this?