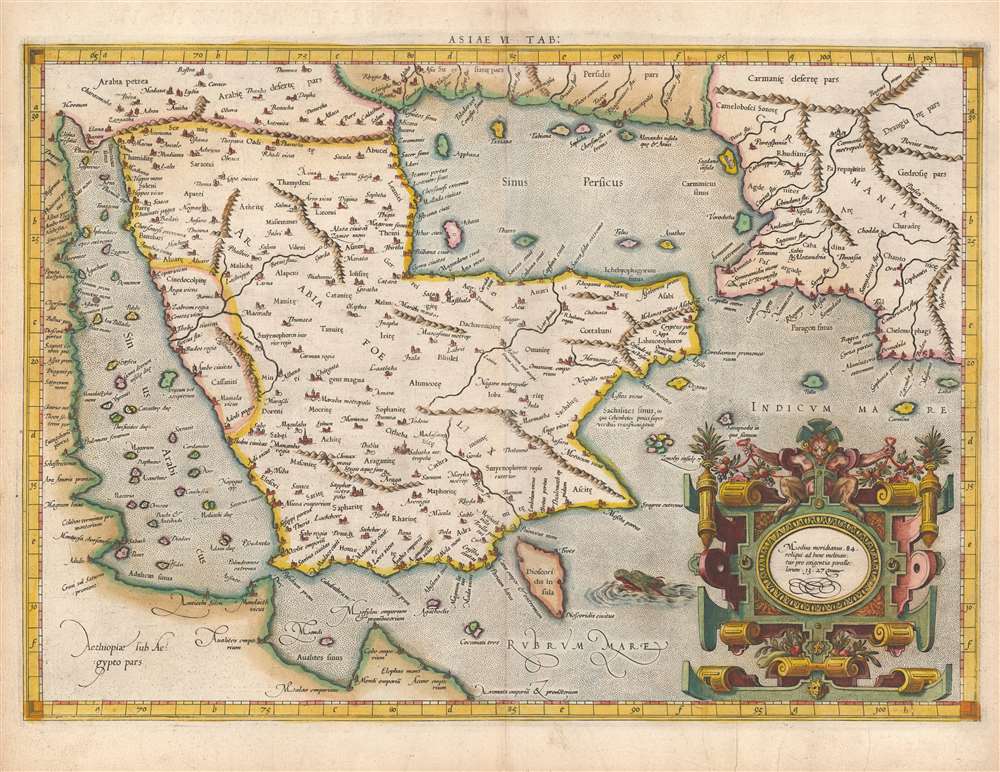 This is Gerard Mercator's map of the Arabian Peninsula, based on the second-century mapping of Claudius Ptolemy (c. 100 - 170), the progenitor of modern geography. Mercator - both an authoritative geographer and a gifted engraver - executed this map for his 1578 Duisberg edition of Ptolemy's Geographia, intended to be the definitive edition of that foundational work.

Previous editions, both copperplate and woodcut, had been comparatively crude renditions that often omitted detail and were prone to ambiguities. Mercator, produced his versions of Ptolemy's maps using the latest engraving techniques, surpassed any that came before. 'This map is much more finely engraved and more accurately fitted to the tables, than any of the maps of the previous Ptolemy editions.' (Tibbetts, Arabia) Mercator's maps were more beautifully presented than any earlier Ptolemy, but his own innovations in the use of italic fonts allowed for the legible inclusion of more detail than prior iterations. (Mercator had in 1540 produced the first instructional handbook on the use of italics to appear outside Italy, and Mercator was the first engraver to use the typeface on a map.) Mercator had also edited and re-drafted the maps, consulting many printed and manuscript editions of Geographia in order to present as clear a rendition of Ptolemy's original design as possible. On the other hand, Mercator presented Ptolemy's maps on modern projections, dispensing with the crude trapezoidal projections employed in most earlier editions.

The map's detail derives from the knowledge available in Alexandria in the second century, thus the place names change dramatically. The map does mention several places in present-day Qatar (Abucei, Leaniti, Themi, Asateni, and Aegei). Names added to this edition of the map include Mesmites Sinus, Idicar, and Iuicara, located in present-day Kuwait. The island of 'Ichara' appears: this is now understood to be the island of Kharj. The peninsula 'Chersonesi Extrema,' is believed to correspond to Ra's Rakan in present-day Qatar. Other notes point out details such as famous shrines, and Ichtyophagorium Sinus (the strait of the fish-eaters).

The Importance of Ancient Geography

European exploration in the late fifteenth and early sixteenth century had resulted in a massive expansion to their known world, far superseding Ptolemy's second-century geographical knowledge. And yet, mapmakers continued to publish editions of Ptolemy - often simultaneously with modern maps reflecting the new discoveries. The reason for this was that despite his antiquated data, Ptolemy's methodology remained essential and authoritative. By employing his great innovation - laying out a grid, and assigning to real-world locations coordinates - one could produce a mathematical representation of the world showing clearly the distances between known features. Every geographer of the Age of Discovery embraced Ptolemy's methodologies to absorb new discoveries. Any geographer, before developing new work, needed to understand the Ptolemaic foundations of their discipline and as a consequence, editions of Ptolemy would continue to be printed well into the eighteenth century.

Mercator produced the first edition of his Ptolemy in Duisberg in 1578, as well as a second edition printed in Cologne from the same plates in 1584. The plates later passed to Jodocus Hondius, his successor, who issued editions in the early 17th century. In 1694, the plates were sold at auction to François Halma (1653 - 1722) who reworked them and published editions in 1695, 1698, and 1704. A final edition, from which this map came, was published in 1730 by R. and J. Wetstein and G. Smith. Some twenty examples of the 1584 Ptolemy are cataloged in institutional collections. The separate map appears in several institutions in its 1578 edition, but only the Biblioteca Nacional de España shows a copy of this map in the 1584 edition.