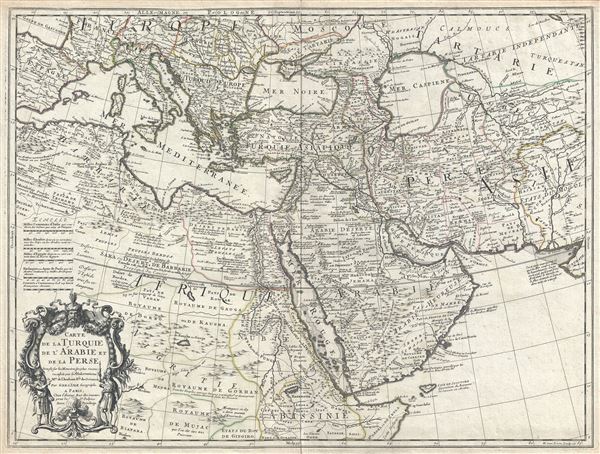 The first edition of the first modern map of Arabia and the foundation of most subsequent maps of Arabia until the mid-18th century.

A scarce first edition first state example of Guillaume De L'Isle's 1701 map of Arabia, Turkey, and Persia. This is a foundational map and may be considered the first modern map of the Arabian Peninsula, in which the vagaries of the Ptolemaic era were at last exchanged for a more sophisticated modern geography based on actual observation and scientific deduction. Centered on the Arabia, this map covers the entire Mediterranean Basin from Spain to Cyprus, and extends eastward into Asia as far as modern day Afghanistan and the Indus River Valley. It further extends from the Black and Caspian Seas south to the Horn of Africa and Abyssinia.

This map is exceptionally dense with a wealth of new and reconsidered information throughout. Its most significant advances appear in the Arabian Peninsula, for which this may be considered a foundational map. Previous maps of Arabia relied heavily on Ptolemaic influences dating to the 15th century. The present map, aided by a wealth of new cartographic data then flowing into Europe, particular Paris, is among the first to scientifically assess and reconsider the region. Delisle based most of his cartographic advances on first hand reports from diplomats, missionaries, and explorers, as well as on earlier Ottoman and Arabic maps in the French archives. Delisle has here refined most borders, removed double place names (a common error in earlier maps), reengineered various mountain ranges, and deleted questionable data. The Sheikdom of Bahrain, or 'Kingdom of Pearls' in reference to the region's rich pearl fisheries, is noted as occupying most of the Arabian portion of the Persian Gulf. This is the first map of Arabia in which rivers originating in mountains peter out before reaching the sea - one such example is the Sancon River not far south of Mecca. Another item of interest is the Aftan River. Though no river has flowed here for thousands of years, this river has recently been identified as an ancient trade route along the Wadi al-Sahba giving access to the Arabian interior. Delisle's map stood as the standard map of Arabia, being copied by numerous subsequent cartographers including, but not limited to, Chatelain, Covens and Mortier, and others, until the revolutionary work of D'Anville in 1752.

The Persia portion of this map also has much of interest and occupies nearly the entire northeastern quadrant. The Caspian Sea (Mer Caspiene) is particularly malformed but offers a minor update over the Sanson model. Here the Caspian Sea is slowly beginning to take on a north-south orientation, with the western shores being particularly well defined. The eastern shoreline remains vague and features a note by Delisle admitting that 'ces Costes no sont bas bien conniies' (these coasts are not well known). He offers excellent coverage of the central Asian portions of the Silk Route, drawing on Russian sources for mapping the centers of Samarkand, Bokhara and Fergana, known stopping points for Russian trade envoys to China.  For the remainder of Persia, Delisle most likely updated archaic Persian and Arabic cartographic information with reports from Georgian and Armenian traders and mercenaries active throughout Persia.  It may be through these sources that Delisle was able to add considerable geographic information regarding trade routes and place names in central Persia.  These include such significant advances as the identification of Tehran (Taheran), the current capital of Iran, which is notably absent it earlier European maps of Persia.

The lower left quadrants of this map are dedicated to a rather interesting depiction of northeastern Africa from the Mediterranean shores to the Horn. To construct this part of the map Delisle accessed explorer and missionary reports as well as and hearsay that filtered up the Nile Valley from Christian enclaves in Abyssinia. He correctly asses the course of the Blue Nile placing its source at Lake Tana, (here Dambea) in modern day Ethiopia. However, he misaligns the lake, placing the regional capital Gondar (Gontar) to its east rather than north. The Ruins of Axum are identified just to the north of Gondar. Delisle offers a speculative course of the White Nile that postulates a confluence with the Niger - a popular theory of the period. A great lake, identified as 'Kaugha ou Gaoga' is most likely an early mapping of Lake Chad.

The map is rendered in Delisle's distinctive and innovative style which eschewed the flamboyant Dutch strapwork of the previous century in favor the highly detailed, information rich, and decorative cartographic approach seen here. There are at least five different editions of this map as well as numerous variants. The present example represents the first and earliest, engraved by H. van Loon and published in 1701. We are able to identify this as such because of the use of Rue des Canettes as Delisle's address, in 1702 he moved to Quai de Horlage. Also of note is the inscription 'C. Simonneau inv. Et fecit' just below the title cartouche. Simmonneau is responsible only for the decorative cartouche and his imprint was removed from all subsequent variants and editions.

Tibbetts, G. R., Arabia in Early Maps: A Bibliography of Maps Covering the Peninsula of Arabia, Printed in Western Europe from the Invention of Printing to the Year 1751, #171. Rumsey 4764.075.
Looking for a high-resolution scan of this?