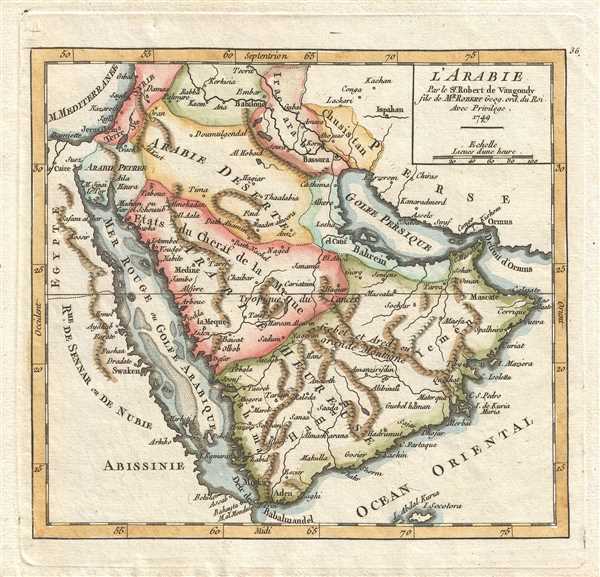 This is a hand colored 1749 Didier Robert de Vaugondy map of the Middle East. The map depicts the region from the Mediterranean and Egypt to Persia (Iran) and from Syria and Iraq to the Indian Ocean and northern Ethiopia (Abissinie), including the Arabian Peninsula. The Holy Land is labeled, and locates both Nazareth and Jerusalem. The Arabian Peninsual is divided into several different regions, although there are two dominant labels 'Arabie Deserte' or 'Desert Arabia' and 'Arabie Heureuse' or 'Happy Arabia.' 'Happy Arabia' is divided between the States of the Sharif of Mecca (Etats du Cherif de la Meque) and Yemen. The Etats du Cherif de la Meque includes both Mecca (la Meque) and Medina (Medine), both of which are labeled. The cities of Aden, in Yemen, Cairo (le Caire), Damascus, Babylon, Tikrit, Basra, and Ispahan are labeled, along with several smaller towns. Bahrain (Bahrein) is depicted along the Persian Gulf, and the highly strategic Strait of Hormuz is labeled. Across the Red Sea, the African coast is depicted, including Egypt, the Kingdom of Sennar or Nubia, which was in modern-day Sudan, and Abyssinia, which is depicted as being in Ethiopia and Somalia. Mountain ranges are illustrated in profile and several rivers snake across the map.