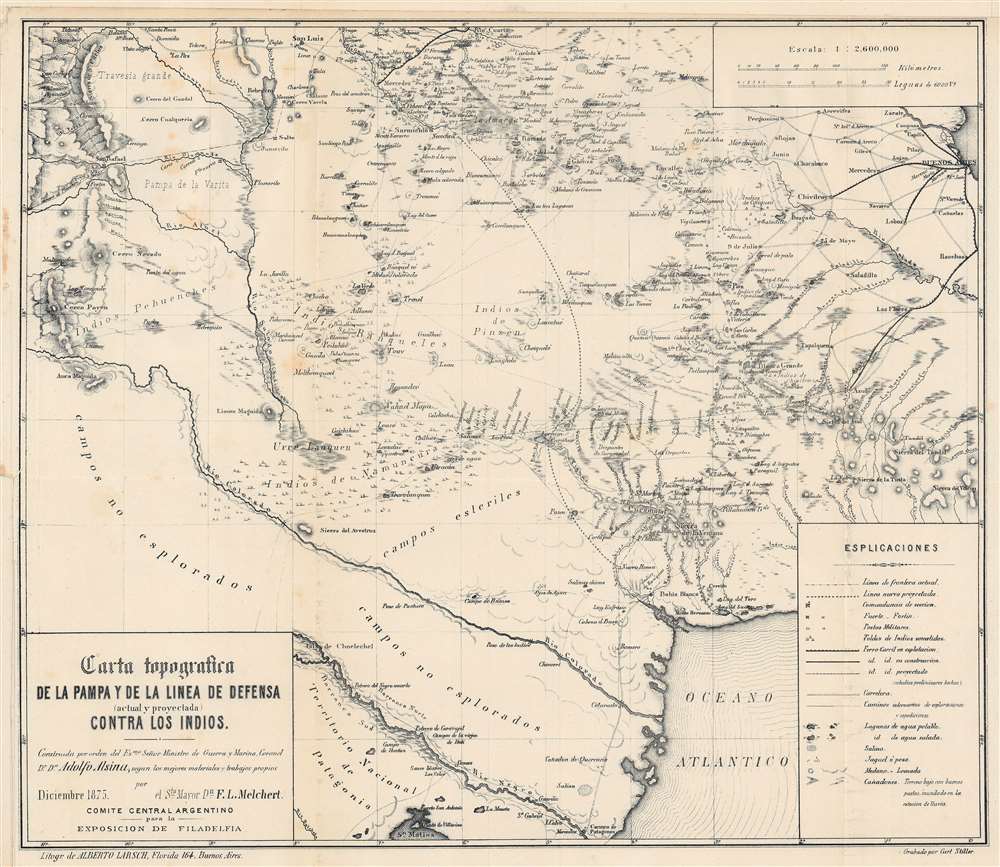 Argentina's subjugation of the frontier.
$375.00

Produced to introduce Argentina to a global audience at the 1876 Philadelphia Centennial Exposition, this map by military engineer F.L. Melchert is also a record of the Argentinian state's campaign to control and ultimately expel indigenous people from Patagonia and the Pampas.

This map was part of a series commissioned by the Argentine government for the 1876 Philadelphia Exposition (Centennial International Exhibition). It illustrates areas of white and Indian settlement, lines of communication and defense, roads, railways, and geographic features.

The map was produced in the context of resistance by Native Americans groups, especially the Mapuche, who were angered by encroachments by white settlers from Argentina and Chile into their lands (the two countries were competing to control the interior of the continent down through Patagonia). Settlement of newly opened lands was seen as a convenient way to alleviate the effects of the Panic of 1873 and the resulting economic crisis. In the preceding decades, Argentine military expeditions had attempted to exterminate resistant indigenous groups in Buenos Aires Province, while Mapuche warriors led by Calfucurá had attacked white settlements in 1872, killing dozens. In 1875, Mapuche resistance took the form of raids to steal cattle and other livestock from white farmers, who in response petitioned the government to take punitive action.

Adolfo Alsina, Argentine Minister of War and the Navy, who ordered this map's production, had experience handling relations with indigenous groups from his time as Governor of Buenos Aires Province, and favored a defensive policy to pacify the frontier. Accordingly, he oversaw the construction of a line of defense (the dashed line here, known colloquially as 'zanja de Alsina') consisting of a massive trench with forts and military posts at regular intervals, along with telegraph lines, roads, and railways to allow for rapid communication and movement. The planned second stage was to build another line of fortifications into the frontier, roughly from Bahía Blanca to San Luis, to encompass 'subdued Indians' and open more space to secure white settlement.

Alsina died unexpectedly from kidney failure in December 1877 and his relatively moderate policies towards the Indians died with him. His successor as Minister of War and the Navy, Julio Argentino Roca (later a President of Argentina), shifted towards an offensive policy, pursuing ethnic cleansing and even genocide against native people who opposed the Argentine state. Within a few years, Roca's troops, using the latest military technology, including breach-loading rifles, had killed hundreds of Indian warriors, captured many more, and opened the door for white settlers to inhabit the former Indian lands in the Pampas and Patagonia.

The Story of the Map

When President Nicolás Avellaneda ordered Alsina to prepare material on Argentina's geography for the 1876 Philadelphia Centennial Exposition, Alsina entrusted Melchert with the crafting of a geographical map depicting all territory under the government's authority, as well as lands the military intended to take from indigenous people. Since very little was known about the Pampas, Melchert resorted to a range of sources, including earlier maps and reports in addition to his own experiences, to create this remarkable map, which was far more detailed than earlier efforts. Even still, the southern portion of the map between the Colorado and Negro rivers is noted simply as 'campos no esplorados.' Though it contains some errors, this map was a milestone in the history of Argentine cartography and an important record of the government's shifting policy towards native peoples.

This map was published to accompany the book Die Argentinische Republik, im Auftrag des Argentin-Central Comité's für die Philadelphia-Ausstellung (also published in Spanish and English). It was made in December 1875 by F.L. Melchert, lithographed by Alberto Larsch, and engraved by Curt Stiller. It is held by the Biblioteca Nacional de Uruguay, the British Library, New York University, and Indiana University, but is very scarce to the market.