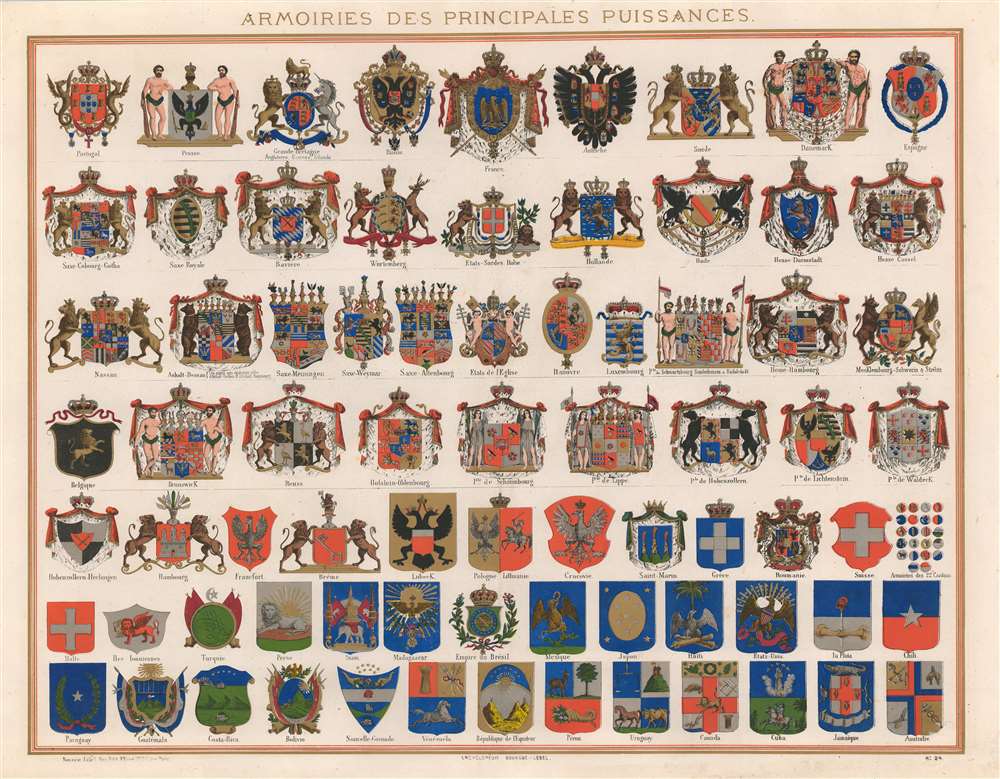 This is a c. 1860 Bouasse-Lebel chromolithograph chart of armorial crests of the era's major world powers. The chart details seventy-six different crests. The world powers of the 19th century fill the first row: Great Britain, France, Prussia, Austria, and Russia, along with five others. Many of the rest hail from German duchies and principalities, but countries such as Holland, Luxembourg, and Belgium also appear, as do the Papal States. Mainly concerned with Europe, only a handful of non-European countries are represented. These include the United States, Persia, Bolivia, Costa Rica, Japan, and Mexico. This chart is also notably an early example of commercial chromolithography.

This chart was created c. 1860 and published by Bouasse-Lebel. Several editions of this chart were published during the 19th century, nonetheless, we have been unable to locate any other examples of this edition.

Eulalie Bouasse-Lebel (1809 - 1898) was a French publisher. Born in Paris, she was the only daughter of Jacques-Auguste Lebel, a Parisian printer. She married Francois-Marie Bouasee, a foreman, in 1827, who abandoned Eulalie and her two children at some point, although it is unclear when. Eulalie founded her own printing firm in 1845 under the name 'Madame Bouasse, nee Lebel' and focused on religious imagery. She moved the printing house to 29, Rue St. Sulpice, then the center of the religious publishing community in Paris in 1847. In 1852, Eulalie sold her business to her eldest son, Henri, and her younger son, Emile(1832 - 1881), worked with Henri for some time. Emile left his brother's firm and started his own, Bouasse-Jeune, in 1867. Emile also based his company in St. Sulpice, and a rivalry erupted between the brothers and their firms. Both focused on religious art and were famous for their filigree, lace, and modern printing techniques, including chromolithography. Emile's widow and children took over his business after he died in 1881, and it remained in the family until the beginning of the 20th century. Henri died in 1912, and his son Albert took over Bouasse-Lebel. The company was drastically affected by the sharp decline in interest in religious art after World War II, along with the rise of cheap photographic reproductions. Albert died in 1955, and Bouasse-Lebel closed in the 1960s. Learn More...

Very good. Light wear along original centerfold. Blank on verso.
Looking for a high-resolution scan of this?