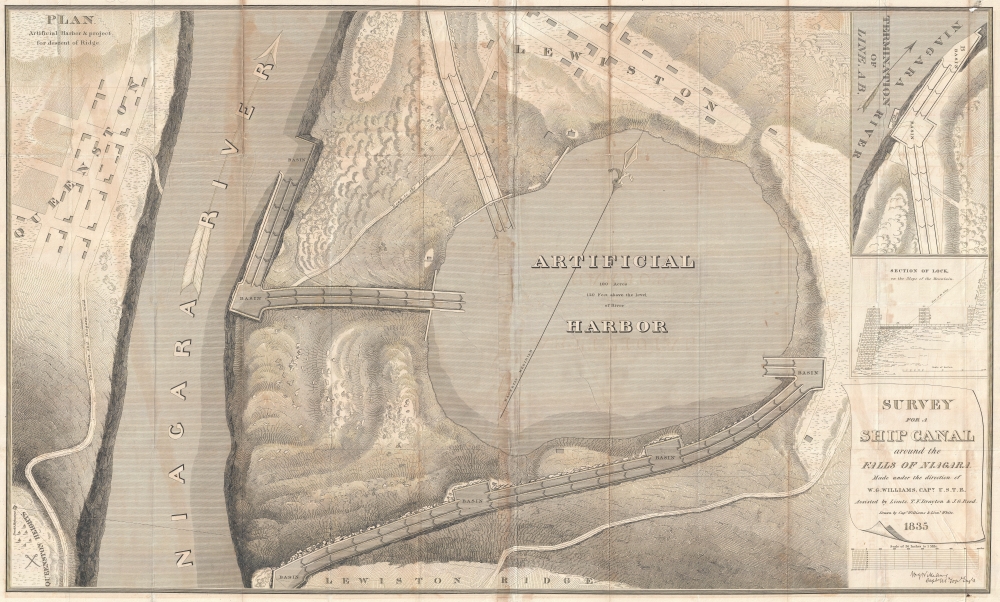 Niagara Falls! Depicts both sets of double locks in detail along with a profile diagram of a lock.
$650.00

By creating an artificial harbor, ships traversing the canal could more easily change direction to descend the further 120 feet to the Niagara River. Captain Williams proposed the use of double lock systems, both to descend Lewiston Ridge and to reach the river. Double locks allow for more speed and less of a possibility for delays. By using a double lock system, ships can travel in both directions at the same time. Double locks can also serve as holding pools when only one of the locks is in use. By placing basins at intervals along the lock system, it allows for ships to change between the two parallel systems of locks if, for some reason, one of the two systems became inoperable.

The map not only depicts the artificial harbor and the two systems of double locks, it also illustrates the surrounding area. The Niagara River traverses the map along the left side, with Queenston, Ontario on its left and Lewiston, New York on its right. An arrow indicates the direction of the current. Several buildings are depicted in both Queenston and Lewiston, although none of them are labeled. An inset map of the Termination of Line AB. is situated in the upper right corner, and a profile diagram of one of a section of lock is located directly below it. The map is endorsed by William G. Williams in the lower right corner.

Very good. Some transferrence. Backed on archival tissue for stability. Blank on verso.