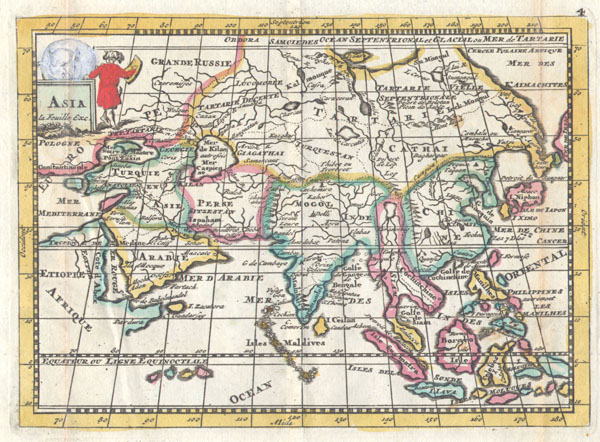 A very scarce, c. 1706, map of Asia issued by Daniel de La Feuille. Extends from the Mediterranean to Alaska and as far south as Java. Depicts the Mogol Empire in India, the kingdoms of Siam and Chochine, China, Arabia and Tartary. In China, the Great wall is shown. The Caspian Sea is wildly distorted, as is the Arabian Peninsula and Japan. North of Japan, Hokkaido is shown attached to the mainland. In central Asia, Tibet is labeled as are the Lop Nor salt flats in China. The Crimean peninsula is drawn as an island. In southeast Asia, a curious lake is drawn in what is today the Golden Triangle. The map suggests this body of water as a source for the Irrawaddi (Burma), Mekong (Vietnam), and Chao Phraya (Thailand) river systems. The allegorical title cartouche in the upper left quadrant features an elephant and what appears to be a young girl with a shield. This map was originally prepared for inclusion as chart no. 4 in the 1706 edition of De la Feuille's Les Tablettes Guerrières, ou Cartes choisies Pour la Commodité des Officiers et des Voyageurs, Contenant toutes les Cartes générales Du Monde, avec les particulieres des Lieux ou le Théatre de la Guerre se fait sentir en Europe..