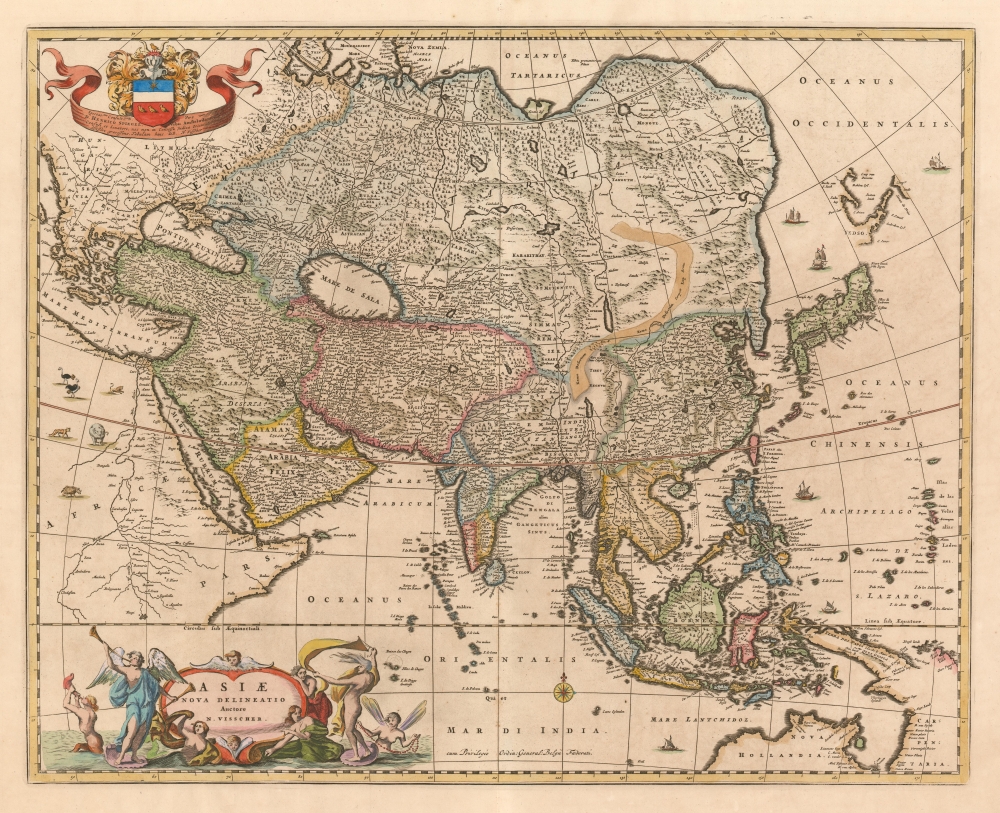 This is Nicolas Visscher's c. 1657 map of Asia, presenting an updated view of Pacific coast of the continent. The Visscher family generally employed larger plates and finer detail than the mapmakers of the first half of the 17th century, improving the clarity of the maps and allowing the addition of more geographical detail. The northern coast of Australia (Nova Hollandia on the map) and the coastline of New Guinea reflect the 1643 and 1644 voyages of Abel Tasman.

A Glimpse of Hokkaido

Japan and Hokkaido (Yedso) are mapped according to the 1643 discoveries of Dutchmen Maerten de Vries and Cornelis Jansz Coen. Vries and Coen were in search of gold and silver islands supposedly discovered early by a mysterious Spanish or Portuguese navigator, Juan de Gama. They sailed up the east coast of Japan and continued northward into the bay separating Honshū from Hokkaido. They skirted the east coast of this bay before discovering Kunashir, here Staten Land, the most westerly of the Japanese Kuril Island. They also sighted Iturup or Etorofu, the second Kuril Island. This island they only tenuously explored and named Compagnie, after the VOC, their sponsors. Subsequent maps assigned great mass to Compagnie on little more than speculation. These islands were not more properly mapped until the explorations of Vitus Behring.

Korea appears with minimal detail, but correctly indicated as a peninsula rather than the insular depiction common on maps from the late 16th and early 17th century.

It is a beautifully decorative map. Six ships sail along the coasts. The part of the map occupied by Africa is embellished with ostriches, lions, an elephant, and a rhinoceros. The map's lively cartouche depicts a festive (deafening?) scene: To the left, an angel and an ichthyocentaur blow upon horns. The sea-centaur has a conch; the angel's instrument resembles a vuvuzela.

He has a spare.

To the right of the cartouche a windy, naked male figure, perhaps Aeolus, performs a sort of dance-of-the-seven-veils with what appear to be sails. A pair of mermaids and a fairy look on, impressed. In the upper left, an elegant cartouche dedicates the map to the Hendrik Dirksen Spiegel (1598-1667), an Amsterdam Mayor, consul, and assessor of the East India Company.

This map appears to have first been included in Jansson's Novus Atlas of 1657-58, and was later included with Visscher's Atlas Contractus. The presence of the 'Cum Priviligeo' indicates a date no earlier than 1677, and that the map was probably included by one of the younger Visschers in their Atlas Minor, the composite atlas published by the family starting in the mid-1670 and continuing without change into the 18th century. Fifteen examples of the Atlas Minor appear in OCLC with varying pagination; the separate map is well represented in institutional collections.on from the old insular model appearing on Jansson's earlier maps.