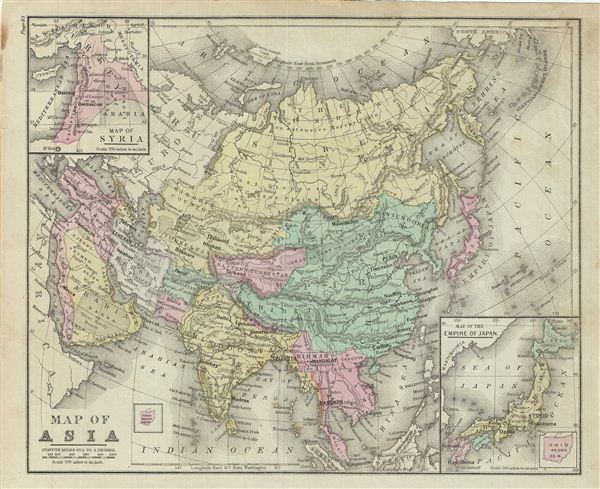 This is an example of David M. Warren's 1879 map of Asia. It covers from the Arabian Peninsula and Turkey eastward as far as Kamchatka and Japan. It includes the empires of Hindoostan (India), China (includes Tibet), Turkistan, Persia (Iran), Afghanistan, Beloochistan, Birmah (Burma), Japan, Russia, etc. Also included are portions of europe and the east Indies. An inset map of Syria is featured in the top left quadrant while the bottom right quadrant details the empire of Japan. Tibet and Korea (Corea) are included within the borders of the Chinese empire, while Kashmir (Cashmere) is rendered in a separate color. The Great Wall of China is identified. The disputed body of water between Korea and Japan is here identified as the 'Sea of Japan.' Taiwan or Formosa is mapped vaguely, representing the poor knowledge of the region prior to the Japanese invasion and subsequent survey work in 1895. Afghanistan is divided into Cabool and the southern province of Beloochistan (Baluchistan). The 'Tea District' is identified in southeast China while the northern part of Russia is marked as 'An extensive marshy plain.'

As this map was drawn, Imperial China wilted under the weak Qing Dynasty while the Russian empire attained the height of its pan-continental expansion. Turkey and the Middle east were under Ottoman rule while the British Raj governed of India.

Throughout, the map identifies various railroads, cities, towns, rivers, islands, mountain passes and an assortment of additional topographical details. The map is color coded according to regional and political boundaries with elevation rendered by hachure. Issued as page 85 in the 1879 edition of Warren's Common-School Geography.