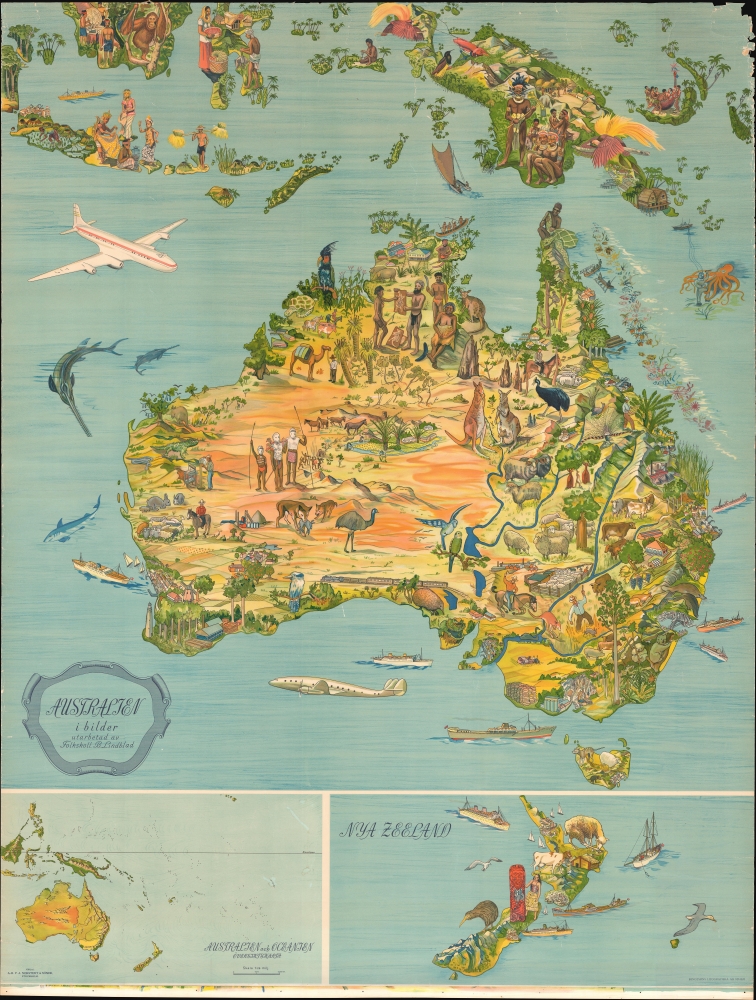 This is a c. 1947 B. Lindblad pictorial map of Australia, New Zealand, and Indonesia. The map depicts the region from Sumatra to the eastern coast of Australia and from Borneo and Sulawesi to Tasmania. Beautifully illustrated, Australia's native celebrated flora and fauna populate the map. Emu, parakeets, kangaroos, koalas, echidnas, bearded dragons, platypus, and a kookaburra are among the animals illustrated. A Tasmanian devil and the (now extinct) Tasmanian tiger are shown on Tasmania. Though unlabeled, cities are illustrated in profile throughout the continent, including Sydney and its famous harbor bridge. The Great Barrier Reef is illustrated off the northeast coast of Australia, with stunning colors meant to depict the corals. Aborigines are illustrated across the Outback and indigenous islanders are included on New Guinea and the islands of Indonesia. Two inset maps are situated along the bottom border. One depicts New Zealand, complete with an illustration of a kiwi, a bird native to the islands, and the other illustrates greater Oceania.

Though this map is undated, we have managed to narrow down the possible date range based on the presence of the aircraft. The plane on the left of the map is a Douglas C-74 Globemaster, a cargo aircraft built by the Douglas Aircraft Company between 1945 and 1947. Only fourteen of this particular model were built and were used by both the military and civilians between 1945 and 1969. The second, much more iconic, aircraft illustrated below Australia is a Lockheed Constellation. Several different models of Constellations were built between 1943 and 1958 and were used first by the United States Army Air Force and then by airlines. The Constellation holds the distinction of being the first commercial airliner with a pressurized cabin. The first Constellation to enter service with an airline was delivered to TWA in October 1945, and Qantas, and Australian Airline, took delivery of its first Constellation in October 1947, with flights between Sydney and London beginning that December. We have been unable to locate any examples in institutional collections and are aware of only one other example that has been on the private market.

Per Adolf Norstedt (January 28, 1763 - September 20, 1840) was Swedish merchant and publisher based in Stockholm, Sweden. Per Adolf founded Norstedt in 1821 with the acquisition of the Lindhska Publishing concern. He brought his sons, Carl and Adolf, into the business in 1823, renaming it P. A. Norstedt och Söner. In 1833, the firm took over all publications for the Royal Family, becoming the de facto state publisher. When Carl and Adolf died, both without an heir, the company fell to Emilia Norstedt, a nice of Per Adolf, who brought her husband, Gustaf Philip Laurin (1808–1859), and three children, Gösta Laurin (1836–1879), Carl Laurin (1840–1917) and Albert Laurin (1842–1878), into the business. Carl, who was trained as a civil engineer, upgraded the printing processes with advanced lithographic presses and modernized the overall operations. Today Norstedt it is the oldest and one of the largest continuously active publishers in Sweden. Learn More...

Good. Mounted on linen. Exhibits wear and some loss along edges. Some crackling. Blank on verso.
Looking for a high-resolution scan of this?