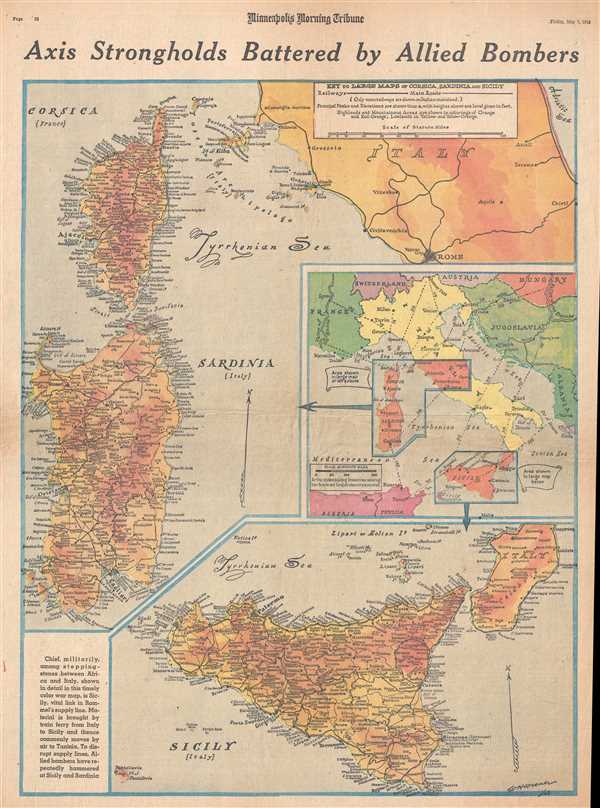 Depicts the Mediterranean islands that were critical to supplying Axis troops in North Africa.

This is a Friday, May 7, 1943 William H. Wisner and Minneapolis Morning Tribune map of Italy, Corsica, Sardinia, and Sicily. The map depicts all three islands (Corsica, Sardinia, and Sicily) in full and depicts Italy from the Tyrrhenian Sea to the Adriatic Sea and from Campiglia-Marittima to Rome. At this time in 1943, the North African campaign was nearing its conclusion. Thus, Allied air power was hammering German and Italian supply lines as hard as possible, to force the Axis forces surrounded in Tunisia to surrender. Sicily was a key part of this supply chain, and by depriving the Axis troops of much needed supplies, the likelihood that the army would be able to outlast the besieging Allied forces was not high.

The depictions of Sicily, Sardinia, and Corsica illustrated here are incredibly detailed. Innumerable cities, towns, and settlements are illustrated and labeled throughout the three islands, including Palermo, Siracusa (Syracuse), Messina, Cagliari, and Ajaccio. Major roads and railroads are also illustrated on all three islands, along with principal peaks and their elevation above sea level indicated in feet. The map of Italy, however, only includes a handful of labeled cities (including Rome and Vatican City), and the major road network. An inset map of the region, depicting from the Alps to Tunisia, is situated along the right border and includes airline distances between the region's major cities.

This map was created by William H. Wisner and published by the Minneapolis Morning Tribune on Friday, May 7, 1943.

William H. Wisner (1894 - December 11, 1963) was the manager of the editorial art department of The Chicago Tribune. Born in Brooklyn, Wisner attended Columbia University and the College of the City of New York. He then attended the Julian academy in Paris where he received his formal art training. He began working for the Tribune in 1913, but left the newspaper during World War I to serve as an attache to the inter-allied mission for propaganda. He rejoined the Tribune in 1919 as head of its editorial art department. Wisner held several posts over the course of his career with the Tribune, including several influential and revolutionary positions concerning the integration of photography into the newspaper. His greatest work, though, was 'when he devoted himself entirely to the complicated task of preparing full-color map which provided Tribune readers with up-to-the-minute developments on the global battlefronts.' In 1948, Wisner resumed full management of the editorial art department and held that position until his retirement in January 1963. Learn More...