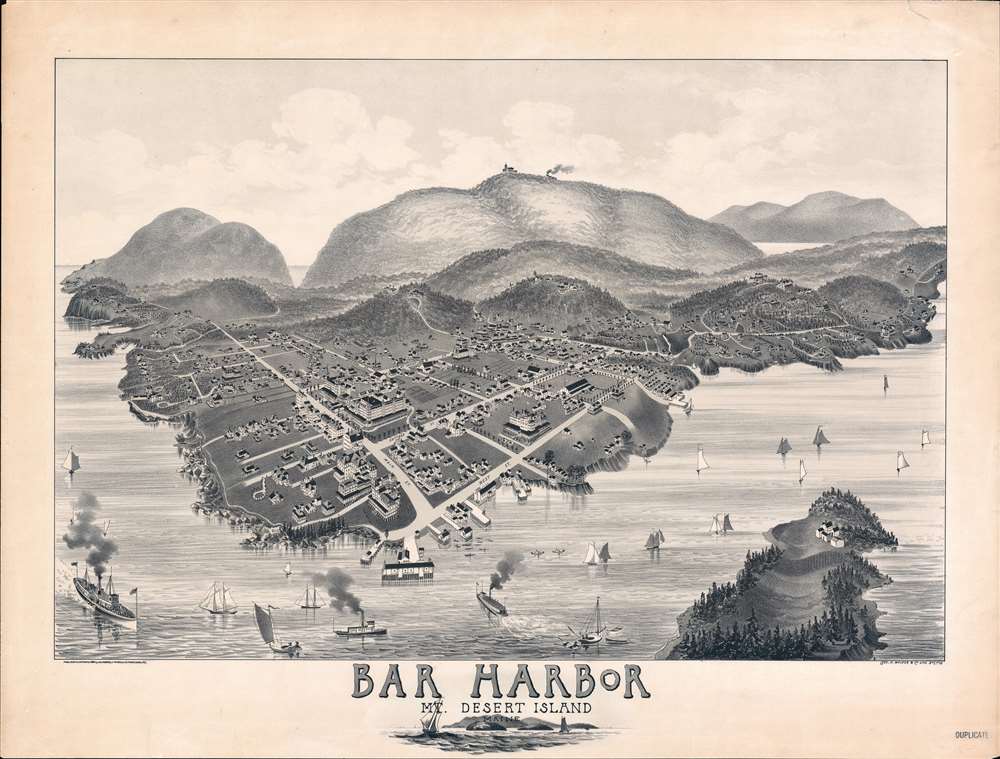 A rare and highly unusual 1886 bird's-eye view of Bar Harbor, Mount Desert Island, Maine. This view was drawn and published to publicize the rebuilding of the Green Mountain Hotel (following a fire) and the inauguration of the Green Mountain Railroad - here visible at the summit of Cadillac Mountain. The view looks southwest on Bar Harbor from a hypothetical point somewhere above Sheep Porcupine Island. Bar Island appears in the lower right. From a convergence near the old ferry terminal, Bar Harbor's two main commercial arteries (then, as now), Main Street and West Street, radiate outward. Perspective has been exaggerated to emphasize the verticality of Cadillac Mountain, Champlain Mountain, and Eliot Mountain - the three peaks nearest to Bar Harbor. This unusual exaggeration of the vertical perspective also serves to uniquely emphasize the Green Mountain Hotel and Railroad, on the peak of Cadillac Mountain, which, although technically in the background, are clearly the focal point of the entire piece.

Bar Harbor is the largest settlement on Mount Desert Island and for most, the gateway to Acadia National Park. The town can trace its founding to 1796, when Englishmen Israel Higgins and John Thomas settle here. It was initially named Eden, after the statesman Sir Richard Eden, but from the early 1800s was colloquially known as 'Bar Harbor' - after the sand and gravel bar, visible at low tide, which leads across to Bar Island and forms the rear of the harbor. (The name 'Bar Harbor' was not officially adopted until 1918.) By the late 19th and early 20th century, Bar Harbor hosted 5 grand hotels and was a rival to Newport, Rhode Island, as an elite summering destination. Titans of commerce vied with one another to build the most extravagant mansions. The 1880s, when this view was issued, can rightly be considered the beginning of Bar Harbor's Gilded Age, which lasted until 1947.

Most of the buildings illustrated here, as well as 10,000 acres of Acadia National Park, nearly half the eastern side of Mount Desert Island, were burned in 1947 when a long drought precipitated an enormous forest fire. While the basic street layout remains the same today, most of Bar Harbor's Gilded Age architecture, as depicted here, was lost, including all 5 grand hotels. The most notable survivor is Saint Saviour's Episcopal Church and Rectory, at 41 Mt. Desert Street - evident here and famous today for its glorious Tiffany stained glass windows.

This view prominently displays Cadillac Mountain, formerly Green Mountain, the highest mountain on Mount Desert Island - often called the first place in the United States to see the sunrise. Although today the peak is barren, in the 1880s, there was a hotel at the peak, the Green Mountain House, and a specially built narrow gauge railroad, the Green Mountain Cog Railway, intended to carry guests from Eagle Lake to the summit - both of which are visible on this view.

There was a small weather station and cottage at the top of Cadillac Mountain as early as 1853, but it was not until 1880 that a proper hotel, the original Green Mountain House, was constructed. The hotel was instantly popular with tourists justly impressed by the spectacular setting. The original structure, a grand and multi-story Victorian building, was heavily damaged by fire in 1882. By 1883, the year this view was issued, Francis Hector Clergue built a new if slightly smaller Green Mountain House and inaugurated the accompanying Green Mountain Railroad. On August 2, 1884, both the remains of the old Mountain House and the new Green Mountain House burnt to the ground - an inferno visible from some 50 miles away. Undeterred, in 1885-56 Clergue, again rebuilt, this time the even larger Victorian Gothic hotel present in this view. Moses Foster Sweetser, in his Chisholm’s Mount-Desert Guide-Book, describes the hotel,

The hotel is of modern construction, high-studded and airy, with twenty commodious rooms, broad encircling piazzas, an observatory-tower, and a dining-hall where good meals are served at a low figure. It is several hundred feet from the railway. Invalids are sometimes brought here as to a sanatorium, the clear sweet air of the mountain-top working favorably for their recovery and worn-out men find in the quietude of the place, and its novelties of view and air, much that tends to revivify and strengthen them. (Sweetser, Moses Foster, Chisholm’s Mount-Desert Guide-Book, p. 36 - 37.)

The Green Mountain Railroad, which provided access to the hotel, was a 2-car cog railroad from the shores of Eagle Lake to the Summit of Cadillac mountain - a distance of 6,300 feet that gained 1,258 feet in elevation. Passengers enjoyed breathtaking views while ascending at the stately pace of two miles per hour. The single car held eight wooden benches capable of holding roughly 50 passengers. The Green Mountain House and The Green Mountain Railway shut down in 1890. The trains, tracks, and cars were old to the New Hampshire White Mountain Railroad.

Mount Desert Island, so named because of its many bald rocky mountaintops, has been a tourist destination since the mid-19th century, when it was discovered by outsiders, artists, journalists, Hudson River School artists, and other patrons, known collectively as the 'Rusticators.' Undaunted by crude accommodations and simple food, they sought out local fishermen and farmers for accommodation and guidance. Summer after summer, the rusticators returned to renew friendships with local islanders and, most of all, to savor the fresh salt air, scenery, and relaxed pace. Soon the villagers' cottages and fishermen's huts filled to overflowing, and by 1880, 30 hotels competed for vacationers' dollars. Tourism was becoming the island's primary industry. Drawing the attention of the wealthy and influential, the island was designated as Sieur de Monts National Monument by President Woodrow Wilson in July 1916. In February 1919, the area's status was officially changed from a National Monument to National Park, making it the first National Park east of the Mississippi River. With the change to a National Park came a name change, to Lafayette National Park. It was not until January 1929 that the park was given its current name, Acadia National Park. Acadia is unlike most other National Parks as its creation was encouraged by numerous private individuals. One, John. D. Rockefeller, purchased a summer home in Bass Harbor in 1910. Rockefeller began buying up land on the island with the goal of creating a system of carriage roads to make 'one of the greatest views in the world' accessible to all visitors.

This view was drawn by George W. Morris of Portland and published in Boston in Boston by the lithographic firm of George W. Walker. This view rare with but six examples known. These are held at the Library of Congress, the University of Pennsylvania, the Bar Harbor Historical Society, and elsewhere. This is a once-in-a-lifetime opportunity.

George W. Morris (March 1853 - 1929) was a Portland, Maine, based publisher, lithographer, and photographer. He published books and postcards highlighting the beauty of northern New England. Morris was born in New York, but by the 1870s had relocated to Bangor, Maine. In the 1880s, he move to Portland, where he spent the remainder of his life, building a booming postcard, bird's-eye view, map, and novelty publishing business. He initially began printing color postcards in Germany, where chromolithographic printing was more developed, but by the late 19th century, began printing domestically. He is credited with issuing some of the first chromolithograph postcards in the United States. By 1920, he owned a small business specializing in toys. He married Tressie Lee Wellman (1856 - 1922) in 1883. Learn More...


George H. Walker (January 4, 1852 - 19??) was a Boston based publisher of books, views, and maps active in the late 19th and early 20th centuries. Walker started his life as a dry goods merchant but developed an active interest in publishing during the early 1870s. Walker began publishing in 1878 when he partnered with an unknown New York Firm. Two years later, Walker brought the operation in house by partnering with his brother , Oscar W. Walker, in the opening of a lithography studio at 81 Milk Street, Boston. Shortly thereafter the firm expanded to new offices at 160 Tremont Street, Boston. The Walker brothers produced a large corpus of works, most of which focused on travel and tourism in New England. Walker also established the Walker-Gordon Milk Laboratory. This interesting investment was based on the premise that infant deaths could be avoided by providing higher quality milk. The company eventually became a great success, producing a high quality cow milk that closely resembled human breast milk. In the process the Walker-Gordon laboratory developed many of the dairy health standards that are still with us today. Learn More...