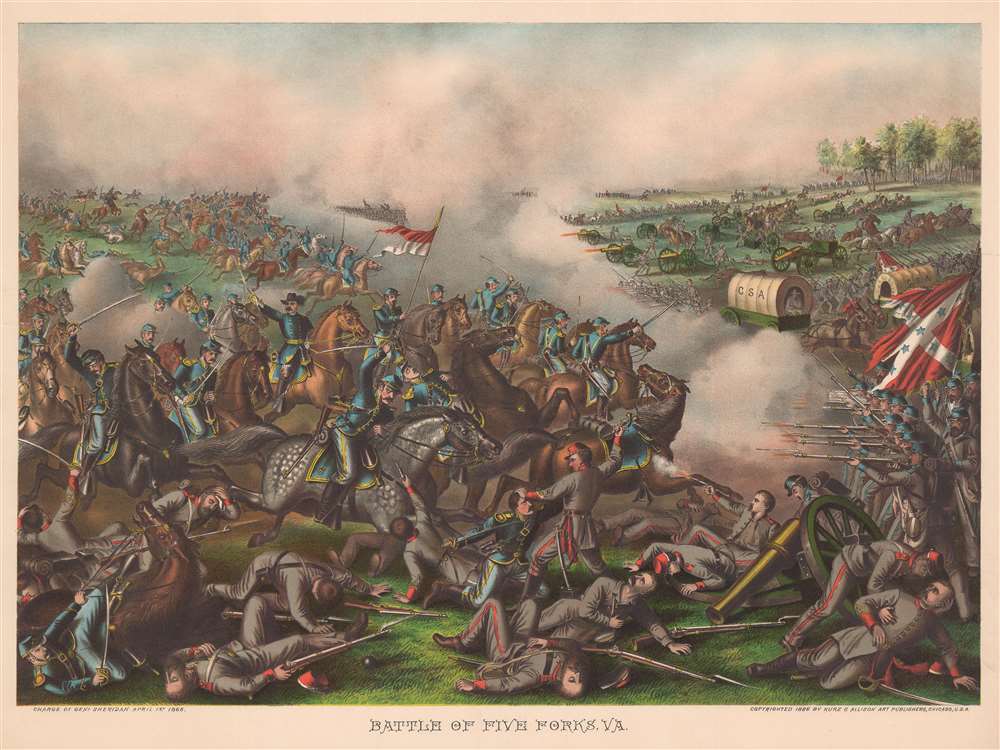 Pivotal Union victory near the end of the American Civil War.
$850.00

This is an 1886 Kurz and Allison view of the pivotal Battle of Five Forks during the American Civil War. Union forces, most mounted on horseback, are illustrated charging Confederate lines from the left. Brutal hand to hand combat dominated the foreground, while an inoperable Confederate cannon lies derelict in lower right. Union cavalry stretches to the horizon, charging through a cloud of gunpowder towards the Confederate lines. Other Confederate troops mount a hasty if orderly retreat.

The pivotal Battle of Five Forks occurred near the end of the Siege of Petersburg. Five Forks was a critical road junction southwest of Petersburg along Confederate General-in-Chief Robert E. Lee's final supply line, the South Side Railroad. This route was also one of Lee's final escape routes from Petersburg. In the days leading up to the Battle of Five Forks, Union General Ulysses S. Grant orchestrated several smaller battles along the Confederate defensive line south of Petersburg. Each action ended in a Union victory. Lee knew that with this series of victories, Grant would send troops to Five Forks to cut off Petersburg and Richmond from the South Side Railroad. In response, Lee sent reinforcements under the command of Major General George Pickett to hold Five Forks 'at all hazards'.

Battle erupted at Five Forks on April 1, 1865, after several small skirmishes. The battle raged all day, with numerous charges and counterattacks. Union forces seized Five Forks, but were unable to cut off the Confederate lines of retreat. The following day, Union attacks broke through Confederate lines at the Third Battle of Petersburg and forced the Confederate Army of Northern Virginia to evacuate. The American Civil War (1861 - 1865) ended on April 9, 1865, just seven days later, at Appomattox Court House.

This view was created and published by Kurz and Allison in 1886. Two examples are cataloged in OCLC and are part of the collections at the Library of Congress and the University of Virginia. Two more OCLC references exist for this map, but they are empty, suggesting that former cooperative members created them.