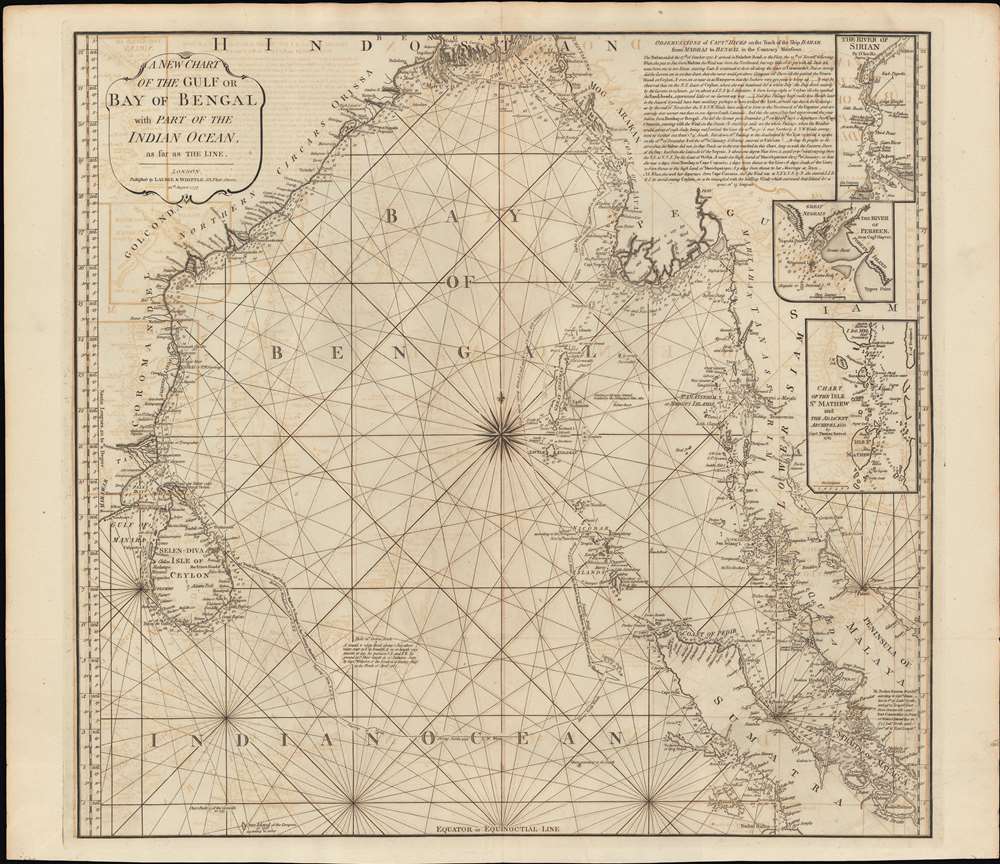 This is a fine example of Laurie and Whittle's 1794 nautical chart or maritime map of the Bay of Bengal. The map covers from southeastern India and Ceylon (Sri Lanka) eastward to eastern Malaysia, north as far as the mouth of the Ganges River, and south to central Sumatra. There are three inset maps: The River of Sirian (based on D'Anville), but in fact the modern day Irrawaddy River, Burma / Myanmar; The River Perseen (based on Hayter), in fact the modern day Pathein River, Burma; and the Isle St. Mathew (after Thomas Forrest, 1783), which is probably the modern day Zadetky Island, Burma, but it is not clear. The Andaman and Nicobar Islands are in the center of the Bay, near the wind rose. In the upper right there is a lengthy observational note attributed to Captain Hicks and the ship Bahar on a 1770 voyage from Madras to Bengal in the Monsoon season.

In the late 17th century the Bay of Bengal was a critical transit for ships sailing between India and Southeast Asia. While the waters there are warm and generally calm, the region is subject to monsoon weather patterns that often befuddled European mariners, hence the great attention to sailing routes and the Hicks annotation.

This chart was prepared for the 1797 edition of in Laurie and Whittle's East-India Pilot . Although most charts in the Pilot were derived from earlier maps prepared for Jean-Baptiste d'Apres de Mannevillette's 1745 Neptune Oriental, this particular chart is a new and uniquely British production. We are aware of two editions, 1795 and 1797, as here, but there may be more.

Very good. Some transference and offsetting. Wear and verso reinforcement on some original fold lines.