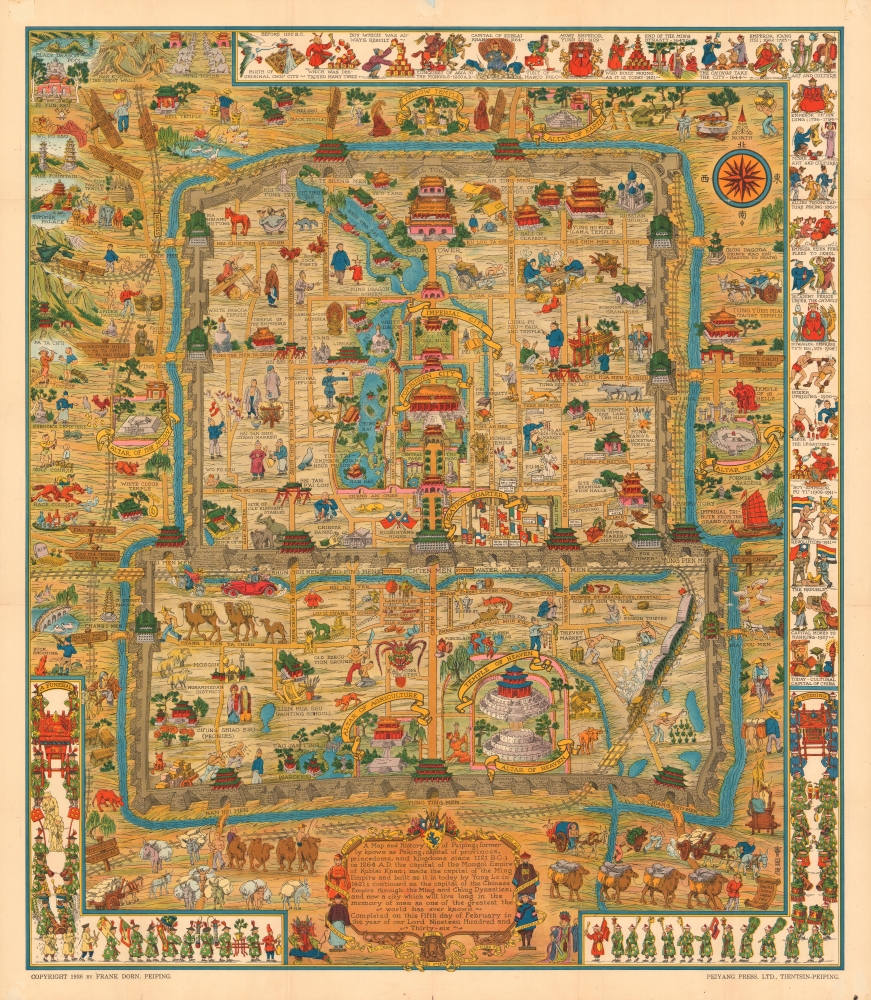 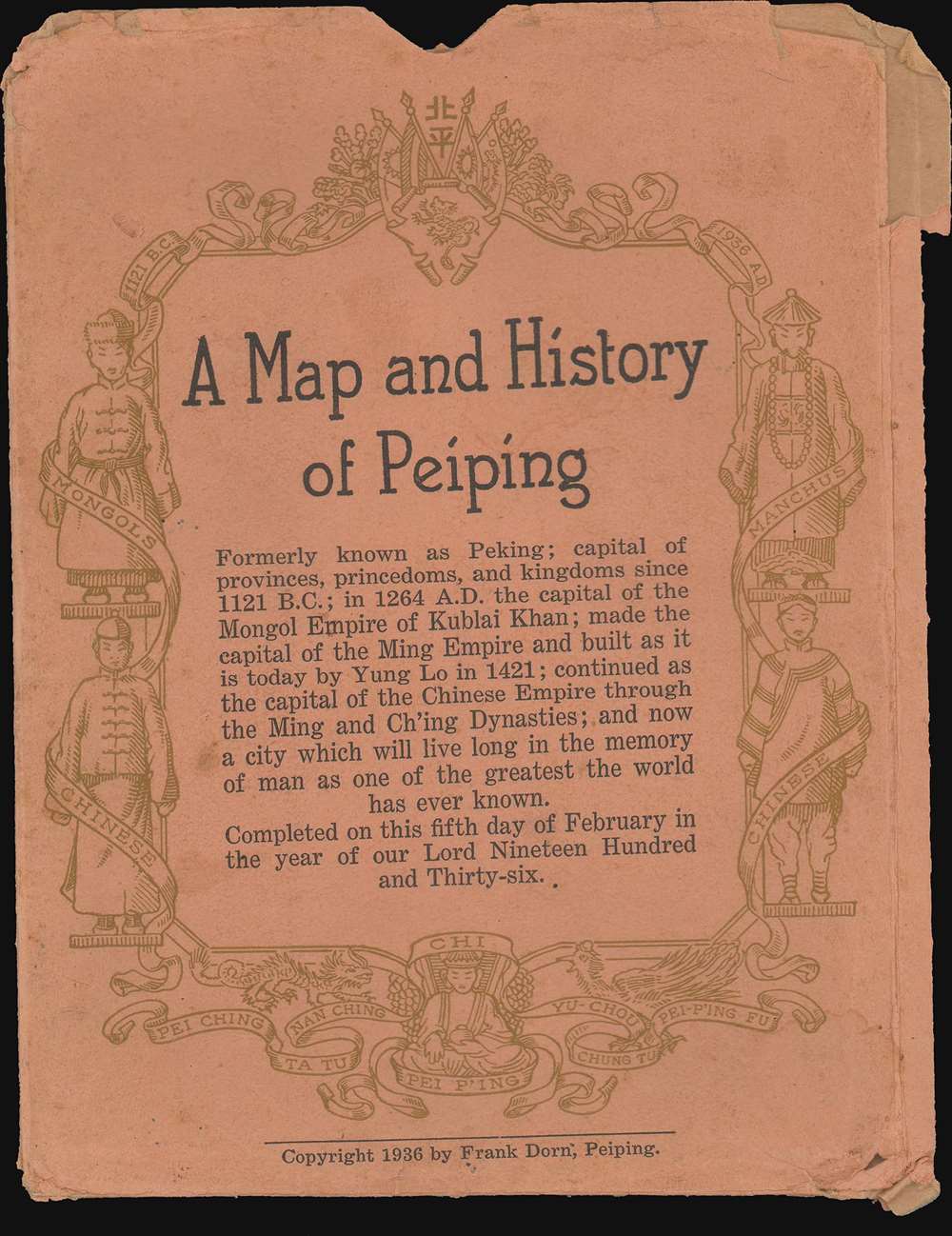 An example of Frank Dorn's iconic 1936 chromolithograph pictorial map of Beijing or Peking, China. Considered one of the great maps from the Golden Age of Pictorial Cartography, this map details Beijing as contained within the old city walls as well as parts of the surrounding area. Dorn combines cartographic accuracy with a dense array of ethnographic and historical vignettes intended to illustrate this history of Beijing. Some of these include the Old Execution Ground, the Eunuchs' Cemetery, the Dog Temple, the Temple of Eighteen Hells and the Spider Pagoda, among countless others. The elaborate border takes the form of a chronology of Beijing, with illustrated annotations such as 'Decadent Period under the Ch'ings' and 'Capital of Kublai Khan 1264'. This is the first edition of this map, as it bears the flag of Nazi Germany in the Legation Quarter. Later editions of the map removed the Nazi flag.

This map is the most famous of Dorn's two cartographic productions and grew out of his fascination with Chinese history. In the preface to his 1970 book The Forbidden City: The Biography of a Palace, Dorn describes the inception of this remarkable map:

Pictorial qualities have been common in cartography from at least from the 16th century, when publishers like Braun and Hogenberg incorporated view-like qualities and other pictorial elements into their famous city plans. Braun and Hogenberg, and similar cartographers, issued their town books to express, not necessarily the geography their subjects, but rather the 'essence' of the town/city. As mathematics and surveying principles became more advanced, travel increased, and the ability to translate 2 dimensional cartographic perspectives into an understanding of the actual world became commonplace, maps themselves transformed. This trend is a recognizable progression that evolved from the 17th to the 19th centuries. By the late 19th century most maps had become geographical tools that illustrated the region cartographically, but failed in the original raison d'être as expressed by Braun and Hogenberg, to illustrate a place's 'essence'. So, where a city map of 19th century Paris might provide a completely navigable presentation of the city, one could glean almost nothing of Paris' character from it. In the late 18th century, the first modern 'pictorial' style maps developed. These maps, like Tomas Lopez's 1788 map of Seville, attempted to provide both cartographic accuracy and pictorial elements that might convey the character of the city. In that case, Lopez incorporated pictorial vignettes to illustrate important buildings and monuments. This style became increasingly commonly throughout the 19th century and early 20th centuries, particularly for centers of commerce like London, Paris, and Rome, where they are often mass produced and referred to as 'monumental' maps. The style further evolved in the early to mid-20th century, when revolutionary cartographers and illustrators like MacDonald Gill, Jo Mora, Frank Dorn, Ernest Dudley Chase, and many others, combined vignette style illustrations, modern printing techniques, inspiration from Japanese printmaking and manga, and from clever satirical cartographers/artists like Fred Rose, to produce maps that once again focused on revealing the essence a place, usually, but not always, at the sacrifice of cartographic precision.

This map was published in Tientsin and Beijing, China by the Peiyang Press, in 1936. There are two editions, one with and one without the Nazi German Flag on the German legation. The present example is the edition with the flag. Scarce in good condition with binder.

Frank 'Pinky' Dorn (June 25, 1901 - July 26, 1981) was an American artist, 'old China hand,' and military officer active in East Asia during the middle part of the 20th century. Dorn was born in San Francisco California and later studied at West Point after which he was commissioned in the Field Artillery. He served in the Philippines from 1926 to 1929 and became an instructor at the Field Artillery School from 1930 to 1933. Dorn moved to Beijing in 1934 where he studied Chinese. It was during this period that Dorn made his greatest contribution to cartography, his iconic pictorial Map and History of Peiping. Dorn's important map, issued in 1936, followed in the artistic-cartographic style of Jo Mora (1876 - 1947), with whom he was acquainted and whose work he admired. During World War II (1939 - 1945) he was assigned as an aide to Brigadier General 'Uncle Joe' Stilwell in the Burma theater under whom he served from 1939 - 1942. There is some indication that Dorn may have served as a field cartographer under Stilwell, but none of these maps are known to have survived. After the war, he was elevated to the rank of Brigadier General and served from 1944 to 1945 as the commander of the China Training and Combat Command. Dorn retired 1953 and returned to San Francisco where he devoted the remainder of his life to painting. Apparently he got involved with the psychedelic movement and produced a number of paintings to this effect. Dorn died in 1981 and was buried with full military honors at Arlington National Cemetery. Learn More...


The Peiyang Press (fl. c. 1928 – 1949) was a Chinese publisher active in Tianjin and Beijing before and during World War II. The press focused on books and maps for the western traveler in China, including works in English, German, and Dutch. It is likely that the press was owned and operated by ex-pat westerners, although we have no evidence to support this theory. Among these publications were British authors Alice Leighton Cleather and Basil Crump’s English-language book Buddhism: The Science of Life (2nd ed., 1928), Robert M. Duncan’s Peiping Municipality and the Diplomatic Quarter (1933), a Chinese-Dutch dictionary (1935) and a 1937 album of black and white photographs of British military exercises in China. They also issued a detailed city plan, Map of Tientsin (1941). They are known to have published at least two influential pictorial maps in English during the 1930s, Frank Dorn's iconic A Map and History of Peiping and John Kirk Sewall's A Pictorial Map of Peiping. Learn More...