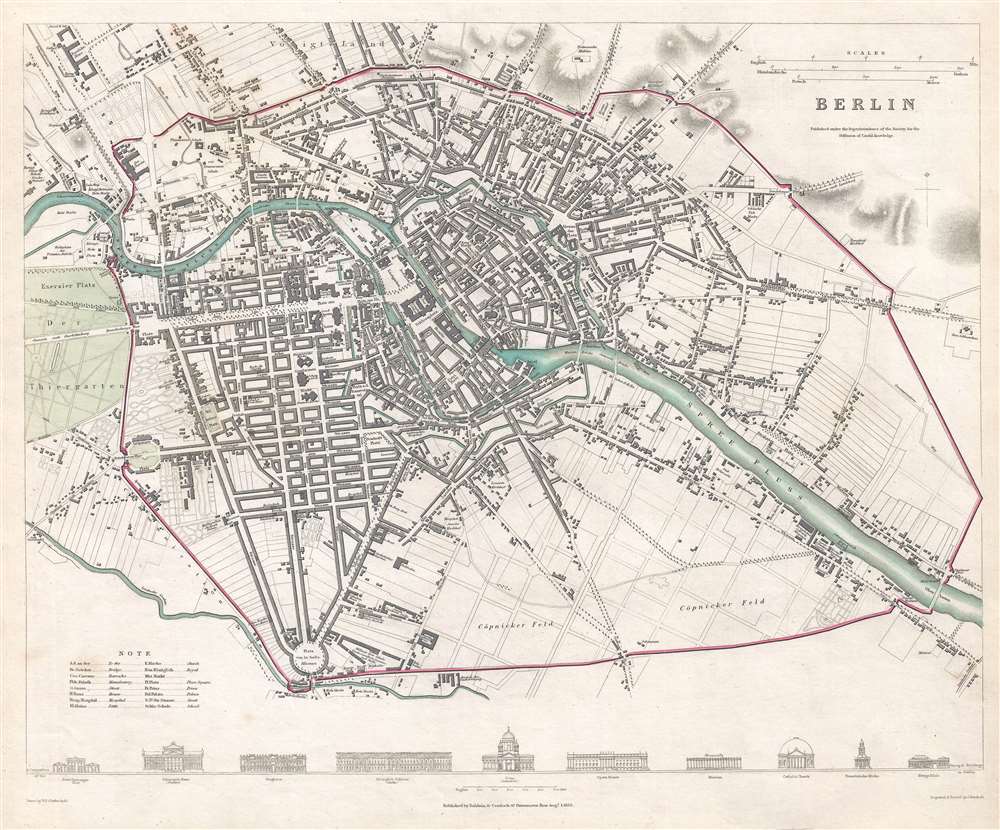 A detailed city map of Berlin featuring a profile sketch of the Brandenburg Gate.
$200.00

This is an 1833 Society for the Diffusion of Useful Knowledge city map or plan of Berlin, Germany. Centered on the island in the middle of the Spree River, the map depicts the city from the Voigtland district of Berlin to Mehringplatz (labeled here as 'Platz von la belle Alliance - an alternative name for the Battle of Waterloo where Napoleon was defeated) and from the Tiergarten to the city walls. Myriad streets are labeled throughout, along with individual buildings, parks, and squares. Profile views of famous buildings in Berlin are situated along the bottom border, including the Brandenburg Gate, the Zeughaus (the old Arsenal built between 1695 and 1730), and the Berliner Dom (Berlin Cathedral).

This map was engraved and printed by Josiah Henshall and published by Baldwin and Cradock under the supervision of the Society for the Diffusion of Useful Knowledge in 1833.

Josiah Henshall (c. 1801 - 1869) was an English engraver and printer. Born in London around 1801, Henshall was the William Henshall, who was known as an architectural and landscape engraver. Over the course of his career he engraved several city plan for the Society for the Diffusion of Useful Knowledge and works for several publications. He was also trained as an architectural and landscape engraver, producing 'Henshall's illustrated topography of twenty-five miles round London' in 1837-38. He also began painting in the 1840s, and exhibited seventy works in the London shows from 1848-63. He married his wife Mary sometime before 1841, and the couple had two daughters. Learn More...