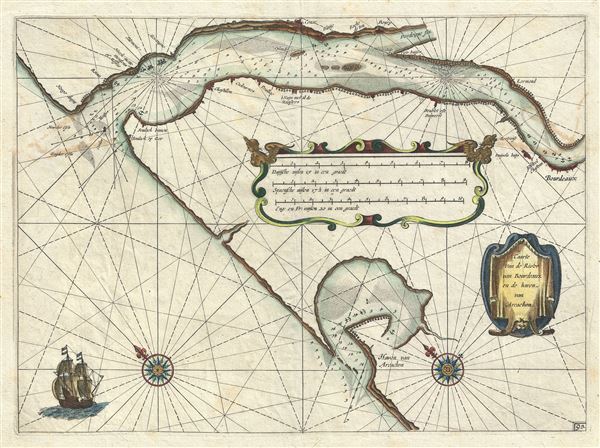 This is a beautiful c.1643 Johannes Blaeu map or nautical chart of the Bordeaux River in France. This maritime map covers part of the coastal department of Gironde from the Port of Arcachon to Royan (Roian) and the city of Bordeaux. It offers numerous rhumb lines, depth soundings, and some inland topographical detail. The Cordouan lighthouse is identified. Important coastal towns and cities are also noted. This region is the seat of the Bordeaux wine region and produces many of the world's finest reds. The map contains two compass roses and a beautiful illustration of a ship in the lower left quadrant is included. This map was issued in 1643 as plate no. 90 in Willem Janszoon Blaeu's Blaeus Zeespieghel.