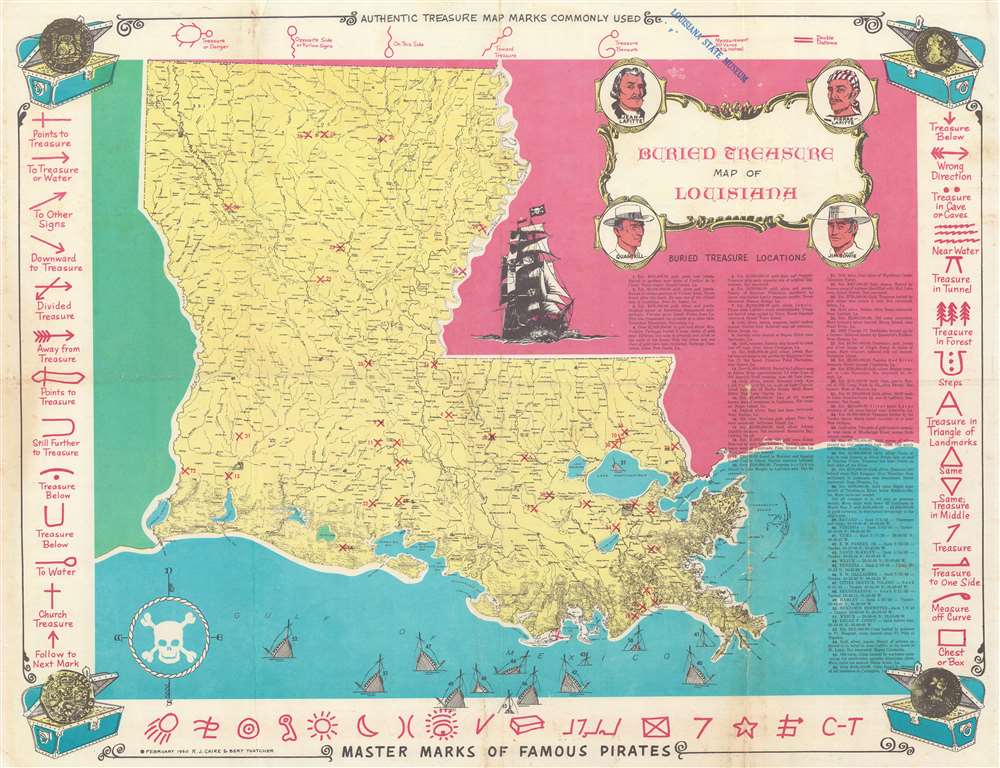 This is a 1960 Robert J. Caire and Bert Thatcher buried treasure map of Louisiana. Magenta 'X's mark the spots where fifty-six fortunes were 'partially recovered' or were supposedly buried by pirates, thieves, and the wealthy, or were lost at sea after a shipwreck. Each 'X' is numbered and corresponds with a short description of the fortune in question (ranging from $20,000 to $4,000,000).

Portraits of four historical figures adorn the title cartouche's corners. The top two are Jean and Pierre Lafitte, brothers and notorious smugglers/pirates active in Louisiana between 1805 and 1814. Per the map, they buried millions of dollars in gold around Louisiana, most of which had not been recovered when this map was produced (nor has it today). A portrait of William Quantrill, a Confederate guerilla leader during the American Civil War, appears on the lower left. Quantrill led the group known as 'Quantrill's Raiders', which, per the map, buried 3,000 Charles IV Doubloons near Ruston, Louisiana. The fourth, Jim Bowie, is most remembered for his role in the Texas Revolution and for taking part in the defense of the Alamo. It is unclear why his portrait is included. The whole is surrounded by a border consisting of markings commonly used on treasure maps. Each marking is labeled, allowing the viewer a small window into how a treasure map may have been composed.

Robert J. (R.J. 'Ronny') Caire (September 26, 1915 - December 31. 1982) was an American author, writer, and political public relations man. Caire grew up in New Orleans and attended Louisiana State University. He began his writing career in high school, when he was the editor of his high school paper and the author of a humor column. His professional writing career began in the 1930s when he found a job with a newspaper. Over the course of his career, Caire wrote newspaper articles and several pulp fiction novels under pen names. He also worked on nineteen political campaigns in Louisiana, eighteen of which were with the winning candidate. Robert was married to Katy Caire (March 1, 1917 - March 15, 1997), whose full name was Catherine Patricia Cecilia Barret Daly McGuire Caire, who was also an author. R.J. and Katy wrote several books together. Learn More...