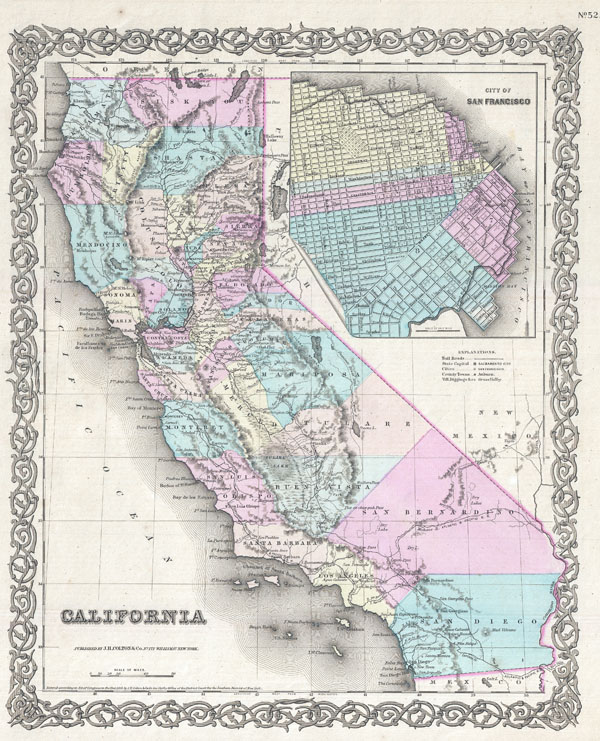 Issued roughly six years after the 1849 California Gold Rush, this is a beautiful 1855 first edition first state example of Colton's map of California. Colton's California with its San Francisco inset is one of the rarest and most desirable of all Colton atlas maps as it beautifully illustrates the rapid development throughout the state that followed in the wake of the Sutter's Mill discovery. Like most of Colton's state maps, this map was derived from an earlier wall map of North America produced by Colton and D. Griffing Johnson. Covers the entire state of California with a large inset of San Francisco in the upper right quadrant. Colton identifies a number of important emigrant and exploratory routes including Fremont's Route and three proposed routes for the Atlantic - Pacific Railroad. The Beswith route comes into the state near Pyramid Lake before turning south to terminate in San Francisco. At the bottom of them map are two forks of the Parke Route which ran through New Mexico before splitting off into two routes, one of which terminated in San Diego, the other of which ran up the coast to San Francisco. Offers a detailed treatment of the California gold region is Sacramento Valley, but makes no specific mention of gold deposits. This map further identifies various forts, rivers, mountain passes, fords, and an assortment of additional topographical details. Map is hand colored in pink, green, yellow and blue pastels to define territory and state boundaries. Surrounded by Colton's typical spiral motif border. Dated and copyrighted to J. H. Colton, 1855. Published from Colton's 172 William Street Office in New York City. Issued as page no. 52 in volume 1 of the first edition of George Washington Colton's 1855 Atlas of the World.