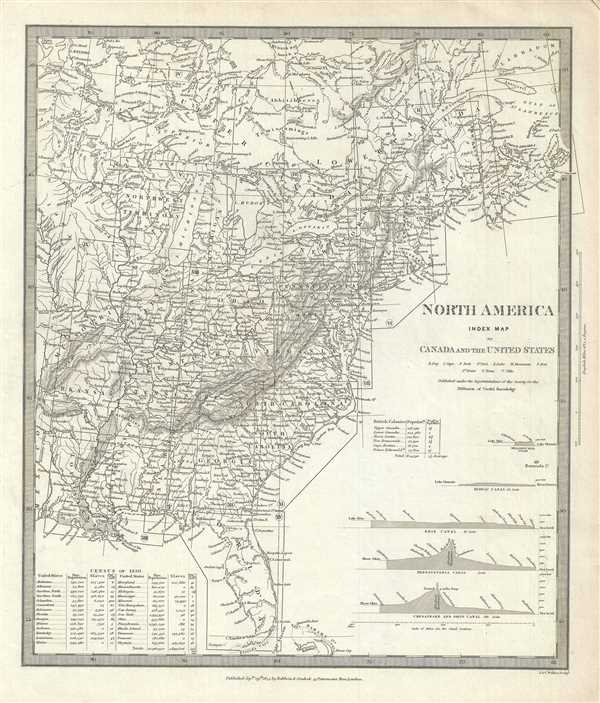 Map of the United States during westward expansion.

An uncommon 1834 first edition map of the United States and Canada issued by the Society for the Diffusion of Useful Knowledge, or S.D.U.K. The map covers the United States east of the Mississippi as well as the Trans-Mississippi territories of Louisiana, Arkansas and Missouri. Several Indian tribes are identified, including the Chippeways, Sioux, Foxes, and others. Wisconsin and Iowa are shown with amorphous boundaries. Most of what is today Wisconsin is identified as 'Northwest Territory.' The northern boundary of Maine is depicted according to British claims prior to the Treaty of 1842. The map also includes profiles of 5 canals in the lower right quadrant and the United States census of 1830 listing the free and slave population according to states. The map also serves as an index map to regional maps issued by the S.D.U.K.

This map is part of A Series of Maps, Modern and Ancient, issued by subscription. Each folder in the series would contain a set of two maps bound together. The map accompanying this folder, not included here, was of China and the Birman Empire. Original folder includes the names of committee members of the ‘Society’, list of maps previously published, the folder number, which is this case is LII, its contents and the printer and publication details. This map was engraved by J. and C. Walker and issued by the Society for the Diffusion of Useful Knowledge’s subscriber’s edition folder. The folder at the time was priced at 1 shilling plain or 1 shilling 6 pence colored. Published by Baldwin and Cradock and printed by William Clowes.