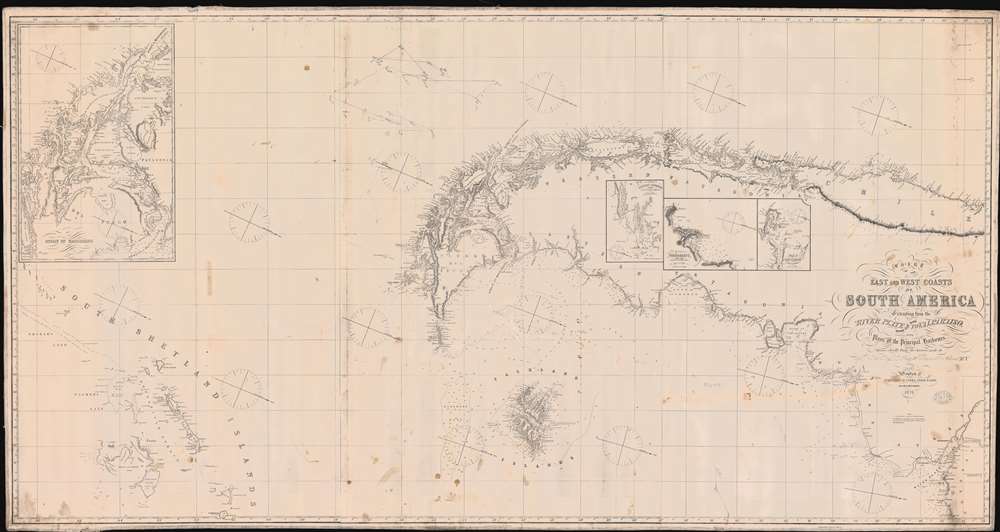 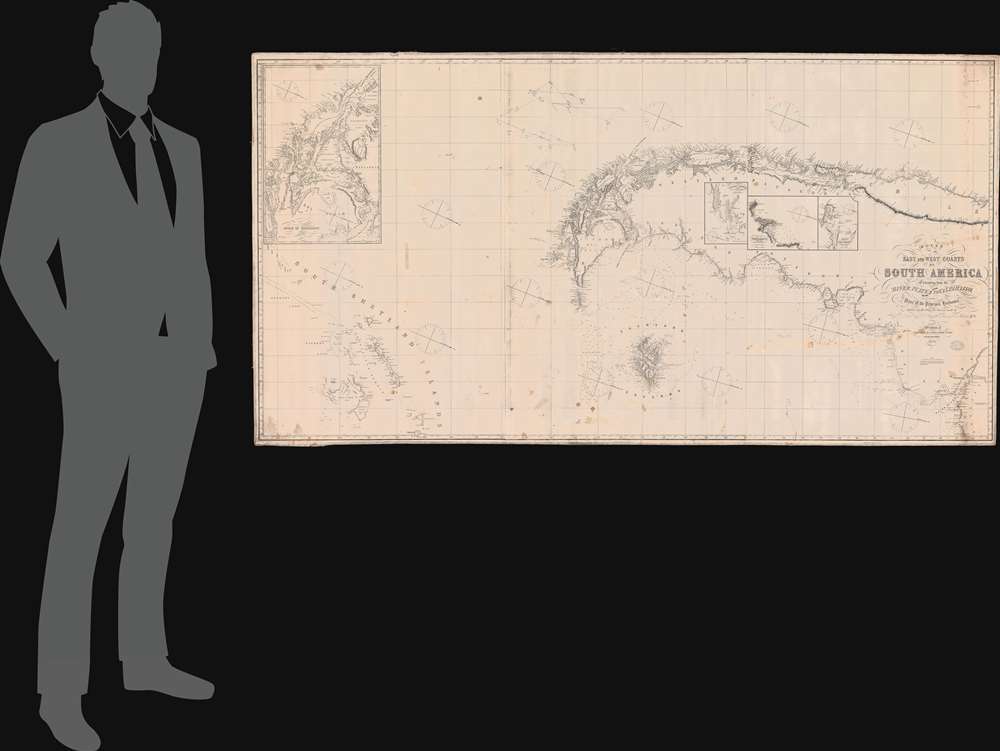 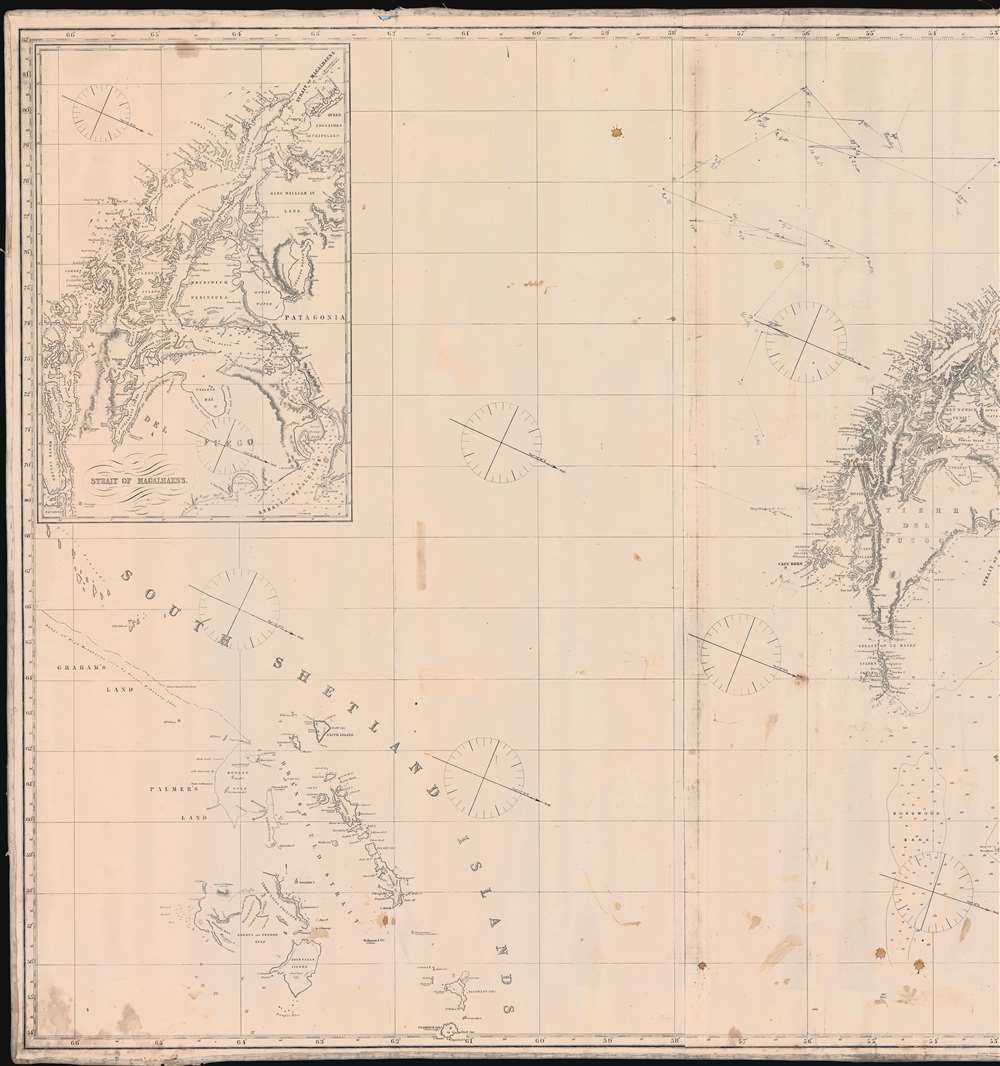 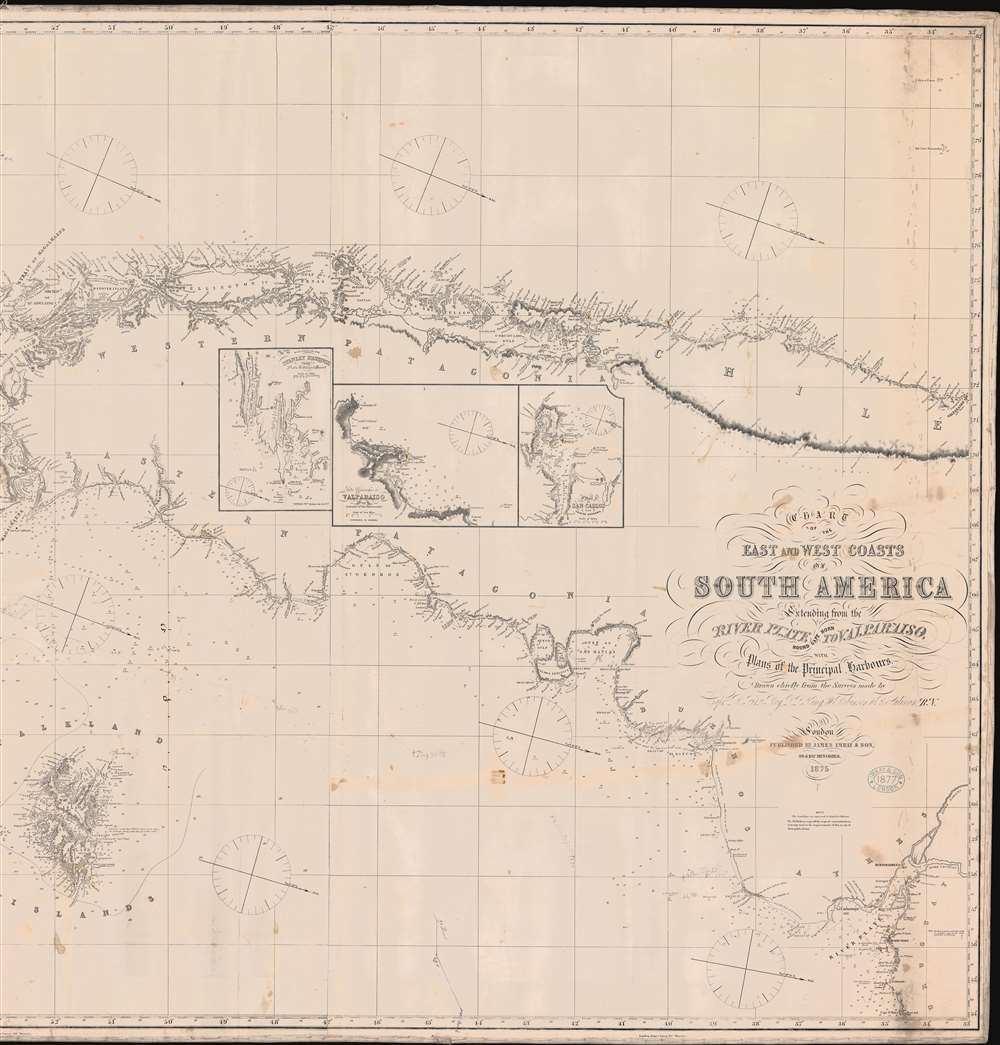 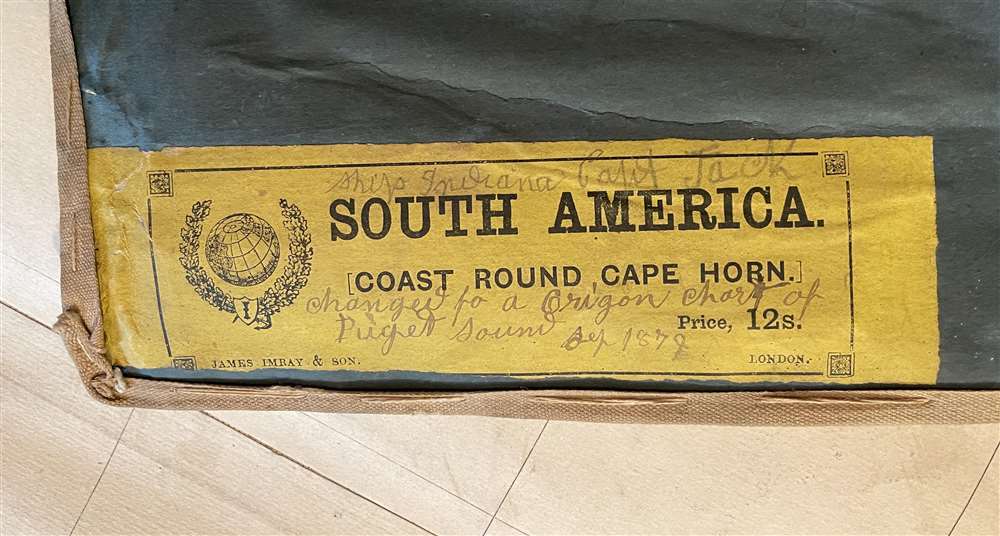 A rare 1874 Imray and Son blueback nautical chart illustrating the southern part of South America, the Straits of Magellan, Cape Horn, Patagonia, and the South Shetland Islands. The map includes pencil annotations recording Captain Robert Jack and the Clipper Indiana particularly harrowing 1879 transit around Cape Horn, where the ship was repeated driven south by the notorious williwaw winds, before eventually exiting the treacherous conjunction of oceans. Jack himself was a known Maine sea captain whose letters have been preserved and offer priceless insights into seaman life in the late 19th century. The map is oriented to the east, and coverage extends from the Rio de La Plata to the South Shetland Islands, and covers Cape Horn on both the Atlantic and Pacific. Detailed insets detail important ports, as well as the Strait of Magellan - with charming place names such as 'Useless Harbor'.

Capt'n Jack and the Indiana

This chart bears a note on the verso associating it with Captain Robert Jack (1812 - 1899) and the clipper ship, Indiana. A native of Bowdoinham, Maine, Jack was described by contemporaries as a vigorous, hearty specimen, the very image of New England manhood, as active at 60, as at 20. He was tenured employee of Sewall and Company, shipbuilders based in Bath, Maine. Jack sailed many Sewall ship, but in this case, he was given the Indiana, and charged with sailing it to San Francisco. The Indiana, was built by Sewall, 1488-ton clipper, launched from Bath on October 31, 1876. This map likely records Indiana's 1879 voyage around Cape Horn for San Francisco. An extensive archive of Jack's letters survives in the Maine Maritime Museum, Bath - some of which describe this very voyage. Moreover, the handwriting on the chart matches Jack's crude script. It was a rough voyage, but the ship arrived in San Francisco intact, and was refitted. The Indiana plied the San-Francisco - Oregon - Seattle route until 1898, when she was sold to the Alaska Packers Association of San Francisco operation with their salmon canneries in Alaska. Jack went on to other voyages, eventually returning to Bowdoinham, where he lived out his days in retirement.

This chart was printed by James Imray and Son of 89 and 102 Minories, London in 1875. The present map bears an 1877 hand stamp, suggesting updates or at least retained accuracy to that date. The hydrography is largely the work of the British Royal Navy in the 1850s, particularly Capt. R. Fritz Roy, L. L. King, W. Robinson, and B. Sulivan. We note recorded examples issued by James Imray himself dated as early as 1851. The earliest surviving example we have noted is 1853 (Atwood House Museum of the Chatham Historical Society). We know of no other examples in this edition.