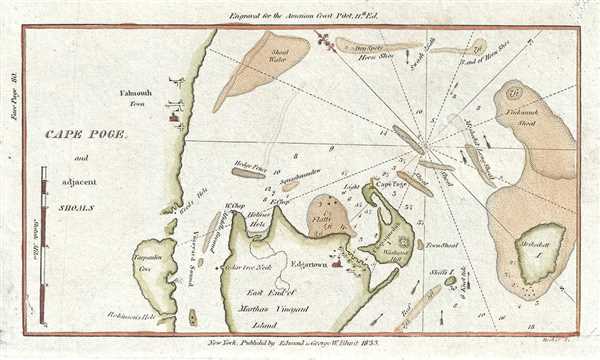 This is a scarce and beautiful 1833 nautical chart or maritime map of Cape Poge, Martha's Vineyard, Massachusetts. It covers the region including parts of Cape Cod, Martha's Vineyard Island, Chappaquidick Island and Muskeget Island. The towns of Falmouth and Edgartown are identified. It depicts most of the Island of Martha's Vineyard, though it does cut out the western part of the Island. Woods Hole, Holmes Hole, Robinson's Hole Tarpaulin Cove and Cedar tree Neck are all identified. Various shoals are noted, along with some depth soundings and relief shown by hachure. The Holmes Hole Lighthouse, West Chop, and the Cape Poge Lighthouse, made famous in the movie 'Jaws' are both identified. This map was engraved by Hooker Sc. for issue in the 11th edition of the American Coast Pilot published by Edmund and George W. Blunt in 1833.