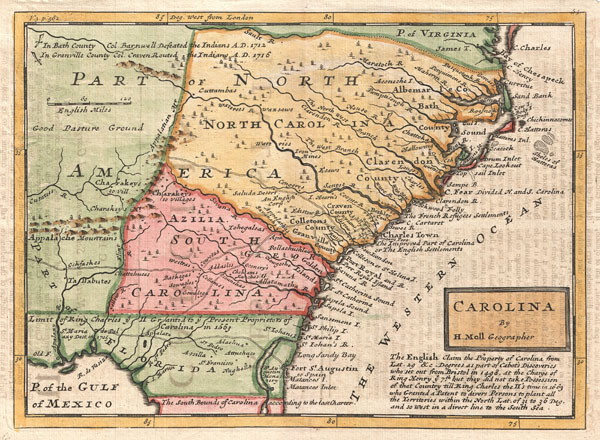 The first printed map to name many of the coastal Carolian islands.

A small but significant 1729 map of Carolina by Herman Moll. This map covers from the mouth of the Chesapeake to St. Augustine and from the Atlantic westward to the mouth of the Apalache River, encompassing the entire territory defined by the Carolina Grant of 1663 as well as additional territory in modern day Georgia and Florida added in a later revised grant. Moll notes the principal roadways along the coast as well as many important trade routes leading westward into American Indian lands. Along the coastline several islands are identified for the first time in a printed map. Also noted are various battles including the 1705 destruction of the mission of St. Maria de Palaxy along the Gulf Coast, Colonel Barnwell's 1712 defeat of the Tuscarora (the first major military victory by Carolina settlers over an Indian nation), and Colonel Craven's 1716 route of the Yamasee.

More importantly (and interestingly) this is also one of the few maps to depict the fanciful utopian colony of Azilia in modern day Georgia. In 1717, sixteen years before Georgia was founded, Sir Robert Montgomery proposed the creation of the Margravate of Azilia. The plan, laid out on a bold scale, would generate a buffer zone between the Carolina Colony and French, Spanish, and Indian incursions from the west. The colony never materialized largely due to lack of interest, but Moll's inclusion of it here marks this as one of the earlier examples of this map. In the later editions Azilia is replaced by 'Georgia.'

This map was issued in a number of different states from 1729 to about 1750. This particular example was issued in volume three of Samuel Simpson's The Agreeable Historian published in London in the 1740s.