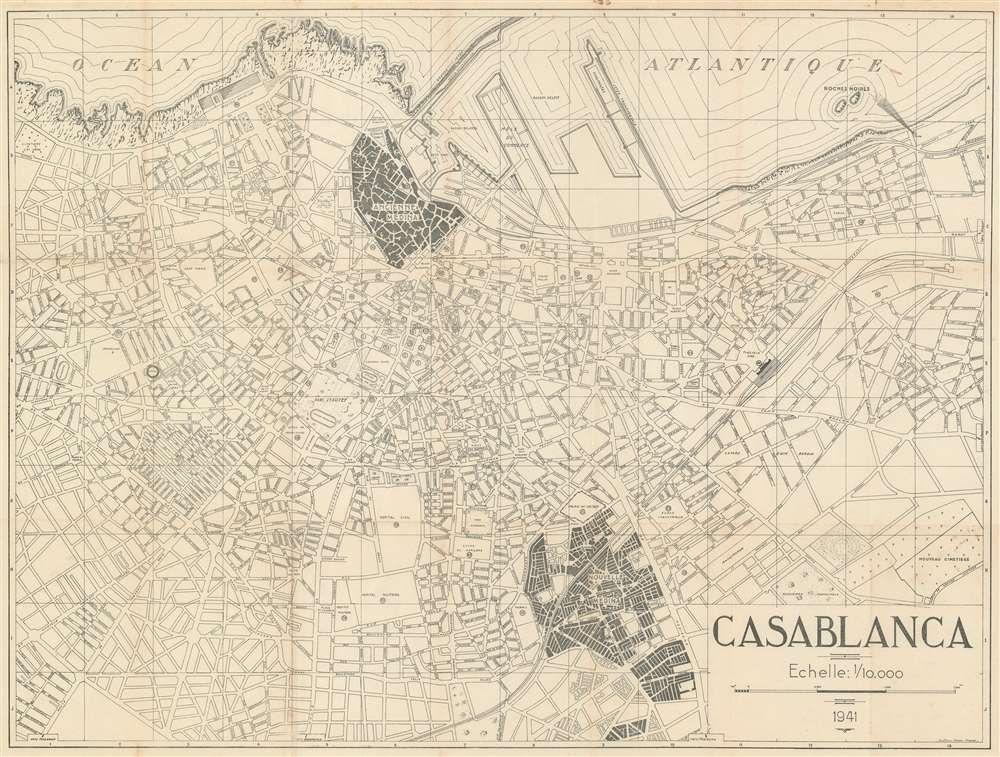 Created a year before the classic film Casablanca was released.
$850.00

This is a 1941 Editions Maroc-Presse city map or plan of Casablanca, Morocco. Created in 1941 at a time when Casablanca was the final stopping point for refugees fleeing World War II through North Africa. It was a strange and turbulent time for Casablanca, as romanticized in the classic Humphrey Bogart film Casablanca. The map depicts the city from the Cimetiere d'El Hank to the new cemetery and from the Atlantic Ocean to the new medina. Streets, squares, and roundabouts are labeled throughout. So too are the city's schools, hospitals, churches, parks, and numerous other locations. The port is illustrated in detail, with over fifty locations numerically identified, although the corresponding index has been lost.

By 1941, when this map was originally issued, Morocco had been a French protectorate since March 30, 1912. When France entered World War II, The Moroccan sultan declared Moroccan allegiance to France and offered aid. Within less than a year, France had suffered a humiliating defeat at the hands of Nazi Germany and had signed a separate peace, allowing Germany to occupy three fifths of France and creating the collaborationist Vichy Regime. As a French Protectorate, Morocco was still governed by France, but become a kind of grey zone. Certain parts of the French government that had been against the treaty planned to continue fighting the Axis powers from the colonies in French North Africa. In this effort, a group of French politicians left for Africa. The treaty was signed while they were in the middle of the Atlantic, and when these politicians arrived in Casablanca, they soon found themselves captives of the collaborationist French government, unable to leave.

The Refugee Crisis and Casablanca

Not long after this harrowing episode, refugees from across Europe began pouring into North Africa while trying to escape persecution in Europe. These refugees ended their trek in Casablanca. Although the introduction to Casablanca oversimplifies the complexities and dangers of escaping from France across the Mediterranean, the screen writers do a masterful job and the iconic nature of their summary cannot be denied

With the coming of the Second World War, many eyes in imprisoned Europe turned hopefully, or desperately, toward the freedom of the Americas. Lisbon became the great embarkation point, but not everybody could get to Lisbon directly, and so a torturous roundabout refugee trail sprang up. Paris to Marseille, across the Mediterranean to Oran, then by train or auto or foot across the rim of Africa to Casablanca in French Morocco. Here the fortunate ones through money, or influence, or luck, might obtain exit visas and scurry to Lisbon, and from Lisbon to the New World. But the others wait in Casablanca, and wait, and wait, and wait…

This map was created by Editions Maroc-Presse in 1941 and published in a bilingual English and French guide to Casablanca in 1943.

Maroc-Presse (fl. c. 1930 - 1960) was a French language daily newspaper published in Casablanca that became known for objective reporting and an 'enlightened' editorial stance during the era of decolonization. It was purchased by Jacques Lemaigre Dubreuil, a hero of the Second World War and businessman, in the spring of 1955, who, in his first editorial as owner, stated that Maroc-Presse would encourage the free expression and exchange of ideas and committed to build a staff of 'independent, far-sighted, and non-partisan' individuals. Even before Lemaigre Dubreuil purchased Maroc-Presse, the paper had renounced the exchange of terrorist and counter-terrorist attacks occurring throughout Morocco, including in Casablanca. Lemaigre Dubreuil's innovations were a surprising success. The people of Morocco, of both French and Moroccan heritage, had never encountered anything close to its 'Open Forum'. Lemaigre Dubreuil and Maroc-Presse were advocating for a non-violent solution to the tensions between France and Morocco, and may have been on the right path. But, just past midnight in the middle of June, Lemaigre Dubreuil was murdered in a counter-terrorist attack leaving him with thirteen machine gun bullets in his back. He died on the way to the hospital. Lemaigre Dubreuil's death shined a light on the reality in Morocco and the problems there. Learn More...