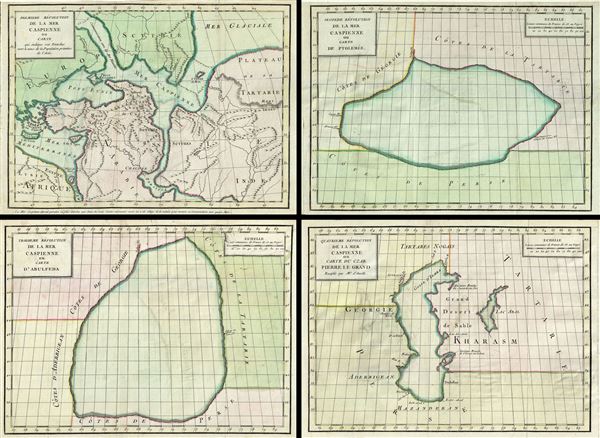 The first map, from upper left, represents a theoretical early period, in which the Caspian sea was connected to other known Asiatic waters, including the Black Sea, the Mediterranean, and the Persian Gulf, and the White Sea. It also connected to a speculative Glacial Sea. The mapping as a whole is curiously reminiscent of Kircher, whose theories may have inspired it. Geographically, it covers from the Mediterranean to India and from the Arctic to the Persian Gulf. Curiosly mountain ranges seem to run beneath the seas. Between the Caspian Sea and the Glacial Sea, the Island of Tazata, a legendary island postulated by Pliny the Elder, is presented. A note at the bottom of this map translates, 'The Caspian Sea should appear here larger than in the following three maps: but has been forced to reduce its communication to show with four Seas.'

The third map illustrates the Caspian Sea as mapped by the 13th century Kurdish historian and geographer, Abulfeda or Abu'l Fida. The map notes the Amu Darya or the Amu River (Gihon or Oxus River). The form of the sea has here evolved significantly and begins, at last, to take on a more north-south orientation. This map depicts the Caspian Sea surrounded by the coasts of Persia, Tartary, Georgia and Azerbaijan.

The fourth map in the series, bottom right, cover both Caspian Sea and Lake Aral. This map marks a significant step forward in the mapping of the region. Around 1718 Russian Tzar Peter the Great, sponsored a number of cartographic expeditions to the farthest reaches of his vast empire. One such was a command to map the Caspain Sea given to Dutch navigator Carl Van Verden. Though well known since antiquity the world's largest lake was largely ignored by surveyors until Van Verden's work in the early 18th century. Van Verden's work was the most advanced mapping of the Caspian Sea to date, offering a new perspective on the region and opening the navigational possibility of the world's largest lake. Peter the Great, Russia's most expansionists Tzar, was determined to make the Caspian a 'Russian Lake' and invaded the region in 1722 seizing Derbent and Baku.

These maps were issued by Delisle de Sales in his 1792 edition of Histoire du monde primitive.