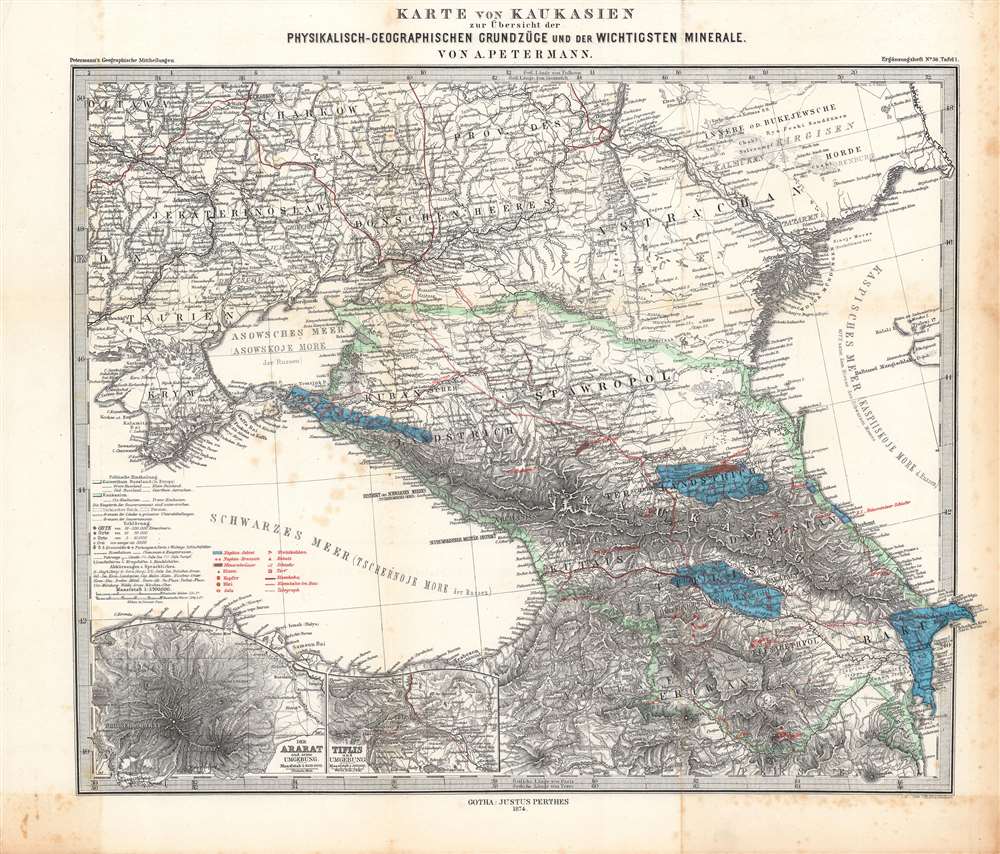 The mining heartland of the Russian empire.
$275.00

Here is a nicely engraved map of the Caucasus region drawn by Augustus Petermann and published by Justus Perthes in 1874. It highlights mineral deposits in a period when mining, railways, and the oil industry were rapidly developing and drastically changing the region.

This map depicts the wider Caucasus region, including the lands between the Black and Caspian Seas (Georgia, Dagestan, Armenia, Azerbaijan) and surrounding portions of the Russian, Ottoman, and Persian Empires, all of which had been hotly contested between the Russians and Ottomans in the preceding decades.

Elevation is measured in Parisian feet while scales are given in German miles and Russian verstes. Longitude is given at the top and bottom margins using Paris, Greenwich, Pulkovo (St. Petersburg), and the Ferro Meridian as Prime Meridians. The two legends explain symbols and abbreviations for a range of administrative, geographic, and economic information, though it appears that the original coloring scheme to distinguish administrative borders has been sacrificed in order to highlight mineral deposits, the main focus of the map.

Shading and symbols indicate areas of petroleum (naphtha) deposits and petroleum wells, iron, copper, lead, salt, coal, shale, and cobalt. Inset maps are provided at bottom-left of Tbilisi and Ararat with their environs. One notable feature is the notation of ethno-linguistic groups, such as German speakers, Jews, and Greeks in the Donbas and the Yekaterinoslav Governorate.

The Russian Empire was keen to exploit the natural resources of its vast territory in the 19th century, and the most convenient places to do so were what is now Poland, Ukraine, and the Caucasus region. Areas illustrated here were among the world's most productive for coal, petroleum, and other natural resources. Imperial bureaucrats facilitated the exploitation of these resources by ensuring the construction of roads, railways, telegraphs, and pipelines, including the Transcaucasus Railway, depicted here as connecting Poti on the Black Sea with Tbilisi and being planned for completion to Baku, a feat accomplished nine years later.

This map was made by Augustus Petermann and engraved by Alt and Stichart (given names and biographical information unknown) of the publisher Justus Perthes in Gotha. It was published in 1874 as Plate 1 of Vier Vorträge über den Kaukasus. von G. Radde, Supplement (Ergänzungsheft) No. 36 to the periodical Petermann's Geographische Mitteilungen. The full distribution of the map is difficult to determine due to inconsistent cataloging but is known to be held by the British Library, the Bibliothèque nationale de France, and the Bayerische Staatsbibliothek, and is scarce to the market. The plate for this map had been in use by Petermann and Perthes since at least 1867, for Stieler's Hand-Atlas, and continued to be used in subsequent editions of that atlas into the 1920s.