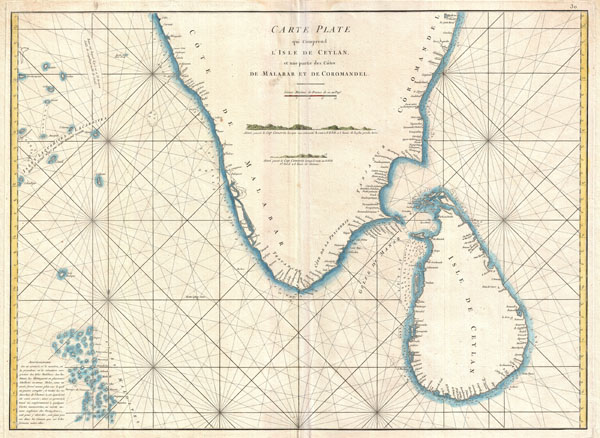 An extremely attractive large format 1775 maritime map or nautical chart of southern India and Ceylon by Jean-Baptiste d'Après de Mannevillette. This chart covers the southern tip of India including the Malabar and Coromandel coasts as well as the Island of Ceylon ( Sri Lanka ) and the Maldives. Extends northwards as far as Cabo and Madras and eastwards as far as the Maldives and Laccadive Islands. Inland detail in minimalist but marine detail is excellent with well-defined coastlines, many rhumb lines, numerous harbors and ports noted, and countless depth soundings. The chart includes two shore profiles focusing on Cape Comorin. Mannevillette's chart marks a considerable advancement over previous nautical maps of this region. Engraved by De La Haye for Jean-Baptiste d'Après de Mannevillette's 1775 Neptune Oriental.

Jean-Baptiste d'Après de Mannevillette (February 11, 1707 - March 1, 1780) was a French sailor, navigator, and hydrographer active in the mid-18th century. Mannevillette was born in Le Havre to a family of wealthy seafarers. As a young man he studied mathematics and navigation in Paris before earning his sea legs as a commissioned officer on the merchant vessel Marechel d'Estrees bound for the West Indies. Mannevillette eventually attained the rank of Captain with the Compagnie des Indes. In the course of numerous voyages around Africa to India and China, Mannevillette collected and revised a number of regional nautical charts. His sophisticated use of the most modern instruments, most specifically the Octant or English Quarter, and keen mathematical mind enabled Mannevillette to correct many significant errors common to earlier maps of the region. These updates were eventually compiled and published in Mannevillette's most significant work, the 1745 Neptune Oriental. The Neptune Oriental was well received by navigators and earned him admission into the Academy of Sciences. Eventually he took a position with the French Hydrographic department and in 1775 republished his opus in a greatly expanded format. In 1767 King Louis XV conferred the Order of St. Michael upon him and made him an associate of the Royal Marine Academy. Mannevillette died on March first of 1780 at 75 years of age.

National Library of Australia, MAP Ra 49 Plate 30.
Looking for a high-resolution scan of this?