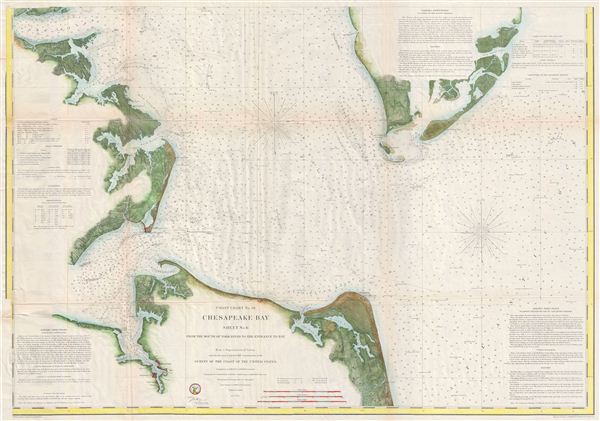 A scarce example of the 1863 U.S. Coast Survey nautical chart or maritime map of the entrance to the Chesapeake Bay. This Civil War era map covers from the York River east to Cape Charles and south as Far as Cape Henry, Norfolk, and Portsmouth. Includes the Hampton Roads, Fortress Monroe, and the town of Hampton. Offers innumerable depth sounding throughout. Text to the left and right of the map proper includes sailing instructions, notations on light houses, magnetic variations, tide and currents. Title of chart in the lower center.

This map was made at the height of the American Civil War. At the time, the Union, from its stronghold at Fort Monroe, was determined to control naval access to the Chesapeake Bay and its adjacent river systems. This chart provided crucial information to the Union Naval officers who enacted a blockade of the Chesapeake. Military action based from Fort Monroe eventually drove President Jefferson Davis from the Confederate capital of Richmond, Virginia, effectively ending the War.

The triangulation and topography for this map was accomplished by e. Blunt and J. Farley. The Topography is the work of J. J. S. Hassler, G. D. Wise, J. Seib, and J. Mechan. The Hydrography was completed by a party under the command of J. J. Almy. The whole was compiled under the supervision of A.D. Bache, director of the U.S. Coast Survey. engraved by J. Knight, A. Sengteller, H.S. Barnard, and J. C. Kondrup for the 1863 edition of the U.S. Coast Survey Superintendent's Report

Bache, A. D., Report of the Superintendent of the United States Coast Survey, Washington, 1863.