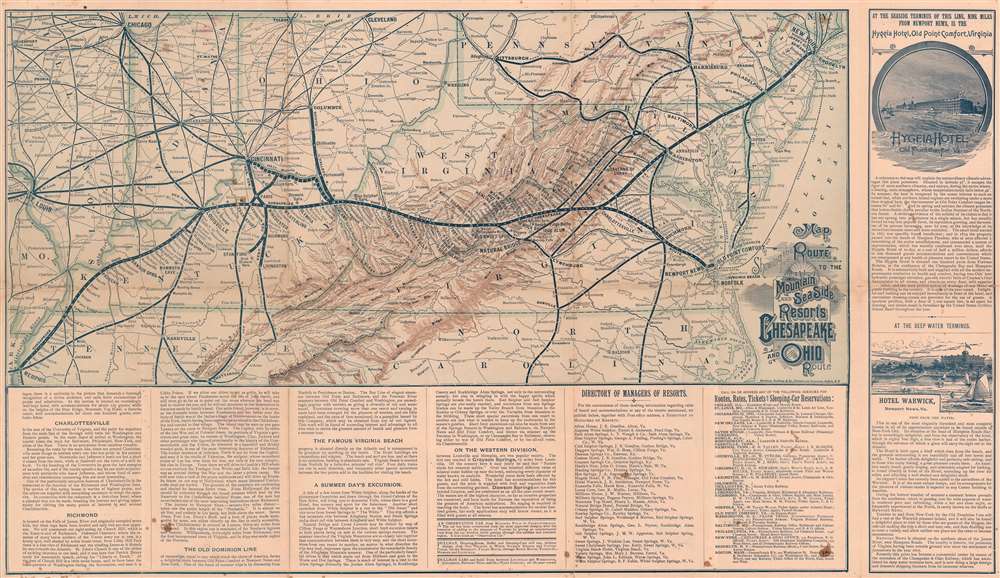 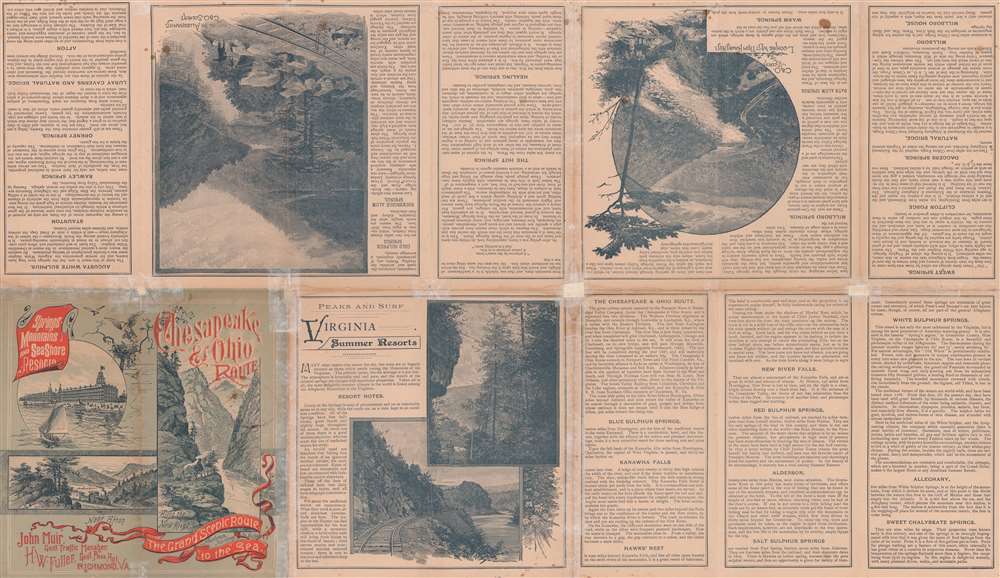 This is a c. 1885 Matthews Northrup railroad map of Virginia and Kentucky highlighting the Chesapeake and Ohio Route, also known as the Chesapeake and Ohio Railway. Connecting Memphis, Tennessee and Newport News and Old Point Comfort, Virginia, a thick black line highlights the route of the Chesapeake and Ohio Railway. Stops along the route, including Richmond, Charlottesville, and Louisville, are identified. The routes of connecting railroads, including the Philadelphia, Wilmington, and Baltimore Railroad, the Pennsylvania Railroad, and the Baltimore and Ohio Railroad, are traced by thinner black lines. Very thin black lines detail the rest of the region's railway network. Cities, towns, and villages are labeled throughout, along with mountain ranges and rivers. Information about the railroad and potential destinations is included along the bottom border and on the verso. Advertisements for the Hygeia Hotel in Old Point Comfort and the Hotel Warwick in Newport News occupy the space to the right of the right border.

The Chesapeake and Ohio Railway

The Chesapeake and Ohio Railway and its predecessors played a vital role in the westward expansion of Virginia. The railway began in 1836 with the founding of the Louisa Railroad in Louisa County, Virginia. It also has roots in the James River and Kanawha Canal Company, which was founded in 1785. The Louisa Railroad ran its first train on December 20, 1837. The railway continued to expand southeast and west and was renamed the Virginia Central Railroad. When the Virginia Central encountered the impossibility of crossing the Blue Ridge Mountains, the Commonwealth of Virginia incorporated and financed the Blue Ridge Railroad to accomplish that task while the Virginia Central began building west of the mountain range. During the American Civil War, the Virginia Central became a crucial railway line for the Confederacy. By the end of the war, only five miles of track were still operational, and the railroad had $40 in gold in the bank. To rebuild the railroad, the Virginia Central (which would soon be renamed the Chesapeake and Ohio) succeeded in recruiting Collis P. Huntington, a New Yorker and one of the major financiers of the Central Pacific portion of the Transcontinental Railroad. With Huntington's investment, the C and O quickly rebuilt and regained its stature as one of the most important regional railroads. The railroad reached Newport News in 1881 with the completion of the Peninsula Extension. Huntington lost his controlling interest in the railroad to J.P. Morgan and William K. Vanderbilt in 1888, but the railroad continued to prosper. Through numerous acquisitions, the railroad expanded and succeeded throughout the rest of the 19th and through the mid-20th century. The C and O affiliated itself with the Baltimore and Ohio Railroad in 1963, helping to launch the modern era of railroad mergers. Then, it became a founding member of the CSX Corporation in 1980, which is now one of the four major railroad systems in the United States.

This map was created by Matthews, Northrup and Company c. 1885 for the Chesapeake and Ohio Railway. While undated, the presence of the Richmond and Allegheny Railroad suggests that this piece predates 1888, when the Chesapeake and Ohio began leasing the rights to that railroad's trackage. This is the only known cataloged example of the present map. An OCLC reference exists for a map bearing the same title dated to 1905.