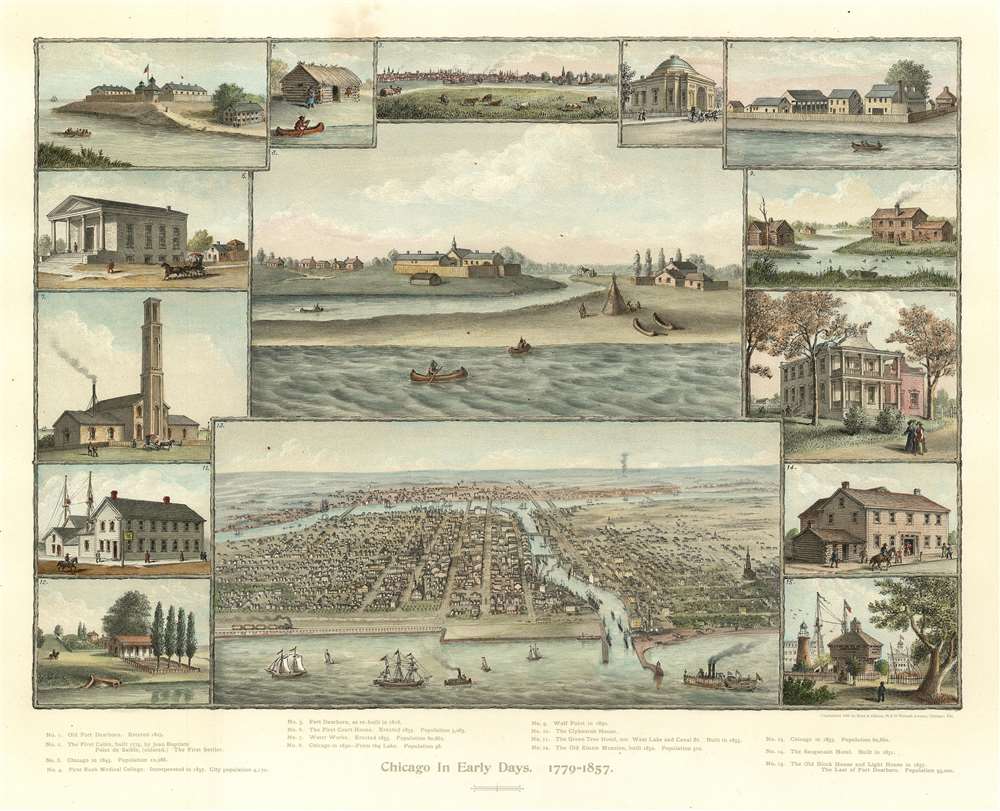 An exceptionally beautiful 1893 Kurz and Allison view of Chicago, Illinois, issued in 1893 to capitalize on the Columbian Exposition or Chicago World's Fair. The image consists of several iconic views of Chicago centered on two contrasting views, Chicago in 1830, three years prior to its founding, appearing at center; and Chicago as a bustling port city, bottom center. The dichotomy presented here underscores the central points of the view - growth, industry, recovery, and prosperity. Surrounding the main view are smaller vignettes illustrating Old Fort Dearborn, the First Settler, Wolf Point, the First Court House, First Rush Medical College, and the Water Works, to name a few.

The 1893 Columbian Exposition or Chicago World's Fair was a pivotal moment in the history of the United States. Chicago, keen to parade to the world its remarkable recovery from the disastrous 1871 Great Fire of Chicago, won the right to host the World's Fair over New York, Washington D.C., and St. Louis. During its six-month run, nearly 27,000,000 people attended the Columbian Exposition, correlating to roughly half the 1893 population of the United States. Its numerous displays and exhibits established conventions for architecture, design, and decorative arts, in addition to initiating a new era of American industrial optimism.

This view was issued in a single edition by Kurz and Allison for sale at the 1893 Chicago World's Fair.

Library of Congress, PGA - Kurz and Allison--Chicago in early days ... (D size) [PandP].
Looking for a high-resolution scan of this?