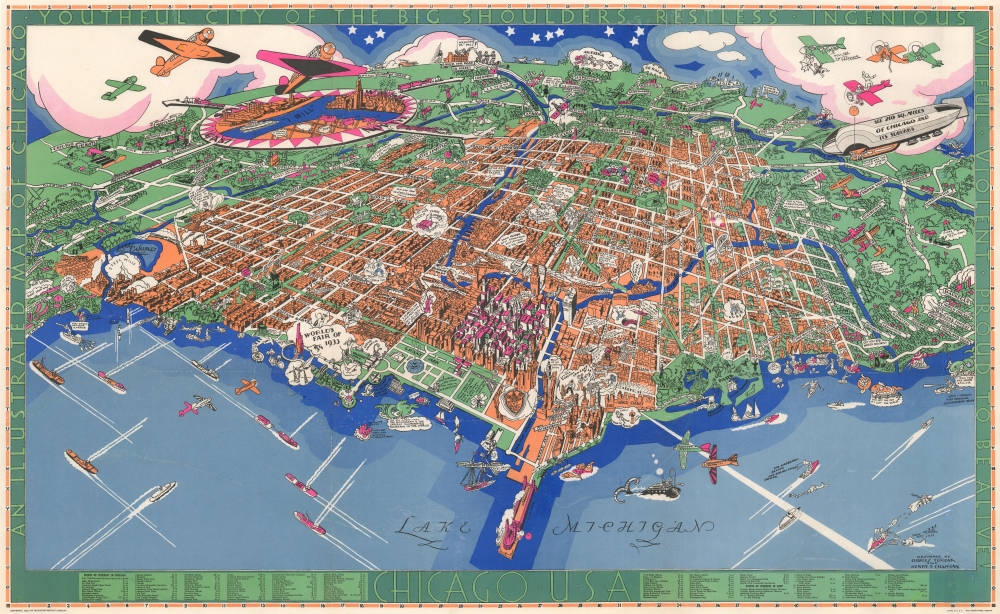 Art Deco Prohibition view of Chicago as a mirror of the United States!
$2,000.00

An extraordinary 1931 large-format pictorial art-deco view and map of Chicago by Charles Turzak and Henry T. Chapman. Chromolithographed in 'five gay colors', the view humorously embraces Chicago as seen from a highpoint over Lake Michigan, to the northeast. It is centered on the Loop business district, and embraces urban Chicago from the Calmut to Highland Park, and inland as far as Wheaton. Turzak and Chapman's Chicago bustles with life, from 1930s airplanes filling the sky, and fast boats on Lake Michigan, to fast cars, sunbathing beauties, and an enormous blimp. Everything is embraced with wit and charm, from gang wars to Wrigley Tower ('Built of 5¢ Chewing Gum'), to bootlegging. The map, moreover, argues in its form for Chicago as a microcosm of the United States, a message reinforced by the upcoming 1933 Century of Progress World's Fair. The whole is surrounded by an art deco border that defines Chicago, 'youthful city of the big shoulders, restless, ingenious, willful, violent, proud to be alive!'

Chicago as a Microcosm of the USA

It does not escape our notice that the Turzak/Chapman view of Chicago positions the city in a grand context as a microcosm of the United States itself. The curvature of the Earth on the horizon, with a starry sky above, suggests globality. The form of Chicago is presented on an unusual southwesterly projection, from a fictitious position high above Lake Michigan. The artists take advantage of creative distortion such that Chicago mimics the eastern half of the United States. The Navy Pier matches Florida. Lake Michigan and the Chicago shoreline to the right correspond to the Atlantic seaboard, with the lakes in Lincoln Park representing the Carolina Outer Banks, with recognizable Albemarle and Pamlico Sounds. To the left of the Navy Pier / Florida, Lake Michigan becomes the Gulf Coast and site of the 1933 World's Fair roughly corresponding to New Orleans. The Chicago River, loosely representing the Mississippi, extends inland, dividing at Wolf's Point into two other great rivers, presumably analogous to the Missouri and Ohio. Where the North Shore Channel winds back to rejoin Lake Michigan at Gibson Park, one recognizes a similarity to the Hudson River and New York. Even further north the course of the Des Plains River, matches the Saint Lawrence. The eastward trend of the southern shore of Lake Michigan and East Chicago matches the curve of Texas, with the Calumet roughly corresponding to Galveston Bay. Turzak and Chapman thus suggest their vision of Chicago as the beating heart of the United States, which bears the weight of the nation upon its 'big shoulders', underscoring the point, as Chicago goes, so too does America.

While most large American cities saw a rise in organized crime and the opening of countless speakeasies, Chicago was perhaps the most famous 'gangland' city. With its close proximity to Canada (where spirits remained legal) via the Great Lakes, and central location as a railroad hub and port, low-paid corrupt police force, and large wealthy population, Chicago was ideally suited to act as a nexus for the illegal import, manufacture, and distribution of alcohol. Powerful crime lords rose to dominate Chicago, where they became popular cultural figures, with robin-hood-like notoriety, who were welcome in high society, business, and political circles. References to prohibition on this map are reserved, but omnipresent. A boatman near Highland Park, being pulled over by a giant fish, exclaims 'Gosh I thought I was Drinking Government Stuff,' referencing the non-alcoholic spirits issued by the Federal Government. Further out, a patrol boat exchanges machine gun fire with a bootlegger, while a nearby fish sings, 'How Dry I am!'

Pictorial qualities have been common in cartography from at least from the 16th century, when publishers like Braun and Hogenberg incorporated view-like qualities and other pictorial elements into their famous city plans. Braun and Hogenberg, and similar cartographers, issued their town books to express, not necessarily the geography of their subjects, but rather the 'essence' of the town/city. As mathematics and surveying principles became more advanced, travel increased, and the ability to translate 2 dimensional cartographic perspectives into an understanding of the actual world became commonplace, maps themselves transformed. This trend is a recognizable progression that evolved cartographic conventions from the 17th to the 19th centuries. By the late 19th century most maps had become geographical tools that illustrated the region cartographically, but failed in the original raison d'être as expressed by Braun and Hogenberg, to illustrate a place's 'essence'. So, where a city map of 19th century Paris might provide a completely navigable presentation of the city, one could glean almost nothing of Paris' character from it. In the late 18th century, the first modern 'pictorial' style maps developed. These maps, like Tomas Lopez's 1788 map of Seville, attempted to provide both cartographic accuracy and pictorial elements that might convey the character of the city. In that case, Lopez incorporated pictorial vignettes to illustrate important buildings and monuments. This style became increasingly common throughout the 19th century and early 20th centuries, particularly for centers of commerce like London, Paris, and Rome, where they were often mass produced and referred to as 'monumental' maps. The style further evolved in the early to mid-20th century, when revolutionary cartographers and illustrators like MacDonald Gill, Jo Mora, Frank Dorn, Ernest Dudley Chase, and many others, combined vignette style illustrations, modern printing techniques, inspiration from Japanese printmaking and manga, and from clever satirical cartographers/artists like Fred Rose, to produce maps that once again focused on revealing the essence a place, usually, but not always, at the sacrifice of cartographic precision.

This map was drawn by Charles Turzak and Henry Thomas Chapman and published in 1931 by the Houghton-Mifflin Company. It was printed in Boston by Tudor Press, prominent chromolithograph printers in the mid-20th century. The original artwork by Turzak and Chapman survives, today in a private collection. We are aware of only one edition. Scarce to the market.

Charles Turzak (August 20, 1899 - January 31, 1986) was an American painter, muralist, woodcut engraver, commercial illustrator, teacher, and print maker. Born in Streator, Illinois, to Czechoslovakian immigrants, Turzak exhibited artistic talent early, drawing, painting, and even carving peach seeds into small monkeys and then selling them for pennies. He continued drawing cartoons through high school, when his art was inspired by World War I. When graduated high school in 1920, he won a cartooning contest sponsored by The Purina Company of St. Louis, Missouri. The prize money facilitated his continued art education at the Art Institute of Chicago, over the fierce objections of his coal miner father. He graduated in 1924. Exhibitions and strong print sales led to a career in commercial illustration. He traveled to Europe in 1929, returning just in time for Black Tuesday (October 29, 1929). Turzak married Florence Cockerham, a journalism student at Northwestern, in May 1931. During the Great Depression, he made money illustrated books with woodcuts. He and Florence had a daughter in October 1936, and in 1938 he commissioned architect Bruce Goff to build a family home in Edison Park, designated a Chicago landmark known as the Turzak House. He continued to produce work throughout the 1940s and became the art director for two Chicago-based publishers. He and Florence moved to Florida in 1958 His final solo exhibition was held in May 1985 at the Winter Park University Club. Turzak is formally credited with just two maps, a magnificent 1931 art-deco style pictorial view of Chicago, issued with Henry T. Chapman, and the 1932 World Wide Short Wave Radio Map. It is argued by some that, around the same time, he may have worked on the aesthetically similar but anonymous Gangland Map of Chicago, potentially the greatest pictorial map of all time. Learn More...


Henry Thomas Chapman (May 19, 1897 - July 28, 1970) was a Chicago based commercial artist active in the middle part of the 20th century. Chapman was born in Fargo, North Dakota and studied art and architecture at the Art Institute of Chicago. After graduating he settled in Highland Park, Chicago, where is met with considerable success as an advertising artist. He married fellow artist Elizabeth Alice Hooper (1904 - 1970) c. 1928. In the 1950s, he relocated to Panama City, Florida, where he appears in local directories as an architect and draftsman. Both Chapman and his wife died in 1970, within a few months of one another. Learn More...

Good. Laid down, poster style, on linen. Some wear along original fold lines, with minor repairs and infill here and there.