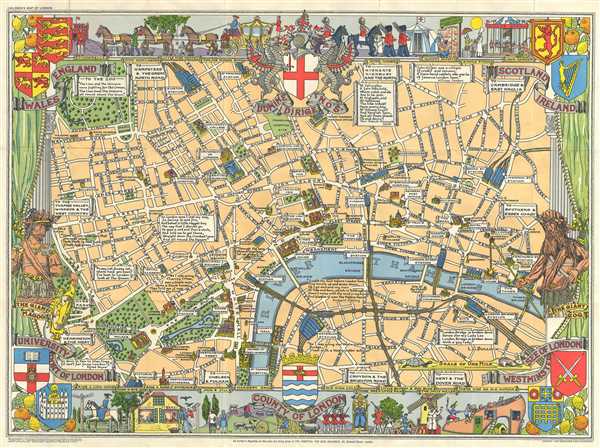 Charming pictorial map of London intended for use by children.

A colorful and attractive c. 1955 pictorial map of London printed by John Bartholomew & Sons. The map covers central London from Hyde Park to Aldgate and from Green Park to Waterloo Station. Issued to raise funds for the Hospital for Sick Children, Great Ormond Street London, the map identifies most major roads with important buildings rendered pictorially. The whole is filled with charming quotations from various authors ranging from Rudyard Kipling, Alfred Noyes, Benjamin Franklin, and others. The whole is surrounded by decorative work intended to represent London life and folklore. Printed and published by John Bartholomew and Sons ltd.

Very good. Minor wear along original fold lines, including some rips and holes over fold intersections.
Looking for a high-resolution scan of this?