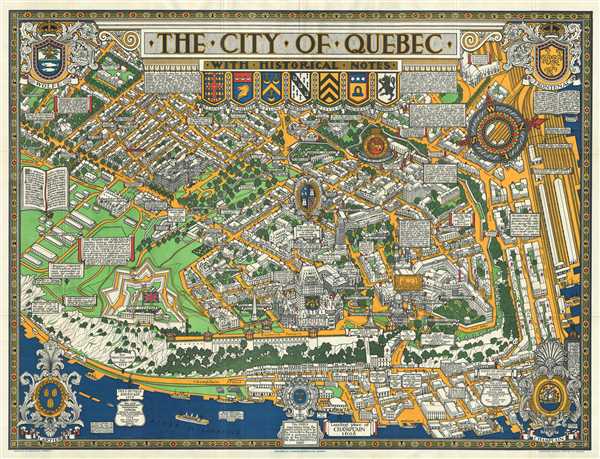 This is an exceptional 1932 bird’s eye view map of the city of Quebec, Canada by Samuel Herbert Maw. This pictorial map beautifully captures the old city of Quebec in exceptional detail with the St. Lawrence River around it. Individual streets are noted, with every buildings, monuments and parks illustrated beautifully. Several Coats of Arms adorn the map, with an elaborate compass rose in the top right quadrant.

Interesting historical facts are noted throughout. Some of these include ‘Site of the Prescott Gate’, ‘Approximate position of Boom placed across the River St. Charles’, ‘Remains of British fortifications which were constructed in 1785 by order of General Haldimand’, ‘St. Matthews Cemetery The burial place of Thomas Scott brother of Sir Walter Scott’, ‘In 1533 Cartier discovered the river to which he gave the name of Saint Lawrence upon whose festival day it was discovered’, and several others. A note in the bottom right corner states ‘this map commenced in 1926, completed in 1932 was drawn by S. H. Maw. Dimensions & proportions must not be taken seriously it being the intention of the author only to amuse & instruct.’ This map was printed by Alexander and Cable Litho. Co. Ltd., and published by Librairie Garneau Ltee.

Samuel Herbert Maw (September 12, 1881-1952) was a English engineer, architect, photographer artist, and graphic designer active in Quebec during the first half of the 20th century. Maw was born in England where he attended the Ackworth School. Although not formally trained as an architect, he apprenticed with John. S. Dorden of Ipswich and Edward W. Mountfort, of London. From about 1904 on he worked as a draftsman with the London firm of Bradshaw, Gass and Bolton. In 1912 Maw emigrated to the United States where he became a partner in the firm of Brown and Maw. This must not have worked out, because he relocated to Toronto later in the same year, taking a position with the firm of Darling and Pearson. Maw moved from firm to firm within Canada, briefly working in Toronto, Montreal, Ottawa, and Halifax. During World War II, Maw was assigned to the Engineering and Maintenance Branch of the Naval Service Department in Ottawa. He produced pictorial maps of Quebec City (1932), Montreal, Ottawa (1944), and the Gaspé Peninsula (1929). When Maw died he was working on a similar map of Halifax, but it is unclear if it was ever completed or published. Learn More...