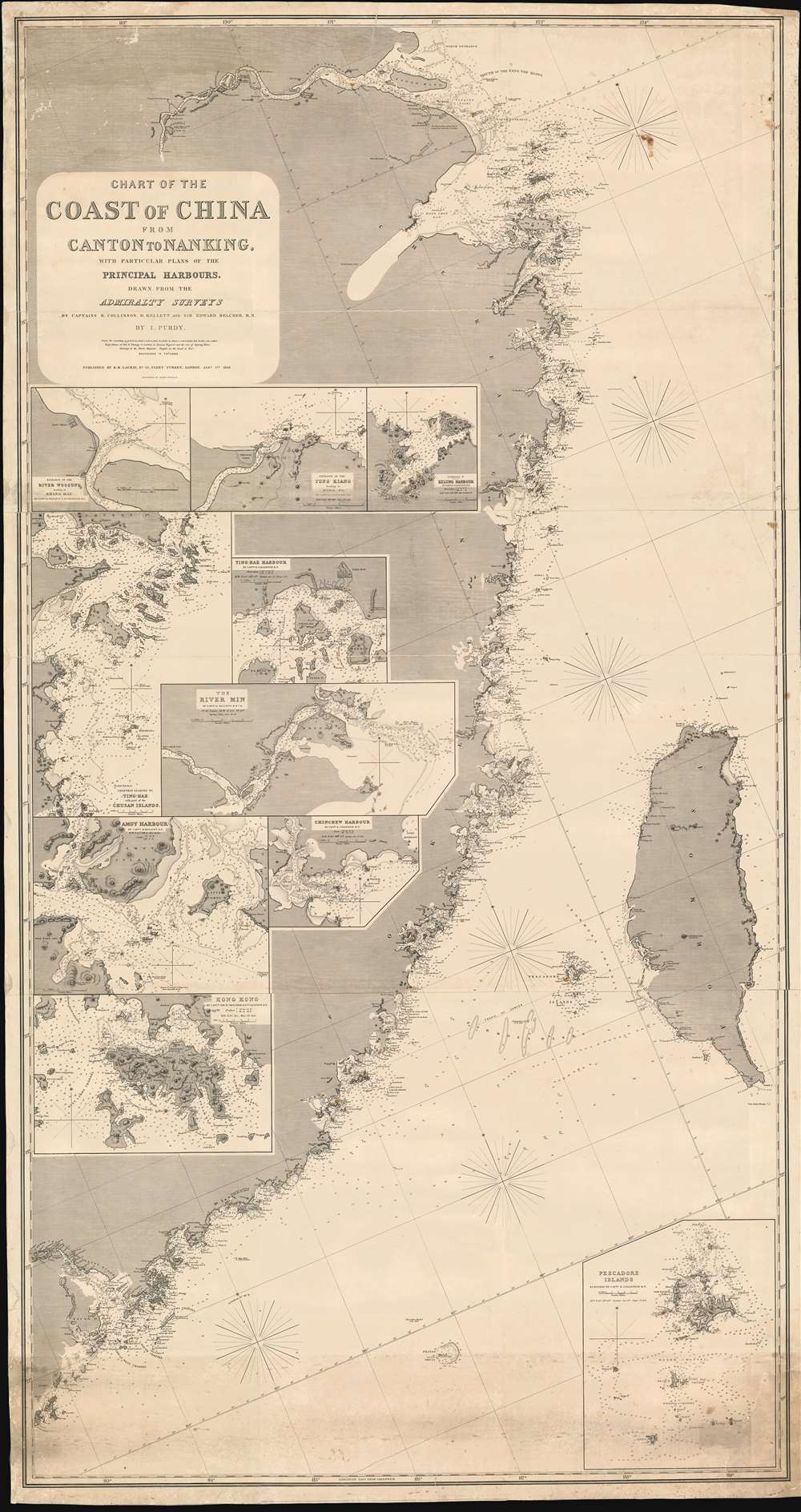 The height of the China Trade on one chart! Belcher's Hong Kong! Collinson's survey!

An exceptionally rare and important 1865 nautical chart or maritime map of the coast of China compiled by John Purdy from the surveys of Sir Edward Belcher (Hong Kong), Richard Collinson (China Coast), and Henry Kellett (China Coast) - probably the best general map of the China coast then obtainable. The map's coverage extends from mouth of the Yangtse River (Nanjing and Shanghai) south as far as Hong Kong and Macao, and east to include Taiwan (Formosa). The chart includes nine insets, among them a large representation Collinson's update of Belcher's First Opium War Hong Kong survey of 1841. This map, made after the second opium war, represents the high point of the China Trade when cities like Shanghai and Hong Kong were transforming into global centers of trade and commerce, largely at the expense of an increasing angry and frustrated Chinese populace

Following their humiliating defeat during the Second Opium War (1856 - 1860), the Qing entered a period of sharp decline. The humiliation of the Qing army by a relatively small Anglo-French military force (outnumbered at least 10 to 1) coupled with the flight (and subsequent death) of the Xianfeng Emperor, and the burning of the Summer Palaces, was a shocking blow to the Chinese populace. The Self-Strengthening Movement or Western Affairs Movement (自强运动), a series of social and economic reforms intended to modernize China followed, among these the adoption of Western firearms, machines, and scientific knowledge. While such efforts focused in European influenced urban centers, the rural interior of China became increasingly unstable. The ongoing Taiping and Nian Rebellions, bent on overthrowing the Qing, increased their power, laying siege unsuccessfully to Shanghai (1860) and Beijing (1865). At the same time, the international treaty ports, established during the Opium Wars, led to increase trade activity and western influence, for better or worse, throughout coastal China. Foreign excesses and intrusions would, by 1900, lead to the bloody Boxer Rebellion.

This map was first published in 1851, following the Collinson and Kellett Survey of the coast of China (1842 - 1846) and Belcher's work in Hong Kong (1841). That edition, of which only one examples is known (British Library BLL01004820286) was signed by John Purdy, who probably compiled the chart. The present example was resurrected and updated with the 'I. Purdy' imprint by Purdy's grand-nephew Isaac Purdy in 1865. The engraving is the work of Alexander George Findlay, who, dispute the R. H. Laurie imprint, was probably also the 1865 publisher, as he had, by this time, taken over the deceased Laurie's business.

Exceedingly rare. There is only a single other known example of the present 1865 chart, held by the National Library of Australia. That example was loaned to the Hong Kong Maritime Museum for their 2015 exhibit Charting The Pearl River Delta. The 1851 chart is held in a single surviving example by the British Library.

Isaac Purdy (May 22, 1804 - September 1852) was a British hydrographer and engraver active in the second quarter of the 19th century. Purdy was born in Middlesex, England, the son of a gunsmith and the nephew of the cartographer and hydrographer John Purdy. He worked for the firm of Richard Holmes Laurie as an engraver and hydrographer before transitioning to the Admiralty sometime in 1851. Several nautical charts from the 1840s and as late as 1851, bear his imprint. He should not be confused with Isaac Purdy 2 (fl. c. 1840 - 1869), a relative and also a hydrographer. Learn More...